The firm is expanding its presence in the Tar Heel State, with several projects underway. 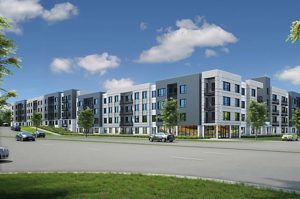 Madison Communities, the development arm of Madison Capital Group, has begun its construction of Madison Ashley Park, a four-story, 253-unit luxury apartment community in Charlotte. Madison is partnering with The Carlyle Group to procure the project’s funding.

Benco Construction will provide building and contracting services for the development. After the project’s completion, each unit will feature luxury finishes, and residents will have access to a swimming pool, clubhouse, fitness center, lounge and outdoor cabanas. Situated at the intersections of Wilkinson Boulevard and West Morehead Street, the community will be located within 2 miles of Charlotte’s Center City district, in addition to being within walking distance of numerous suburbs and public parks.

Madison has continued to expand its presence around the Tar Heel State, with projects underway in Raleigh, Ashville and Charleston. Elsewhere, the developer has recently begun its construction of Madison Watergrass, a 288-unit community in Wesley Chapel, Fla. The firm has also been active in the self storage market, buying up two portfolios in Ohio and Dallas.

In nearly all of its metrics, Charlotte has remained a solid market for multifamily investment and development, even in the face of larger economic uncertainty. Bolstered by an in-migration of residents, strong employment opportunities, and more affordable costs of living when compared to other areas in the Sun Belt, the city has seen promising demand, even as it struggles with the delivery of new units due to supply and labor shortages. As of June 2022, the city’s rent growth rate of 1.3 percent was 20 basis points above the national average, with demand particularly directed toward luxury and lifestyle communities, according to Yardi Matrix data. Over the same period, the city had 21,470 units in its pipeline, in addition to another 84,000 units in the preliminary stages of development, the same data shows.