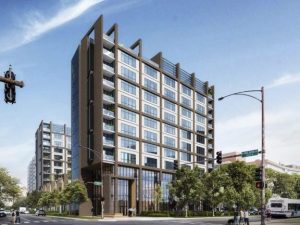 Lincoln Property Co. has received approval for the complete building permit for a luxury high-rise multifamily development in Uptown Chicago that will feature more than 300 units. The general contractor is Gilbane Building Co., and the design was provided by Valerio Dewalt Train.

The project will offer studio, one- and two-bedroom floorplans. Community amenities will include a grand lobby with café bar, clubroom, 12th story private dining room, as well as remote work spaces. As reported by Urbanize Chicago, the development broke ground in October 2022.

Located at 4600 N. Marine Drive, the site was formally a parking lot of the Weiss Memorial Hospital. The community will be situated off Highway 41, roughly 7 miles from downtown Chicago and within walking distance of Montrose Beach. The Uptown neighborhood offers a variety of retail and dining options, as well as entertainment venues such as The Riviera Theatre and The Black Ensemble Theater.

According to a newsletter by Chicago’s 46th ward Alderman James Cappleman, the $90 million development is slated to come online in the fall of 2024. In order to comply with the Affordable Requirements Ordinance, the community will include 8 affordable units. Moreover, the developer also paid $3.1 million in-lieu fees to Sarah’s Circle for the development of a fully affordable 28-unit project.

Gilbane’s Vice President Jim Arends stated in prepared remarks that the company is eager to support Lincoln Property Co. and the Uptown Chicago community by delivering elevated housing experiences. The firm has recently received financing for the development of a transit-oriented mixed-income D.C. project.