The 413,000-square-foot property is located in the Dutch Kills section of Long Island City. 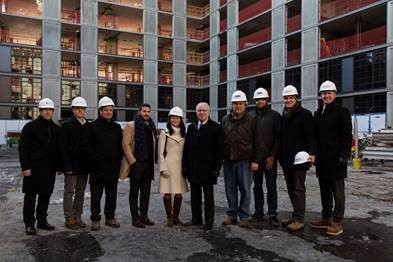 Designed by GKV Architects, 428-unit building is located at 30-02 39th Ave. close to the N and W trains with quick access to Midtown Manhattan, and within walking distance to some of Long Island City’s top retail and dining destinations. Leasing operations at ARC are anticipated to begin this summer, with a grand opening scheduled for fall 2017, according to the developer.

The 10-story rental building offers a combination of studios and one-bedroom and two-bedroom luxury apartments, all of which will feature expansive casement style windows, custom cabinets and quartz stone countertops. The list of residential amenities also includes a rooftop pool and sundeck, bike storage space, a fitness center and yoga studio, a basketball court, residential lounges and club rooms, and entertainment room, game rooms, a garden courtyard with a greenhouse, a golf simulator, as well as an underground parking garage for 214 vehicles. The building’s ground floor will feature 3,181 square feet of retail space.