1000 Avenue at Port Imperial, a condo building on the Hudson River waterfront in Weehawken, N.J., has opened. 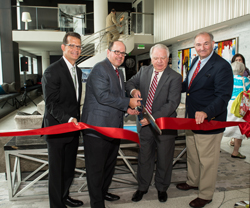 Weehawken, N.J.—1000 Avenue at Port Imperial, a condo building on the Hudson River waterfront in Weehawken, N.J., has opened. The new construction, 74-unit building, which is developed by Lennar, is the first of five planned for the Manhattan-facing property, collectively called The Avenue Collection, which is within the Port Imperial master planned property.

Designed by Manhattan-based architect Handel Architects, 1000 Avenue at Port Imperial has an all-glass façade with metal panel accents. It includes two- and three-bedroom residences ranging from 1,472 square feet to 2,188 square feet. The units are currently priced from $1.1 million to $2 million, with initial occupancy slated for later this month.

The master-planned Port Imperial stretches along two miles of Hudson River waterfront across three municipalities. It offers a waterfront promenade with shops, restaurants, parks and an intermodal transportation system anchored by the Port Imperial Ferry terminal, which goes to Midtown and Downtown Manhattan.