Lennar and Resmark to Develop 196-Unit Mixed Use Community 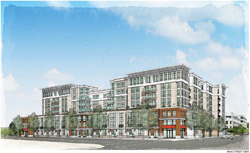 “Redwood City’s strategic location between San Francisco and the Silicon Valley makes it an extremely important market for young professionals who commute into job centers,” Ziv Cohen, chief operating officer, Resmark Apartment Living, tells MHN. “In addition, the substantial infrastructure investment spearheaded by the city is creating ample social and entertainment options, which makes Redwood City more desirable. With Lennar, we have a skilled and experienced developer that’s tuned to the needs of the target residents and will ensure quality execution and delivery.”

The Redwood community, which will be eight stories, will include seven floors of apartments and 3,500 square feet of retail space on the ground floor. Units will include studios and one- and two-bedroom apartments, with an average of 901 square feet and seven different floor plans. The units will feature custom kitchens with stone counters, stainless steel appliances and stacked washers and dryers. Additionally, the apartments will be pre-wired for broadband Internet.

Amenities will include a barbecue and dining area, a pool and spa, a fitness center and a lounge area with a gourmet kitchen for private parties or resident events. Additionally, there will be storage space for approximately 100 bicycles.

Construction for the community is expected to begin in the first quarter of 2014 and be completed in early 2016.