With employment steadily improving in a job market that had been in dire need of improvement in recent years, and occupancy rates and rents experiencing sustainable growth, Las Vegas is poised for a better year in terms of its apartment market by the end of 2014.

Las Vegas—With employment steadily improving in a job market that had been in dire need of improvement in recent years, and occupancy rates and rents experiencing sustainable growth, Las Vegas is poised for a better year in terms of its apartment market by the end of 2014. Data provided by Marcus & Millichap Real Estate Investment Services highlights the current market improvement seen in Sin City in both the residential and hospitality sectors, after a number of difficult years. 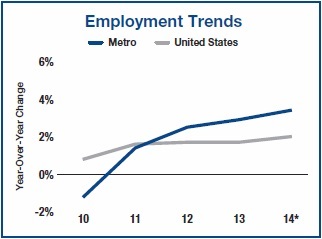 In 2014, the city will see the addition of approximately 29,600 jobs, as the city’s hospitality core keep creating jobs with the addition of major properties to its roster. Set for an estimated 3.4 percent increase in employment, metro Las Vegas is currently outpacing the national average in terms of job creation. Compared to the past 12 months, the city saw a rise in payroll of 24,500 new jobs during the similar time period, or 2.9 percent.

Trade, transportation and utilities had the strongest growth over the past year, adding 8,800 jobs, while the leisure and hospitality sector followed suite with 8,100 new jobs. Other sectors are slowly becoming more visible as a result of sustained efforts for diversification—the best example being the relocation of Zappos to a new, larger HQ in the city’s downtown. The ongoing conversation of bringing a brand new sports franchise to the city, with most reports pointing towards an MLS team, would also contribute to the area’s improving economy.

In terms of construction, the city saw 510 apartments added to the housing stock over the last year, a far cry from the 1,200 units that were completed during the previous 12 months. The past year has seen only two high profile completions, with the 296 units of the Edge at Traverse Point bolstering the existing housing stock. The importance of the apartment community was recently highlighted as a joint venture between The Bascom Group and funds managed by Oaktree Capital Management LP recently moved to acquire the property. Four apartment properties including the 320-unit Chandler Apartment Homes are set to contribute to the city’s apartment stock. 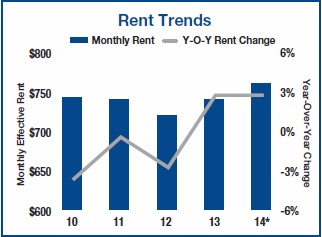 In terms of rents, data shows that monthly rents have recently hit the $740 per month mark on average, meaning a 1.8 percent hike with submarkets such as Sunrise Manor/Northeast, Summerlin/The Lakes and Central Las Vegas achieving better results than expected. Marcus & Millichap’s prediction for the end of 2014 is that rates will stand at around $761, essentially a 2.8 percent rise just like in 2013, noting a two-year plateau in rent growth. Apartment vacancy rates went up by 70 basis points during Q1 of the year, but accelerating job growth and restrained development will drive the rate lower, towards a 6.6 percent average value. 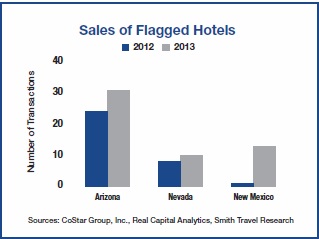 The hospitality sector is also seeing an uptick in activity, as the Hospitality Research Market Update for the Southwest Region by Marcus & Millichap. According to the report, by the end of Q1, the Southwest area, meaning Arizona, Nevada and New Mexico, went up 380 basis points to 65.1 percent as business and leisure flowed in from other parts of the country. Nevada is leading the area in terms of statewide occupancy, full-year RevPAR trends and sales of flagged hotels, as the appeal of Las Vegas and Reno seems to continue to go strong. The city’s leisure volume drove the state to an 8.4 percent gain, meaning that Las Vegas had one of the best showings in the entire country.

In terms of room revenue, Nevada once again led the way, with a hike of around 16.5 percent for Q1 of 2014. The state also drove the Southwest area, where room revenues went up by around 12 percent. In terms of hotel sales, Nevada saw far fewer properties trade hands than Arizona in 2012, while the overall transaction volume went up last year in all of the states in the Southwest region for 2013. Most of the properties involved in deals were part of the Downtown Project created by Zappos CEO Tony Hsieh.