MWest Holdings acquired the 168-unit luxury asset from CIM Group, which had owned it for more than five years, shortly after it underwent a $25.5 million redevelopment. 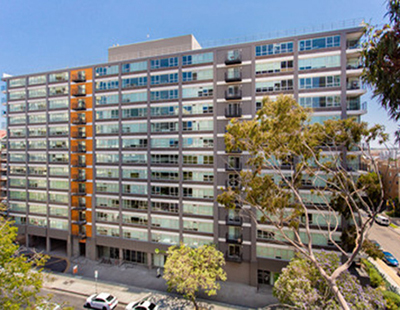 MWest Holdings has acquired The View, a 168-unit, 13-story luxury apartment community in the Koreatown district of Los Angeles, from CIM Group.

“The View is an example of a unique core-plus purchase where we can make thoughtful upgrades to an already desirable asset in a growing community, with the goal of ensuring an enjoyable living environment both new and existing residents will enjoy,” Karl Slovin, MWest Holdings president, said in a prepared statement.

The property has studio, one- and two-bedroom units in a variety of floorplans. Rents range from about $1,955 to $3,556 with an average rent of $2,532, according to Yardi Matrix data. Marcus & Millichap reported average rents in Los Angeles increased 5.2 percent year over year for the second quarter of 2018.

It is located one block from the Wilshire/Normandie subway station and the Wilshire/Vermont station is less than a mile away. With a walk score of 96, residents have easy access to restaurants, entertainment and nightlife.

The Koreatown submarket is gentrifying and experiencing a development boom. The Pearl on Wilshire at 687 S. Hobart Blvd., a 346-unit property developed by Cityview, was the second highest number of units delivered in Los Angeles during the second quarter, according to Kidder Mathews Second Quarter 2018 Los Angeles Multifamily Real Estate Market Review.

MWest Holdings has been active in recent months in the Los Angeles multifamily market. In May, the Los Angeles-based real estate and investment firm purchased Sunset Gardens, a 42-unit townhome community in Canoga Park, Calif., for nearly $12 million. The firm rebranded the asset as NoVa Townhomes. The three-story building has one-, two- and three-bedroom apartments. In April, MWest Holdings, together with GreenOak Real Estate, acquired the 132-unit Santa Fe Lofts in the Gallery Row District of Downtown Los Angeles.

Meanwhile, CIM Group began construction last month on the final phase of a mixed-use development on a 2.6-acre property that formerly housed several auto dealerships on Santa Monica Boulevard in Los Angeles. The five-story building at 1500 Granville Ave. will have 154 apartments and 16,600 square feet of retail. Phase one, completed in 2017, included three four-story buildings with 37 units. A four-story building with 147 units was included in phase two along with a Target and Healthy Spot pet store. Those assets are still under construction and scheduled for completion early next year.