The development will feature 371 luxury apartment homes and a 1.1-acre park. 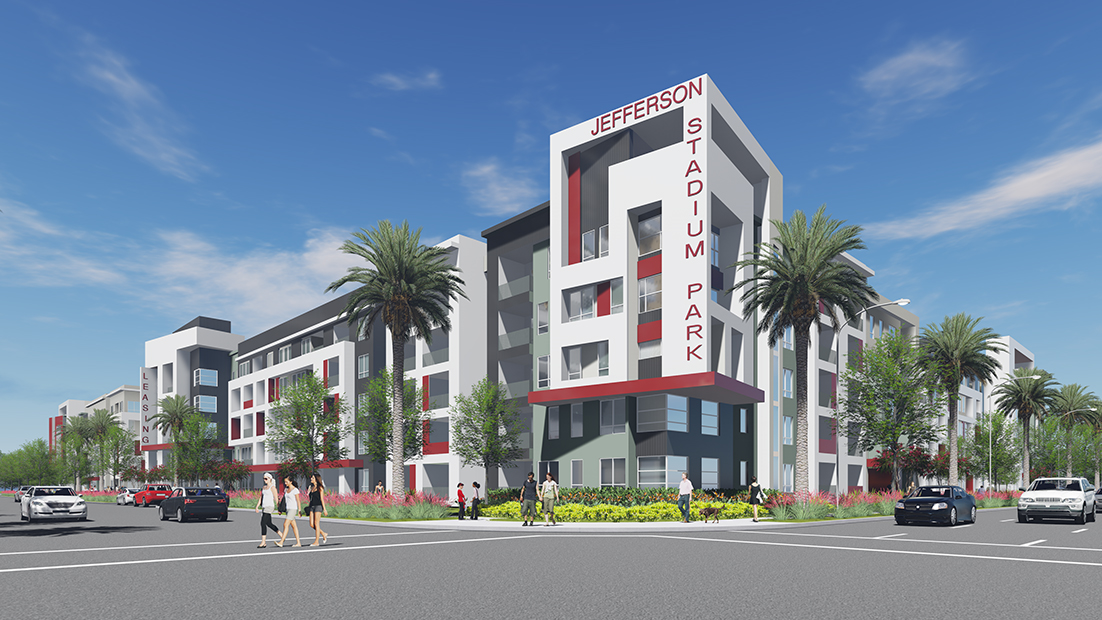 Anaheim, Calif.—JPI has closed construction financing for Phase I of Jefferson Stadium Park, located on a 17.6-acre parcel in Anaheim’s Platinum Triangle. The development will feature 371 luxury apartment homes and a 1.1-acre park.

The three-phase development is located directly adjacent to Angel Stadium of Anaheim and will eventually provide 1,079 luxury apartments, among them a dozen live-work units. Also included will be 14,600 square feet of community-oriented retail space.

Construction financing for Jefferson Stadium Park is being provided by publicly owned East West Bancorp, with assets above $34 billion. Preferred Bank is also a lending participant.

Following the Anaheim City Council’s project approval in June 2016, JPI announced it had partnered with Grand China Fund in a $255 million joint venture to develop Phases I and II.

“In 2013, JPI began due diligence for potential development opportunities in Anaheim’s Platinum Triangle,” JPI Western Region senior vice president and managing development partner Todd Bowden told MHN. “The location was attractive to JPI because of the city of Anaheim’s commitment to create a center-city core, or the ‘new downtown’ for Orange County. The city has a unique master plan in place to encourage development that creates a 24-hour living environment. Also, the entitlement process is relatively streamlined, for California . . . Some development had occurred during the prior real estate cycle but there was still opportunity to shape the overall vision of the Platinum Triangle and create the next generation of multi-family communities.”

“Jefferson Stadium Park represents the ideals that we originally envisioned for Anaheim’s Platinum Triangle,” said Anaheim Mayor Tom Tait. “This area will be transformed with the dynamic new community this project will create.”

“Penciling out the Stadium Park development involved a combination of our experience with the overall market and the understanding that we had a unique challenge of designing a three-phase master plan in which we would be building both Phase I and Phase II at virtually the same time,” Bowden said.

“It was important that we, and our design team, understood the market demographics in order to present creative architectural solutions and amenity packages that would differentiate each phase of the project, while providing activation of key boulevards, and connectivity within the master plan as well as with the larger community.”