The property’s value doubled since it last traded two years ago. 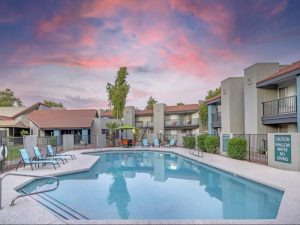 Investors Capital Group has sold the 184-unit Cantala in Glendale, Ariz., one of the hottest areas in the Greater Phoenix area. Western Wealth Capital paid $51.6 million for the nine-building, garden-style community. Marcus & Millichap division IPA worked on behalf of the seller and also procured the buyer.

Built in 1986, the property includes a mix of one- and two-bedroom floorplans—ranging from 570 square feet to 900 square feet—with open living areas and balconies or patios. Community amenities include a pool, a spa, a fitness center, a clubhouse and 284 parking spaces. Covered parking is also available.

There are more than 230,000 employees across 8,500 businesses within a 7-mile radius of the property, with several aerospace, finance, health-care and IT companies providing jobs and activity in the area, according to Cliff David, executive managing director with IPA. David, along with Executive Managing Director Steve Gebing, were part of the IPA team that brokered the sale.

Yardi Matrix shows that Cantala last traded in 2019, when Investors Capital Group purchased it for $24.5 million or $133,152 per unit.