What makes Carnegie Park the most-sold Manhattan building so far this year. 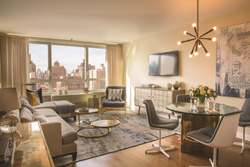 New York—Fewer than 60 days after the tower’s 100th sale, Related Companies’ Carnegie Park has reached the half-sold milestone. That makes it Manhattan’s top-selling building in terms of units sold in the first half of this year.

With an address at 200 East 94th Street, the 297-residence Carnegie Park is one of the few full-service high-rise condominiums in the elegant Upper East Side residential neighborhood known as Carnegie Hill. Stylish and sophisticated, the 31-story building provides panoramic city and river perspectives, as well as a re-imagined lobby and amenities suite conceived by Robert A.M. Stern Architects. Carnegie Park offers residences ranging from studios to five-bedroom homes.

“With ultra luxury condominiums setting record prices all over the city, there is a large market segment whose needs have not been addressed,” Sherry Tobak, senior vice president of Related Sales, told MHN. “Carnegie Park offers buyers the opportunity to live the same luxurious lifestyle at accessible pricing, without sacrificing first class services and amenities.”

A state-of-the-art fitness and yoga center is found on the lower level, while the tower‘s roof features a landscaped terrace equipped with barbecue grill and seating and showcasing dynamic panoramas of Central Park, the East River and legendary Midtown skyline. A 24-hour-attended lobby and concierge round out the extras.

“The entire suite of amenities, re-imagined by Robert A.M. Stern, has been a remarkable draw,” Tobak said. “From our stunning 50-foot pool, imaginative children’s playroom and half-acre private park to our magnificent resident’s lounge and fully-equipped gym and yoga studio, there are ample amenities to appeal to all buyers.”

Also nearby are Whole Foods, gourmet markets, some of Manhattan’s best schools and recreational venues ranging from Central Park and Carl Schurz Park to Asphalt Green and the East River Esplanade.

“The Upper East Side has long had the reputation of being the most sophisticated neighborhood in Manhattan, with the best cultural institutions, the finest schools and the most expensive real estate,” Tobak said. “Carnegie Park Condominium gives purchasers who do not wish to spend UES prices the chance to live in this historic neighborhood.”