How to Create a Well-Themed Apartment Asset

Most developers are driven by financials, not design. They know how to close the deal, but don’t have the capacity to set the theme that will drive occupancy.

By Gary A. Haygood, RLA, ASLA, principal, The Haygood Group

Ever been to a multifamily community that you really liked? Have you stopped to think about why you liked it? It likely had to do with theming. Theming is critically important to making a project successful. The key is to set the theme from the beginning and carry that through all aspects of the project from the name and logo to the physical appearance of the project, to marketing collateral and even the leasing documents.

Now, consistent theming for an entire property is a tall order. Most developers are driven by financials, not design. They often don’t have the capacity to set the theme — which is fine, because they know how to close a deal. But some developers have a knack for both. An asset can truly shine under the right leadership from a developer,  landscape architect, branding company and architect.

We had the pleasure to provide landscape architectural services for Ohio-based developer Zaremba Group for Fusion 1560 in St. Petersburg, Fla. Humphreys and Partners designed the award-winning community. The leadership team at Zaremba (Nicholas Husak and Ashley Combs) both had a great appreciation for design. Combs in fact is an interior designer by training and set the tone for the project. As the community’s name suggests, the project was to meld design styles ranging from urban, industrial, contemporary, quirky, edgy and somewhat sassy. The tagline for the project was “Expect the Unexpected.” 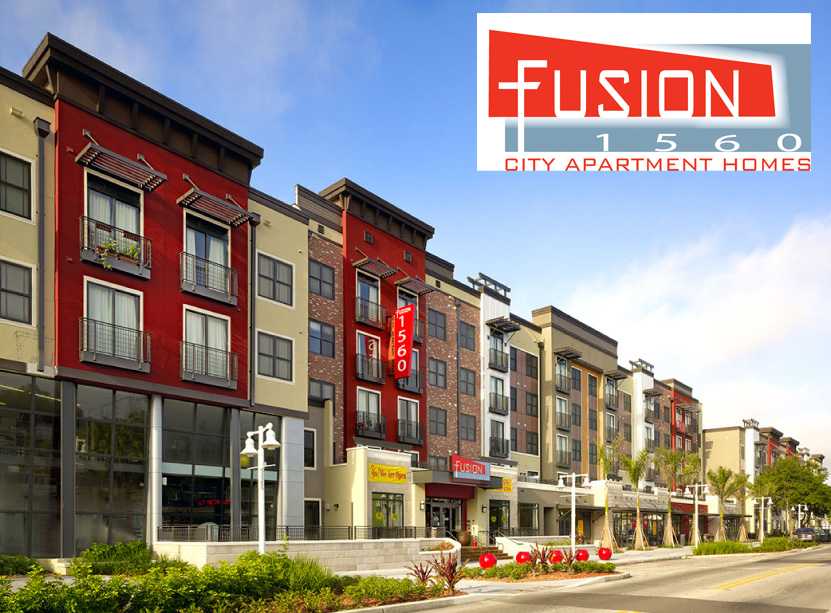 For a successful theming, all the pieces of the development need to add to the brand of the community. The goal is to deliver a single, integrated theme. This requires close coordination between the ownership, architect, interior designer, landscape architect and branding professionals and leasing representatives. Let’s take a closer look at how this played out at Fusion 1560. 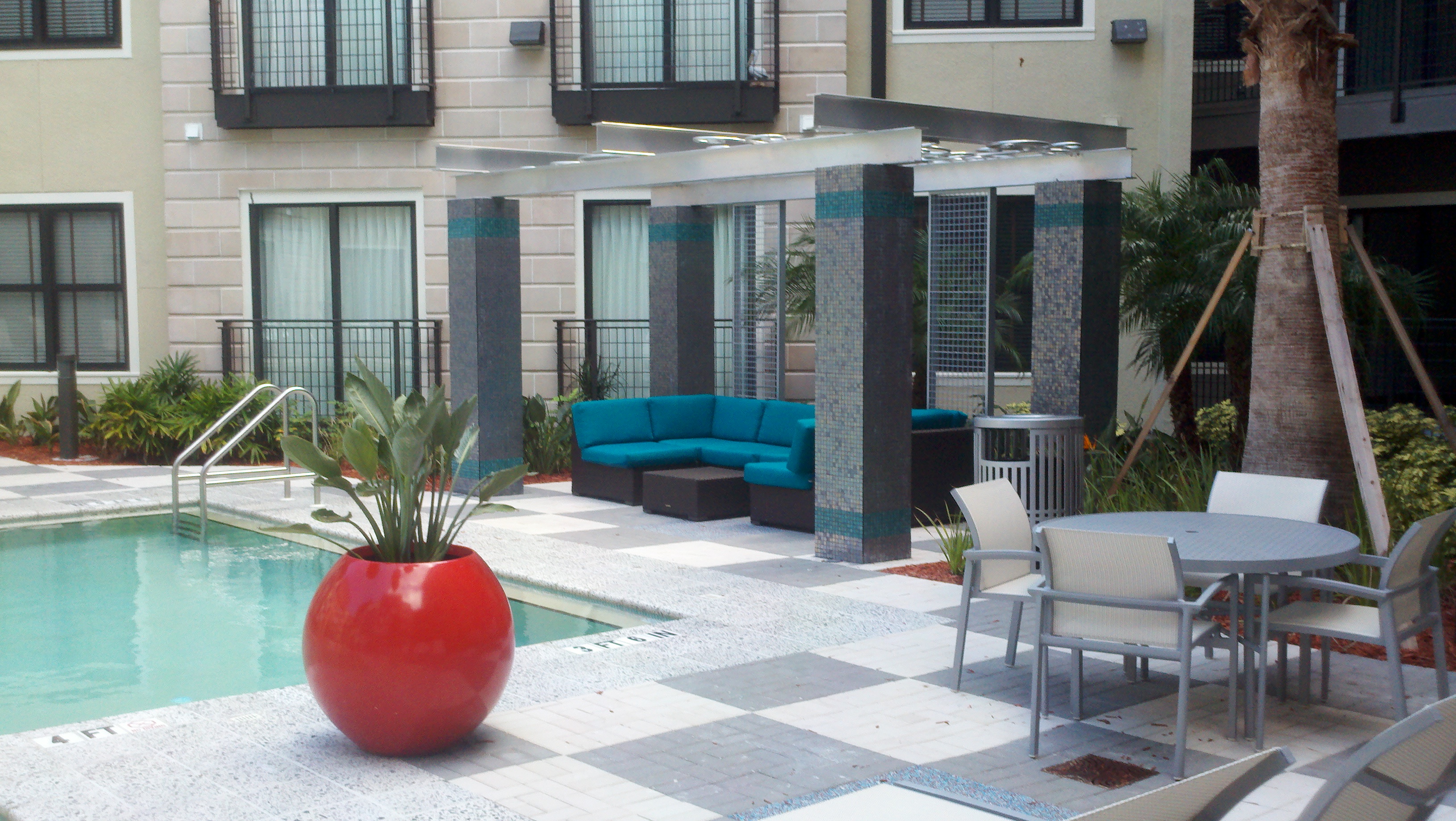 Because of the industrial flavor of the theme, we used steel I-beams for the trellises. These tie in with the architectural elements on the building and are used throughout the various amenity areas as well as throughout the project as a whole. 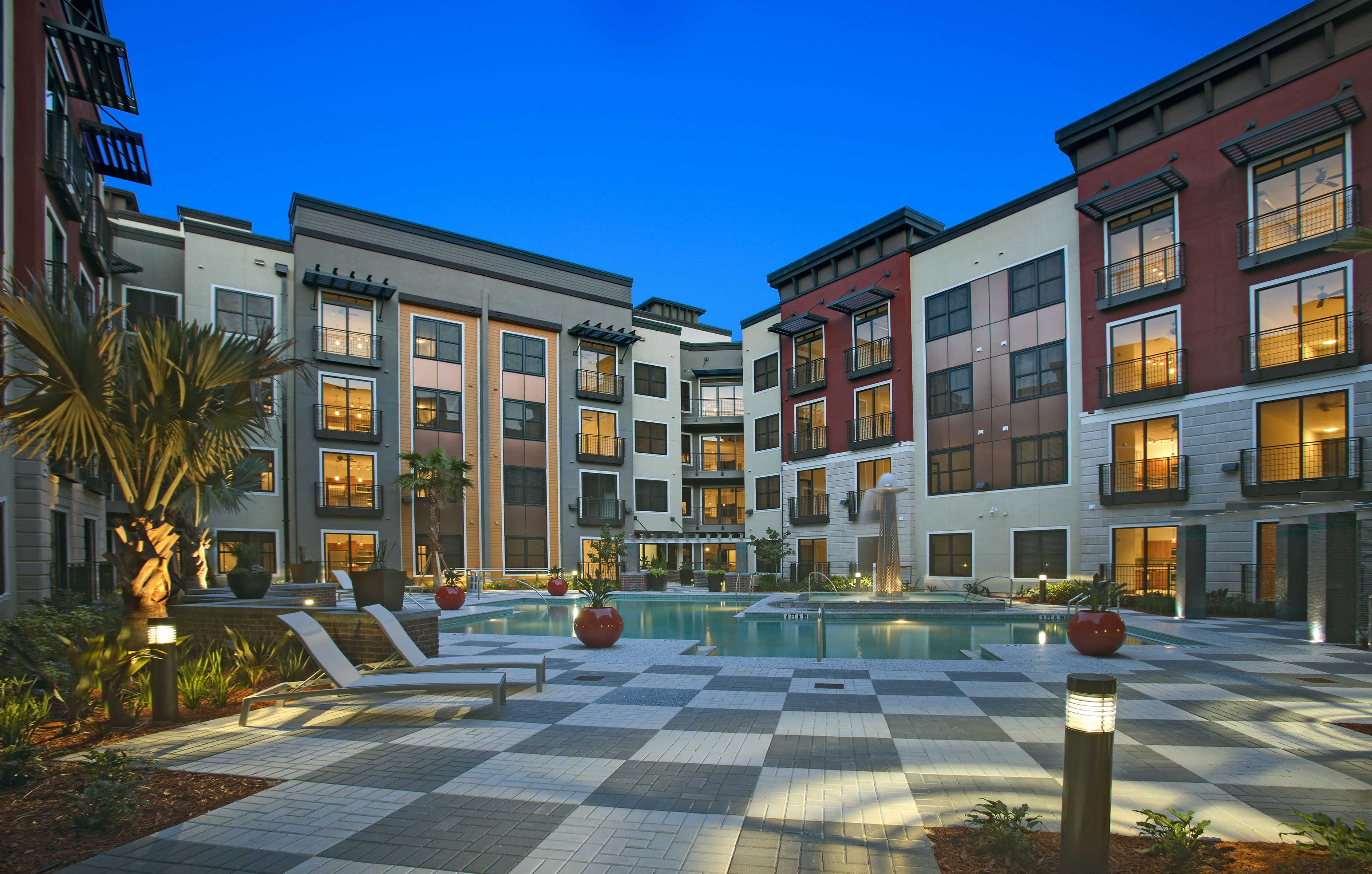 The pool was designed on a diagonal because it’s quirky. It was more interesting than having a pool in a relatively small courtyard that is just parallel to the building. The layout also lets swimmers to have two 50’ lengths to swim. We also designed an internally lit, pierced aluminum tower that sets within the spa with water overflowing from the bowl on top. This is the focal feature for the pool area. 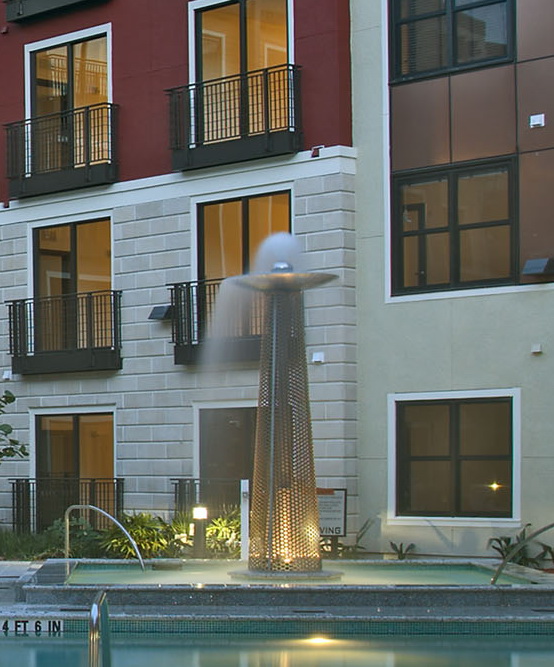 The pool deck was laid out to be exciting and somewhat chaotic, working again to create this desirable fusion character.

The other ground level courtyard was a particular challenge due to an existing canal 30’ below grade that had to be maintained. Structural walls were built up to the courtyard level. Aside from furniture, nothing substantial could be placed on the structural desk. So we created a wall a few feet behind the structural wall below that was at a peculiar angle horizontally. In addition to that, we sloped the wall so it was also at an engaging angle vertically. Steep berms were added behind the wall. A fog system was also incorporated to create mist under the aluminum butterfly statement pieces. 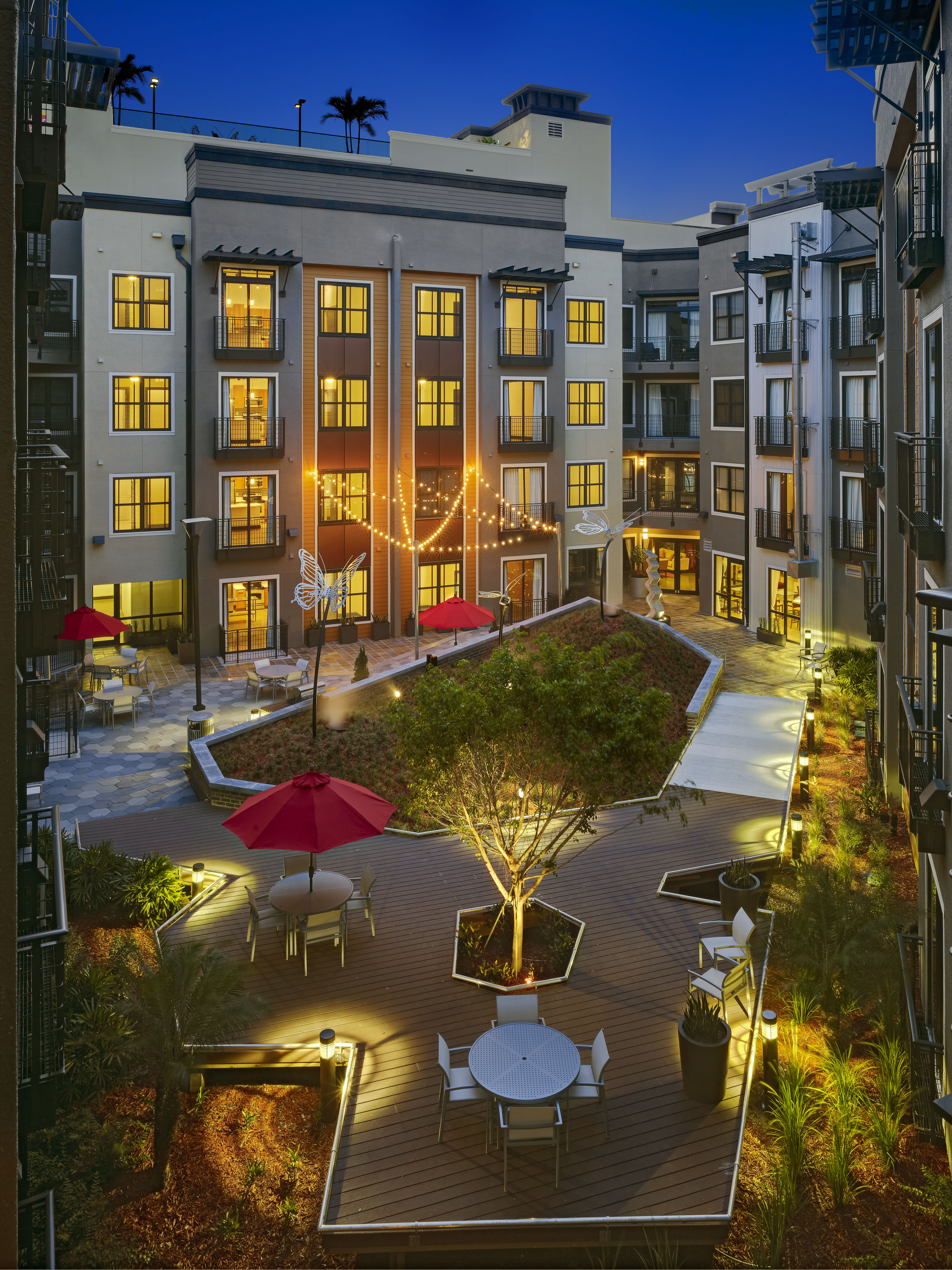 We also incorporated numerous industrial, urban materials in the design along with other sculptures, string lights, table and chair sets, and planters within the courtyard to create an interesting, relaxing courtyard for the residents to enjoy. 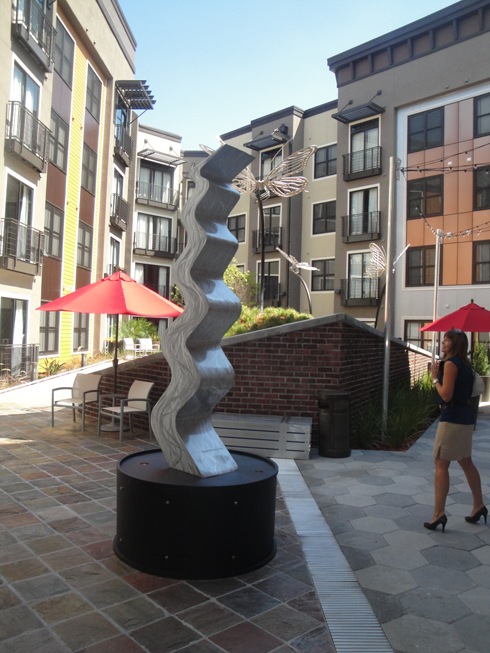 The rooftop deck offers incredible views to downtown St. Petersburg. It was designed for sunbathing during the day and small or large get-togethers at dusk. The striped tile pattern sets the space up to be a little unusual. 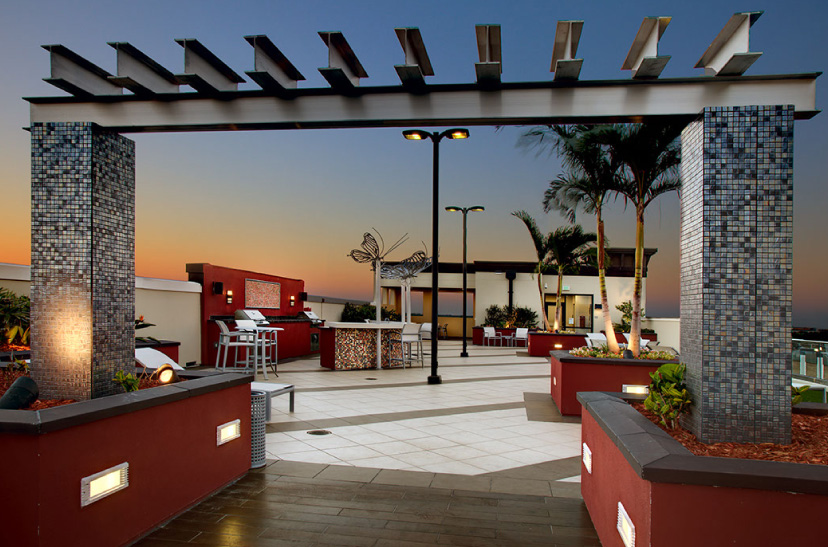 The tiles on the wall behind the outdoor kitchen were chosen for their edgy and contemporary style. Interior designs chose to use these same tiles in the restrooms to keep project theming consistent.

The outdoor kitchen bar has a custom made colored concrete countertop with mother-of-pearl and recycled glass of various colors in it. My favorite part though is the fiber-optic lighting woven throughout the countertop that twinkles at night! 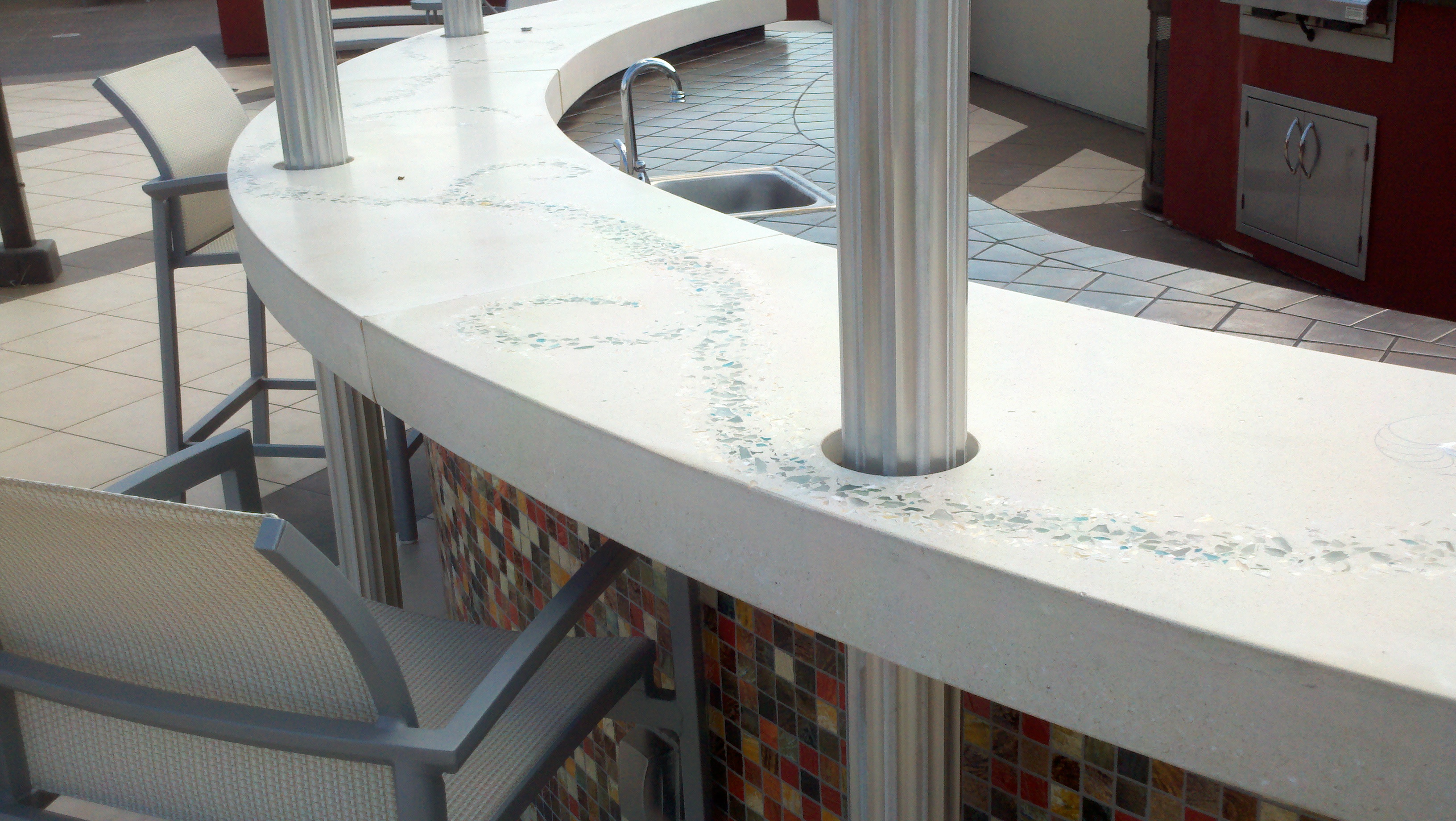 Gary A. Haygood, RLA, ASLA, is the principal landscape architect/land planner with The Haygood Group LLC. With 27 years of multi-family, resort, community planning and amenity design experience in Hilton Head Island, S.C.; Tampa, Fla.; and Ridgeland, Miss., Haygood brings a wealth of knowledge and experience from various places to their multifamily clients.