After key election wins, proponents will pursue more regulation in 2023 and beyond.

Despite staunch opposition from the multifamily industry, rent control is unquestionably gaining traction. In 2022, rent regulation emerged a clear winner in municipalities around the country. The apartment sector faces an intensified challenge of articulating the case against rent control as the answer to the nation’s housing crisis. 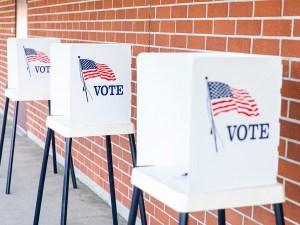 Photo of voting booths by AdamKaz/iStockphoto.com

These regulations are cropping up in two main varieties: caps on increases and fees imposed on owners who keep their units empty, according to Emerging Trends. That has a trickle-down effect on individual property owners, the report notes.

Proponents continue to argue that rent control measures are necessary to keep pricing within reach and to provide access to housing for residents who work near high-cost residential areas. Critics respond that rent control hurts the entire housing market for multiple reasons.

“Rent control continues to come up literally every year—and of course IREM is against it because we think it is harmful to building tenants in the housing industry,” said Chip Watts, president of Birmingham, Ala.-based Watts Realty Co. and 2021 president of the Institute of Real Estate Management.

IREM cites a survey by the American Economic Association in which 93 percent of participating economists agreed that rent control reduces the quality and quantity of available housing.

“Property managers like me are faced with decreasing revenues and may be forced to reduce the amount that they actually invest in maintaining and repairing an existing property,” said Watts. “So we may not take it to the higher end. We may leave the finishes from the previous tenant for the next tenant that comes in.”

Because rent control reduces property tax revenues, critics say, the measures also reduce the market value of a controlled rental property, both in absolute terms and relative to the increase in values in unregulated markets. That has significant implications, Watts said, because taxable assessed rental property values decline relative to those of unregulated properties.

Rent regulations can make the affected areas less attractive for development and investment, as well. “When you see these policies pop up or these changes in places like Pasadena or Santa Monica, you’re almost taking some of those markets completely off the map,” said Jim Lapides, vice president of advocacy and strategic communications at NMHC. Among the states on the industry’s watch list are California, New York, Pennsylvania, Washington, Oregon, Illinois and Florida for rent control measures.

Among the statewide and local measures on the November 2022 ballot were several that indicate voter support for rent control as a way to produce affordable housing. In a telling summary, Enterprise identified several key results:

Eviction legislation gained steam in 2022 and rent control legislation was introduced in 19 state legislatures. “Very few of those actually moved forward, but it goes to show the scope and breadth of it—from California, where you would expect it, to places like Kentucky and South Carolina where it’s never going to move forward,” said Lapides. “I think it’s notable that you’re seeing rent control pop up in those [unlikely] places as well.”

Among the consequential measures on the November ballot was one approved by voters in Portland, Maine. It limits the annual rent increases to 70 percent of the increase in the consumer price index. It also includes a 90-day notice for annual lease termination, limits security deposits to an amount equivalent to one month’s rent. Also prohibited: fees for applications, credit reports and background checks.

“That limits the property manager’s ability to actually operate,” said Watts. “My ancillary fees help me keep my business going. My ancillary fees are applications, credit reports and background checks. If I’m charging $75 for me to do all that, I’m paying for my staff to do that, plus I’m paying a third-party service to complete the reports for me.”

In some municipalities, rent regulation remains on the radar despite recent setbacks. Columbus, Ohio, tried to use a loophole to pursue a ballot initiative until the state legislature shut the door. A culinary union collected signatures for a ballot initiative in North Las Vegas union, but the proposal was invalidated due to technical reasons. (Resources to track federal and state advocacy priorities include an interactive tool offered by the National Apartment Association and its affiliates.)

Not all November election results will necessarily strengthen the rent control push. Such is likely to be the case with Nevada’s election of a Republican governor, Lapides predicts. “It doesn’t mean you won’t see a tremendous legislative effort there “and also another push for a ballot initiative, but I think that [win] was a bit of a surprise at least related to rent control.”

In California, a longtime leader in rent control, at least one investor thinks it might be a blessing in disguise.

“Rent regulation and the COVID moratoria helped keep rents from soaring out of control in California in recent years. This has forced cap rates down to unprecedented levels in the trendier markets,” said Edward Ring, founder & CEO of New Standard Equities, whose portfolio is in Greater Seattle, Northern California and Southern California.

“It may help the state stabilize through the next recession and a faster pace given the nature of tech employment and a persistent lack of housing supply. California doesn’t have that far to fall and recovery won’t take long,” says Ring.

In his view, if cap rates compressed by 250 basis points in the Sun Belt, reverting to the mean in those markets may cause pain for those who bought at peak pricing. California investors who bought similar product—but at a cap rate that compressed by 100 basis points, as the evidence suggests—may be rewarded for their investment in the Golden State, especially as wages are higher than average in California and supply tends to be constrained.

“California’s rent control measures have actually prevented landlords from getting too out of (step) with the fundamentals of what the population can actually afford to rent,” said Ring. “That’s not to say that we don’t have an affordability crisis here in California. I think we do.”

But, despite these potential benefits, Ring warns that poorly written laws can create adverse consequences, especially in jurisdictions that are implementing new laws or make their laws too strict. “Rent control may be an entirely new beast for investors and sponsors in overheated markets that are now trying to rein it in,” says Ring. “Operators in Boise or Nashville who have never dealt with rent control may struggle to work under these constraints.”

Watts predicts that it’s going to take several years to figure out that these rent control measures aren’t really working. In the meantime, they’re forcing investors to vacate an area or municipality in which they previously were investing in, because they can’t get a return on their investments.

“They can’t push rental rates as the market would normally allow. We’re in an economy that is based on capitalism,” says Watts. “If you limit your price increases or the ability to generate a price, then people are going to find someplace else where they can generate income.”