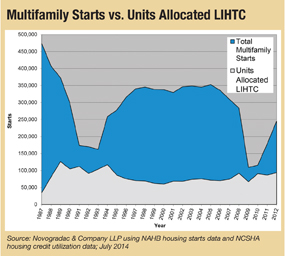 Ethan Handelman, vice president for policy and advocacy at the National Housing conference, agrees that LIHTC production falls short of the levels that are required. “This is not a failure of the program, but of federal investment,” he says. “LIHTC is doing an amazing job. It is the best production program we’ve ever had.” But the government has not “invested enough to meet all the housing needs that are out there,” Handelman acknowledges.

If anything, the power of LIHTC to produce or preserve affordable housing has become more challenged of late. Higher construction and land costs in a development upcycle, substantial cuts in soft financing in the past few years, and a per capita allocation that may not be keeping up with inflation are all said to be factors that are eroding the power of the LIHTC to produce affordable housing.

LIHTC production has for the most part hovered near 100,000 units per year since the program’s commencement in 1987. Numbers provided by Novogradac & Company LLP using data from the National Association of Home Builders and the National Council of State Housing Agencies (NCSHA) show that in early days of the program, there were a few years when units allocated LIHTCs (new construction and rehab) reached above 100,000 units. After 1995, units allocated LIHTCs annually have ranged at levels below 100,000 units. Allocations took a dip during the last recession, to a post-1987 low of 66,991 units in 2009, before climbing up again, according to data from Novogradac. [See chart.]

These LIHTC production volumes may be far from sufficient to address the nation’s affordability crisis. According to the industry-sponsored State of the Nation’s Housing 2014 report, authored by the Joint Center for Housing Studies (JCHS), renter growth averaged 400,000 annually in the past few decades. Nearly half of all renters were cost-burdened in 2012, meaning they pay more than 30 percent of their incomes in rent. As far as the extremely low-income households, there were only 3.3 million rental units affordable and available for 11.5 million of such households in 2012, according to the JCHS study. Affordable Rental Housing A.C.T.I.O.N. points out this means “an astonishing unmet need of 8.2 million affordable homes,” for the extremely low-income renters alone. And, as far as rental subsidies, just under a quarter of households eligible for rental subsidies receive them in 2011, reports JCHS.

In the immediate term, LIHTC allocation levels could dip in 2014 compared to levels in 2013 and ’12, indicates James Tassos, senior legislative and policy associate at NCSHA. The total units allocated LIHTCs in 2012, the latest year for which figures are available, was 98,000 units under the 9 percent (60,000 units) and 4 percent (38,000 units) LIHTC programs, according to NCSHA. The decline in allocation that may occur this year is in part a result of the expiration at the end of ’13 of the flat 9 percent tax credits, says Tassos.

Although the program was called the “9 percent credit,” the housing tax credits were historically awarded for projects at a floating rate of less than 9 percent (of eligible project costs). In the wake of the Great Recession, Congress passed legislation to fix that tax credit rate at no less than 9 percent. The expiration of this 9 percent floor is estimated to start affecting allocations in ’12 and potentially reduce equity investments by 15 to 20 percent. The rate for the 9 percent credit currently stands at about 7.5 percent.

For developer Matthew Rieger, president and CEO of the Housing Trust Group, the constricted supply of LIHTCs available for distribution to projects is one of the biggest constraints to producing more LIHTC housing. “There is a limited supply of 9 percent tax credits at the state level and an over abundance of [LIHTC] requests,” says Rieger. The 4 percent LIHTC is plentiful, says Rieger, but it provides less equity per project. Consequently, more soft financing is needed to meet the bigger gap in financing that results under that program, he adds. Rieger says that in Miami-Dade and Broward counties in South Florida, the amount of housing tax credits available for distribution is never enough to meet the demand for housing, though he acknowledges that in the rest of Florida, the amount of LIHTCs needed is submarket-dependent.

The amount of annual housing tax credits awarded is about $10 billion per year, explains Steven Kropf, president and CEO of Raymond James Tax Credit Funds. The greatest impediments to more LIHTC housing being produced “include the absolute cap in annual credits that are available,” agrees Kropf.

Next to limited amount of LIHTCs provided by the Treasury, the second biggest barrier to greater LIHTC housing production, says Rieger, is the increasingly limited supply of developable land. In the past, it has been “relatively easy to find good sites” for LIHTC development. But “as the real estate market has improved the past two years, we are competing with a lot of market-rate developers, which is driving up land prices.” Rieger says more sites are available further from the urban cores, but the lack of public transportation in those locations poses a problem for residents whose jobs are in the urban centers. “Transit options, and mass transit in particular, is not keeping up with the population explosion in South Florida,” says Rieger.

Costs have also increased. Land prices have increased by as much as 20 to 50 percent, particularly in certain very specific areas, estimates Rieger. Market-rate developments can always charge higher rents to make up for the higher land costs, but LIHTC developers are limited by HUD guidelines in the rents they can charge. And there are also anecdotal testimonials that construction costs are rising as developers compete for contractors in the hot markets.

Indeed, not only has inflation since 1986 eroded the allocation, but the annual adjustments to increase the LIHTC cap may not be sufficient, some argue. Under the LIHTC program, LIHTCs are awarded to states based on their population levels. Currently, the state allocation stands at $2.20 per capita, compared to $1.25 per capita at the LIHTC’s inception in 1986. The amount is subject to CPI adjustments for inflation every year. Nevertheless, even with the LIHTC allocation rising with population levels and the small annual inflation adjustments, the reality is that these adjustments may be insufficient in keeping pace with rising construction and land costs, says Tassos.

One of the core challenges in the past few years in the wake of the great recession is the huge shrinkage in soft financing—low-cost loans or outright grants–—whether at the federal, state or local levels, that are typically used in LIHTC development to supplement equity obtained from the sale of tax credits. At the national level, HOME funds, currently at about $1 billion, “are half what they were just a few years ago,” says Handelman. CDBG funds have declined substantially. Hope 6 funds have also seen decreases, though “not at the same scale” as for CDBG and HOME funds.

State and local governments facing fiscal issues post-recession have also had difficulty providing the same level of soft funding they did previously. But at the same time rising land prices emphasize the need for more soft money from local governments, which will allow LIHTC developers to take a reduced first mortgage and still adequately service that debt with less operating income, adds Rieger.

One positive point at least with respect to raising capital is that “in some highly competitive markets prices have been driven higher by the competition among CRA investors,” reports Kropf. “Higher credit prices mean that developers can raise more equity since the credits are selling at higher prices.” Nevertheless, he noted that “higher construction costs and the need to use more equity to finance a deal versus other debt sources can have an impact on the industry’s production levels.”

The solution to the shortfall of LIHTC in meeting affordable housing needs, at least as far as the program itself, seems to be first to dramatically increase the amount of the LIHTC allocated. The Bipartisan Policy Center (BPC), which was founded in 2007 by four former Senate majority leaders, last year recommended after a 16-month study a 50 percent expansion of the LIHTC program. Such an increase would entail raising the per capital LIHTC allocation to states by 50 percent. BPC proposed also “the provision of additional federal funding” towards soft financing. Affordable Rental Housing A.C.T.I.O.N. notes that the BPC estimates that expanding LIHTC by 50 percent would support 350,000 to 400,000 units of new affordable housing.

Kropf says that there have also been proposals to change some of the basic LIHTC rules including the lengths of the credit and compliance periods, and the required income levels. A recent accounting rule change may also encourage new investments. Ultimately, “changes in the program that would help increase absolute annual production depends on the Congress and the ability of the industry to sell the benefits of the program,” says Kropf. For the moment, Rieger says LIHTC developers would welcome fixing the housing credit floor at 9 percent. “A fixed rate of 9 percent would generate more equity for the same amount of tax credit allocation,” he says.

For the longer term, Handelman argues that barriers to LIHTC development at the state and local levels need to be addressed, such as density and parking restrictions, as well as various constraints on single-family housing sites in terms of lot sizes and set backs. Cost barriers and development costs, suggests Handelman, need to be reduced when addressing the inadequacy of affordable housing production to meet demand. He adds, “If we only chase the issue with an increase in dollars, we will lose the race.”