The developer broke ground on phase two of the $500 million mixed-use project in the city's downtown. 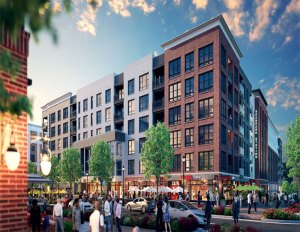 Hoffman & Associates has secured approximately $198.9 million in financing for the second phase of its $500 million Seaboard Station mixed-use development in Raleigh, N.C., and has broken ground on the project that will include two new apartment buildings with 279 units.

The second phase of the downtown Raleigh project is expected to deliver by summer 2024. It will also include about 55,000 square feet of retail space and a three-star, extended-stay, 149-key hotel that is expected to be announced later this year. At full build-out, the development will offer a walkable core with more than 1 million square feet of mixed-use space.

Construction is underway on the first phase, which will be delivered in early 2023, and features The Signal, a 298-unit apartment building, as well as restaurants and shops along a double-sided corridor with more than 18,000 square feet of outdoor seating and café terraces connecting to the neighborhood’s underground parking.

Located at 721 Halifax St., The Signal is now leasing, with move-ins expected early next year. The building will have studio, one-, two- and three-bedroom layouts and will be managed by Greystar. The units will feature open layouts with kitchen islands, quartz countertops, stainless steel appliances, wood-style flooring, tiled backsplashes, in-unit washers and dryers and smart home technology with keyless entry and balconies.

Community amenities include a fitness center, a yoga studio and private training room with Echelon Smart Mirror; an entertaining kitchen; a gaming and TV lounge; a coworking lounge; a wine lounge and a pet spa. Outdoor amenities will feature a resort-style saltwater pool and sun shelf; poolside courtyard with fire pits, dining area and grills and lounge seating with outdoor TV.

Hoffman & Associates, a Washington, D.C.,-based leader in mixed-use and residential development in the Mid-Atlantic and Southeast regions, has secured total project funding from United Bank. United Bank led the financing transactions for both the first and second phases. Financing for the first phase totaled about $300 million. In addition to United Bank, Burke & Herbert Bank, Sandy Spring Bank and Dogwood State Bank, served as syndicate partners for the second phase. Together they provided the $198.85 million of construction and development financing needed to complete the project.

John Florian, executive vice president of development for Hoffman & Associates, said in a prepared statement the groundbreaking of the second phase of Seaboard Station is a milestone achievement for the firm, its partners and the downtown Raleigh community.

Hoffman & Associates, which also has a Raleigh office, has developed more than 75 mixed-use, residential, office and retail projects. The company also has large-scale developments throughout the Washington, D.C., area including Falls Church, Va., in a portfolio totaling $6 billion. Hoffman & Associates, in a joint venture with Madison Marquette, is developing The Wharf, a $3.6 billion, 3.3 million-square-foot neighborhood along Washington, D.C.’s waterfront. The partnership, Hoffman-Madison Waterfront, last month celebrated the fifth anniversary of The Wharf’s first phase and completion of the second phase of the mixed-use complex. The development now has a total of 1,490 residential units between condominiums and rentals. Most recently, two new residential properties have opened–a 12-story, 96-unit condominium and a 12-story, 225-unit apartment building.