London-based Hinduja Group, one of the largest diversified companies in the world, in partnership with Spanish industrial company Obrascon Huarte Lain Desarrollos, has recently purchased the Old War Office building in central London. 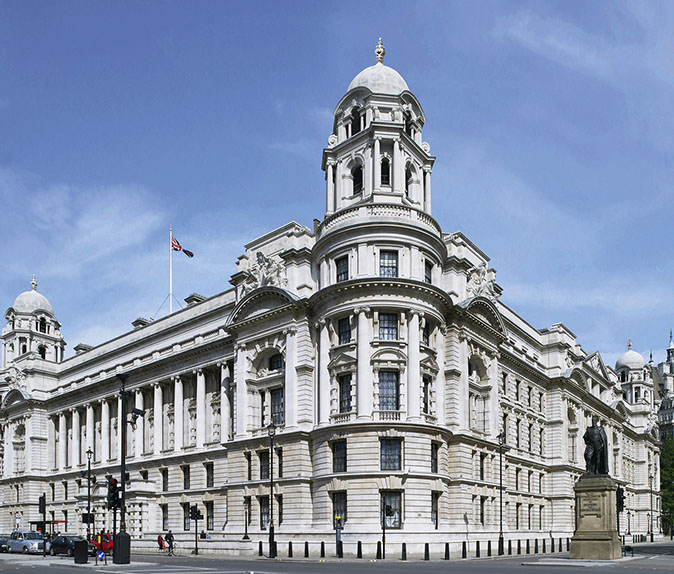 London—London-based Hinduja Group, one of the largest diversified companies in the world, in partnership with Spanish industrial company Obrascon Huarte Lain Desarrollos (OHLD), has recently purchased the Old War Office building in central London, which was once occupied by British Prime Minister Winston Churchill. The historic property was sold for an undisclosed sum.

Located at 57 Whitehall, just minutes away from Trafalgar Square, Buckingham Palace and Leicester Square, the 580,000-square-foot building was once the home of the War Office, a department of the British Government responsible for the administration of the British Army. Designed by architects William Young and Clyde Francis Young, the Edwardian Baroque-style building was completed in 1906 and features 1,000 rooms across seven floors. Four distinctive domes were used to disguise the irregular, trapezoid-shaped plot of land on which the building was erected. In 1964, the War Office’s functions were transferred to the Ministry of Defence, who continued to use the property until 2013, when it was put up for sale.

“We will make every effort to honor the heritage and restoration of this national monument, elevate its status and reconnect it with the public,” Srichand Hinduja and Gopichand Hinduja say. “We will forge a new future for the site, creating a vibrant and sustainable destination that retains and enhances the historical importance of this building.”

The Old War Office building will be restored and redeveloped into a five-star hotel and residential apartments complete with spa, fitness facility and private function rooms.  Both the Hinduja Group and OHLD have a diversified experience in the redevelopment of heritage properties, and will work with heritage and restoration experts to ensure the preservation of the landmark building. The Hinduja brothers Srichand and Gopichand recently emerged as the richest men in Britain, with a net wealth of roughly $20 billion, according to the Sunday Times.