Green Apartment Design: ‘Animated Apertures’ Blur the Divide Between Indoors and Outside

A team of Los Angeles architects hopes to make a few drastic changes to the edifices that we call apartment buildings. Strangely enough, they are starting with the windows. 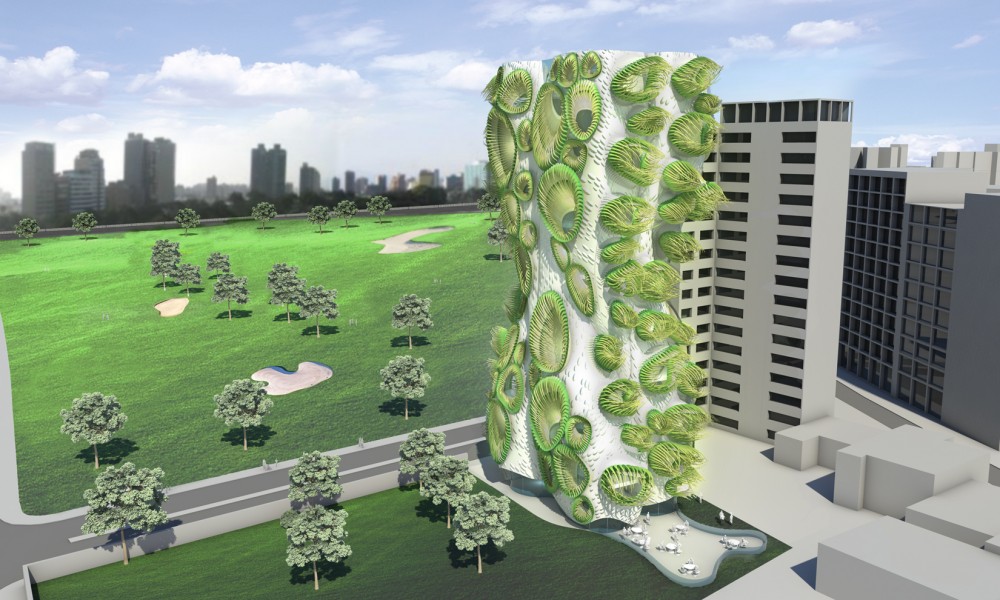 As multifamily strives to keep up with the increasingly sophisticated demands of tenants, communities have standardized a slew of amenities that would have been luxuries in past decades. The units themselves, however, remain largely unchanged: geometrically shaped boxes stacked upon one another, encapsulated in blocks of siding or stucco. A team of Los Angeles architects hopes to make a few drastic changes to the edifices that we call apartment buildings. Strangely enough, they are starting with the windows.

B+U Architects initiated the Animated Apertures Housing Tower in Lima, Peru to depict technology and nature working together in multifamily housing. Instead of adhering to the norm of traditional American architecture, the team opted to design a rental community that champions incongruence, asymmetry, and organic curves.

B+U substituted the rigid angles and smooth planes of traditional buildings with rounded edges and textured surfaces. While the building itself is undoubtedly eye-catching, the windows are the architects’ pride and joy. Designers aimed to break down a window into its most basic component, a transition between the interior and exterior of a building. B+U then created a space that blends the characteristics of a window, balcony, and plaza into one: the fiberglass apertures provide residents with a clear view to the outside while bathing the housing units in natural light. These pod-shaped openings also serve as inhabitable spaces that blur the divide between indoors and outside.

The animated apertures respond to environmental elements such as sunlight and wind. As they react, the 20-story structure seems to be in flux, like seaweed dancing in a current. “The apertures are designed for specific wind speeds so depending on the location and wind exposures the rigidity of the apertures can be adjusted accordingly,” explains Herwig Baumgartner, principal/partner at B+U. Silicon composite lashes lace the apertures. LED lights within those pliable extensions allow them to change color. The strands are finished with solar film that transforms sunlight into energy that tenants can use; these evolved windows absorb and repurpose energy like a living organism.

B+U will use the animated apertures concept in other designs, tweaking properties to make each application unique. What all projects will have in common, though, are windows that redefine interior and exterior spaces. Buildings will no longer be seen as inanimate objects. Rather, they will take on the features of adaptable organisms as man-made structures that respond to the natural environment.

“We have designed another project using a similar product—the Cruise ship terminal for Keelung,” says Baumgartner. “The apertures are suitable for a variety of uses. It is essentially a three-dimensional window frame that was developed for housing projects but can also be used for other types of buildings requiring apertures. These projects can take place anywhere in the world.”

Green energy, versatility, visual intrigue—what’s not to like? Appearance alone might limit the apertures to cities with bold skylines, such as Dubai or Copenhagen. Bakari Maxwell, Sales Counselor with Ryland Homes, holds a background in architecture and construction management. He believes that communities such as B+U’s Housing Tower may be a hard sell due to their unique aesthetics: “I think the apertures are innovative, certainly a great invention,” Maxwell explains. “But city planners and neighborhood committees often have a difficult time embracing something so extraordinary. The building, with its organic curves and unique extensions, will usually be surrounded by more traditional buildings. Some will say it stands out too much like a sore thumb…or it will be a grand monument,” he admits. “It’s a 50-50 chance.” Once loathed structures such as the Eiffle Tower and the Transamerica Pyramid are now proudly hailed as landmarks.

The packaging may not appeal to the masses but Maxwell speculates that the basic premise of the animated apertures will be well received. As the housing industry shifts towards green building, the flexible extensions provide a stylish alternative to solar panels. “People like the idea of green energy through solar power but many don’t like the look of solar panels. These extensions give solar power a more interesting form,” says Maxwell. Energy savings are yet to be determined. Baumgartner states that the application of the apertures varies from project to project. The upfront costs, time needed to see a return on investment, and required maintenance will also vary. This information will undoubtedly contribute to the apertures success.

The animated apertures are currently in concept phase, though there are interested firms seeking to bring them to reality.