What is Dodd-Frank Act’s Impact on Multifamily?

The Dodd-Frank Act puts the economy in the hands of regulators. How will it affect multifamily? 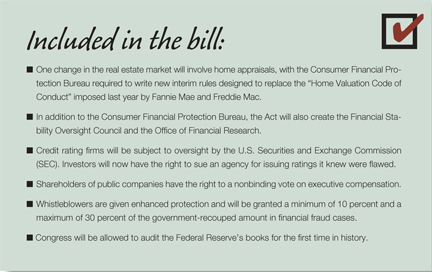 The lead-up to the 2008 financial crash was characterized by unrestrained, unregulated gambling that deepened the pockets of some Wall Street players while arguably contributing nothing of value to the broader economy. And when the house of cards collapsed, taxpayers were there to prop it back up again. Nearly two years into the “repression” (one real estate broker’s term for a combination between a recession and a depression), Washington answered with a financial reform bill, officially known as the Dodd-Frank Wall Street Reform and Consumer Protection Act, signed into law by President Obama on July 21.

The Dodd-Frank Act is being heralded by some as the biggest legislative change to the financial sector since the 1930s, creating important new federal agencies and professing to affect financial institutions and commercial companies across the board. President Obama claims the Act will categorically put an end to taxpayer-funded bailouts.

Critics, on the other hand, believe it leaves exemptions and loopholes large enough to drive an armored Treasury truck through without a scratch. Within the real estate industry, lenders and borrowers alike have expressed concerns that securitization and liquidity will be strangled by bureaucratic red tape. Certainly, it depends who you ask. The verdicts will come in slowly as aspects of the bill are incrementally implemented. 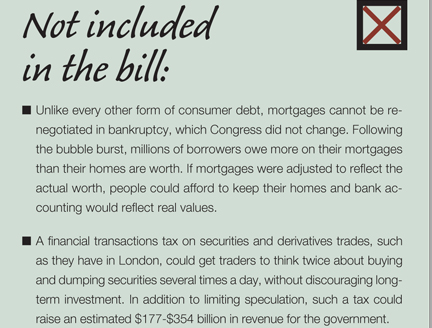 While the legislation has both positives and negatives for everyone involved, the fact that it was passed at all is a feat, considering the massive lobbying and campaign contributions pitted against reform. For example, the 38 senators who voted against the bill received an average of $103,266 in campaign contributions (compared to the average of $76,759 that those voting yes received). According to a report by Essential Information and the Consumer Education Foundation, between 1998 and 2008 the financial industry spent more than $5 billion fighting for deregulation and corporate interests, with 3,000 lobbyists circling the Hill in 2007 alone.

The reason reform was needed to begin with can be traced back to a progression of corporate chipping-away at Depression-era laws, most significantly two deregulatory measures passed at the end of Bill Clinton’s presidency: the repeal in 1999 of the Glass-Steagall Act, which had kept an important separation between investment banks and commercial banks; and the Commodity Futures Modernization Act of 2000, which stripped the derivatives market of federal regulation. Both acts helped set the financial sector on a path to destruction in the 2000s.

Reinstatement of a firewall between investment banks and commercial banks—a proposal known as the Volcker Rule, named after presidential economic advisor and former chairman of the Federal Reserve Paul Volcker—only partially came through in Dodd-Frank. Limits will be placed on banks’ ability to engage in proprietary trading, and separate operations will be required for their riskiest derivatives trading. Banks will also be required to hold additional capital to cover potential losses, and a 3 percent cap will be placed on how much core capital they can invest in hedge funds and private equity. These limits help mitigate market volatility, but they do not break up the “megabanks” like many had hoped, allowing those banks to continue speculating with taxpayer-backed deposits.

The bill takes steps toward reining in the recklessness of derivatives practices, although implementing the new rules may be easier said than done. The derivatives market is currently 100 times larger than the federal budget—five banks hold over $300 trillion in derivatives—and trading has been taking place essentially in the dark. With the new bill, over-the-counter derivatives will now be traded on a public exchange, with new clearing and exchange rules. Nonstandard derivatives will still be traded privately but will be subject to a central authority’s oversight. If regulators do their jobs, this could be a significant victory for system stabilization.

One of the new agencies created by the bill is the Consumer Financial Protection Bureau, which will eventually be housed within the Federal Reserve. Ideally, the Bureau will prevent the kind of predatory and abusive lending practices that contributed to the crash. Congressional Democrats and liberal activist groups have been rallying around Elizabeth Warren—who has earned a reputation for toughness as chair of the congressional oversight panel for TARP (Troubled Asset Relief Program)—to head the agency, although Senator Chris Dodd has implied that confirming Warren would be difficult.

Most of the provisions in the Act will become effective in stages and will require an intense period of rule-making and implementation over the next months and years. How effective they are and who will be affected will depend heavily on who is hired and how they carry out the regulations.

Dr. Sam Chandan, FRICS, global chief economist at Real Capital Analytics and adjunct professor at the Wharton School of the University of Pennsylvania, believes the bill leaves room for regulators to maneuver for a reason. “A careful review of the Act’s language will reveal that, in many cases, it is rather vague,” Chandan says. “That, in part, reflects that members of Congress are generally not subject-matter experts, in multifamily and commercial real estate—or in any other aspect of the financial market. … It was not the intent to write language that was so specific that it would limit the capacity of regulators and agencies to be flexible in terms of how … they would implement and execute the Act in a financial market that can develop and change very quickly.”

In the effort to fend off a repeat of the recent bubble, loan officers on the residential side of real estate will now be required to verify that mortgage applicants have the ability to repay the loans they seek, as well as pay the associated taxes and other costs. The benefit there is apparent enough. After all, the number of bank closures in 2010 is at 109 and counting, and bad loans are not without blame. Still, some argue that the Act creates too many hurdles for lenders.

Stuart Saft, head of the Global Real Estate Practice at the law firm Dewey & LeBoeuf, is one of these people. He refers to Title 14 of the Act, the Mortgage Reform and Anti-Predatory Lending Act, as “the anti-mortgage lending act,” asserting that it “will create a nightmare for lenders.”

Saft asks, “How are you going to securitize these loans that have so many restrictions built into them?” In his eyes, Congress should be focusing on how to get the economy functioning again instead of pushing through regulatory mechanisms. “We need to find ways to open up credit markets rather than close them down.”

Speaking about the projected effects on commercial and multifamily real estate, Chairman-elect of the Mortgage Bankers Association (MBA) Michael Berman echoed these concerns. “The number of new regulations that are going to come from this bill will be huge, and that those regulations could end up dramatically hampering the securitization market is very possible,” Berman says. “There’s no question that there could be so much red tape and so many disclosure requirements that we could end up dramatically hurting liquidity. Obviously that’s not the purpose. The purpose is to increase liquidity in a safe and sound way.”

MBA and its members worked with legislators to see that commercial and multifamily securitization was not subjected to the same levels of risk retention as single-family.

“The critical piece was to make sure that commercial and multifamily securitization is viewed in its own arena, separate and apart from single-family, and that it’s not a one-size-fits-all,” Berman says.

Representatives of the National Multi Housing Council (NMHC) were equally concerned about securitization in real estate mortgages, also wanting to protect the multifamily sector from unnecessary levels of risk retention.

“There has not been a huge problem in the whole multifamily lending sector,” says Jim Arbury, senior vice president of government affairs at NMHC. “There are some problems, but not anywhere near what’s happened in single-family housing.”

David Cardwell, vice president of capital markets and technology at NMHC, says his concerns were mostly addressed, and that he expects that “the cost of commercial mortgage-backed securities won’t be significantly impacted by risk retention rules.”

Initially, NMHC’s “concerns were that the cost borne by the borrower would be draconian” in terms of fees and interest rates, sending borrowers to other sources of financing. But in the end, that wasn’t the case. “Everybody involved in lending will have to do more,” Cardwell asserts.

“The other piece of it is … what the regulatory scheme with respect to the rating agencies will look like,” adds Berman. Conservative underwriting is a concern for both borrowers and lenders.

“Clearly, what we need to do is have adequate transparency, so that investors can understand for themselves what the risks and rewards are for different tranches of securities,” he says. “Our senior management is working hard on a whole staffing plan and marshalling resources from among our members to be working closely with the regulators as this whole new body of law comes into form.”

Again, what this bill will mean for rating agencies, credit card companies, consumers—truly everyone tied to the U.S. economy—will take some time to unfold.

As Chandan notes, “Anyone who would go so far as to say that the Act would solve all of our problems and preclude another financial crisis from ever occurring or, on the other hand, individuals who say it would almost immediately bring the financial system to collapse—both of those relatively extreme points of view, I think, miss that we won’t fully understand the impact of the legislation [until] over a course of a couple of years.”