Madox, the latest upscale rental property from Fields Development Group, is completely leased up. The milestone was reached less than 12 months after the 131-unit luxury apartment property was unveiled. 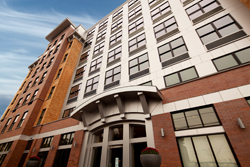 Jersey City, N.J.—Madox, the latest upscale rental property from Fields Development Group, is completely leased up. The milestone was reached less than 12 months after the 131-unit luxury apartment property was unveiled.

This was the perfect time and place for this type of rental development, according to Fields officials. “For rental properties, the market in the Gold Coast has been extremely successful,” Patrick Kretz, vice president of development for Hoboken, N.J.-based Fields Development Group, tells MHN. “And downtown Jersey City particularly has seen an influx of residents from New York City, Brooklyn and even outlying New Jersey cities. We see more educated tenants coming into this market. You have to be ahead of the competition these days, and the goal line is continually moving.”

Appealing greatly to new residents, he adds, is the LEED Silver certification the building earned from the U.S. Green Building Council (USGBC) this summer.

According to James Caulfield, Jr., a Fields principal, Madox was designed to be like no other rental property in the Jersey City market. “During every step of the design and development process, our staff worked diligently to create a building that distinguished itself,” he says. “Careful planning ensured it blended with the historic fabric of Paulus Hook. The knowledge of Green building experts and use of environmentally sensitive construction materials guaranteed Madox would be sustainable and energy efficient. And design and marketing professionals made certain we incorporated the finest home finishes and appointments and modern amenities that fit the lifestyles of today’s renters.”

The high-end finishes and features are likely the number one reason the building has leased up so quickly, Kretz believes. Some nearby buildings have similar amenities and all have roughly the same proximity to the city. But none have the finishes offered in this building. “The interior design, the luxury finish, is very close to that of a luxury condominium,” he says. “We have custom wood cabinetry, custom tile bathrooms. This is certainly a step above the norm in this area.”

What has the addition of Madox meant to the Jersey City luxury rental market?

“It is re-setting the bar for tenant expectations,” Kretz says.