The number of people enrolled in higher-education programs—20.5 million at the start of the current school year—explains much about investor interest in the student housing niche. Find out who’s buying and who’s lending now.

Of all the statistics tied to education, one number does much to explain why lenders and investors look favorably on communities geared to college students: 20.5 million. That’s how many people attended institutions of higher learning last fall. What’s more, enrollment will continue to rise well into the next decade, according to the National Center for Education Statistics.

“What really attracts (investors) to our biz is the stability of cash flows,” said EdR Chairman & CEO Randy Churchey during a panel discussion at the 2016 NMHC Student Housing Conference and Exposition last fall. “When you remind investors that when the economy goes into a recession, enrollments go up—a light goes on in their heads.”

Topping the list of student housing lenders last year were the government-sponsored enterprises, which completed $4.2 billion in student housing loan purchases between them. That breaks down to $2.6 billion for Fannie Mae and $1.6 billion for Freddie Mac, all of it for acquisition or refinancing, and represents a 27 percent year-over-year increase.

The GSEs’ vehicles for the sector are their DUS Student Housing Loan Programs, which offer permanent fixed-rate and floating-rate products starting at $3 million, typically for five- to 15-year balloon terms, or 20 to 30 years’ full amortization. Maximum loan-to-value is 75 percent of the asset’s appraised value.

Life companies were also an important source of capital for student housing deals in 2016, including some for construction, though they tend to prefer Class A assets in major markets. Also, many life loans are at lower loan-to-values, usually 65 percent or less. Trailing behind were CMBS and commercial banks.

As student housing matures as an asset category, sophisticated players are pursuing larger transactions that require intricate capital stacks. “When I started out, smaller investors were the only ones interested in student housing,” said Brendan Coleman, a managing director for Walker & Dunlop. “That’s changed. Institutional investors are now very interested in the property type, and they’re more sophisticated borrowers, so the deals tend to be a lot more complex.”

A case in point is the financing for two student housing portfolios acquired by Scion Student Communities LLC, a joint venture of The Scion Group LLC, the Chicago-based owner-operator; GIC, which manages foreign investments for the government of Singapore; and the Canada Pension Plan Investment Board. Both portfolios were financed through Fannie Mae facilities arranged by Coleman and Will Baker, a Walker & Dunlop colleague.

For the first acquisition, which involved six student housing assets, Walker & Dunlop drew on the expansion and borrow-up features of an existing Fannie Mae credit facility to achieve $233 million in proceeds. A second Fannie Mae facility of $416 million was structured for the acquisition of 11 assets. That facility offers fixed- and floating-rate components with varying maturities. Many of the properties qualified for the GSE’s Green Certification Program, which discounts interest rates for properties that have been certified sustainable by a recognized organization. 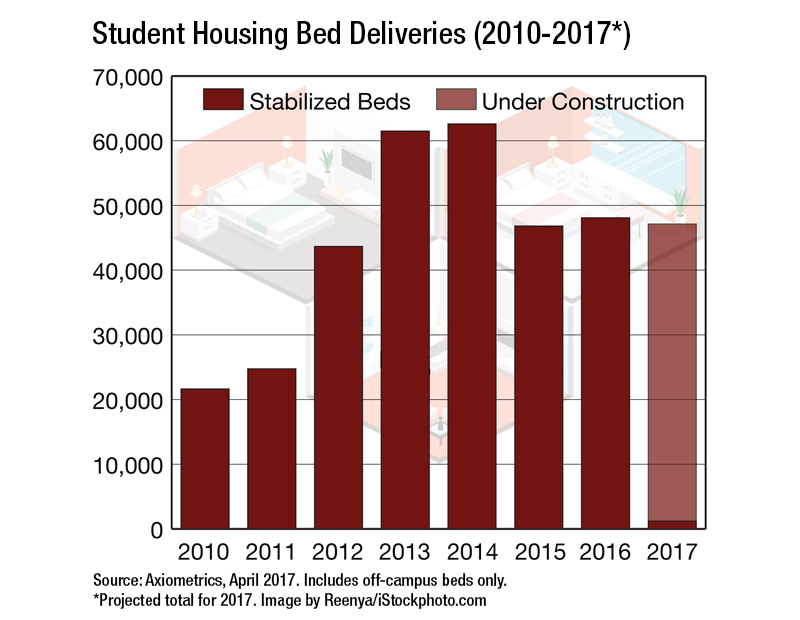 Refinancing is another source of considerable demand in the student housing subsector, and those deals often require a touch of creativity. Such was the case when Capstone Capital negotiated a loan for The Boundary at West End in Greenville, N.C., which provides 550 beds for East Carolina University students. The sponsor, Taft Family Offices, sought at least $40 million in order to take out $34.4 million worth of existing debt plus its development equity.

Development financing, too, is in demand, as attested by the 15,400 units that the National Center for Education Statistics estimates were in the pipeline at the end of 2016. Creative structures are emerging to meet these needs. Blinn College, a 134-year-old county institution in eastern Texas, is relying on a public-private partnership to expand housing at its flagship campus in Brenham. Servitas LLC is developing the 465-bed facility, which will meet the growing needs of a resident population that already numbers more than 1,300, the most of any community college in Texas.

At the heart of the plan is a partnership with National Campus and Community Development Corp., an Austin-based nonprofit that specializes in structuring public-private ventures. A nonprofit entity, National Campus and Community Development (NCCD)-Blinn College Properties LLC, would recieve a loan from the U.S. Department of Agriculture. The college would then lease the facility from the nonprofit for 40 years. When NCCD-Blinn College Properties repays the loan, ownership of the facility would revert to the college.

One hitch is that USDA financing is on hold, which has pushed back completion a year to fall 2018. To move the project forward, Blinn’s trustees authorized $2 million in interim financing, which will be repaid from the proceeds of the USDA loan, or if necessary, from the proceeds of bonds issued by the nonprofit New Hope Cultural Education Facilities Finance Corp. If the plan does pan out, it could serve as a model for cash-strapped schools with a need for housing.

Originally appearing in the June 2017 issue of MHN.