EXPO Real Special Report: Redeveloping Cities in the Age of the Startup

Speakers from Lisbon, Zurich, Birmingham and Barcelona revealed a growing trend in Europe’s markets: nurturing innovation and businesses created inside the city as a supplement to the constant need to attract established investors.

Munich—After a large part of yesterday’s development forums were dedicated to the burden that cities are seeing in dealing with growing population and the struggle that is accommodating those citizens, one of today’s highlights at EXPO Real was organizing urban areas to manage the advent of the digital age. Speakers from Lisbon, Zurich, Birmingham and Barcelona revealed a growing trend in Europe’s markets: nurturing innovation and businesses created inside the city as a supplement to the constant need to attract established investors. 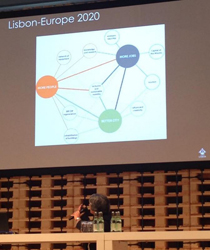 A large number of municipalities have already used local resources such as owned land or defunct historical buildings and vacant office space to facilitate the transition from idea to business for young residents that live and study in the city. Lisbon City Councilor Graça Fonseca explained in her keynote that the Portuguese capital’s new master plan focuses on the creation of jobs in some of the struggling areas of the city, while local government initiatives such as redeveloping the waterfront and improving common spaces in troubled neighborhoods aim at changing the local landscape and priming it for future business development.

As is the case with most of the cities making a case for investment at EXPO Real this year, encouraging startups and creating innovation clusters is a large component of Lisbon’s vision for its future. The city is betting big on its concept of becoming an Atlantic Business Hub, and its efforts were rewarded this year when Lisbon was named, along with Northern Ireland and the Spanish Region of Valencia, as a European Entrepreneurial Region for 2015.

Mouraria in Lisbon is one of the best examples of the city’s strategy of changing the perception of troubled areas. The district is the city’s most diverse area, and that posed a unique challenge in terms of new development. Local officials established offices in the area as a form of leading by example, and a number of projects have recently shaped Mouraria into a vibrant, diverse, for-tech district with a focus on local startups. Throughout the city, old buildings are being set up to become the future homes of young professionals whose ideas are being supported so that one day they may provide value back to the local job market and Lisbon’s image as a place that is safe for new ideas.