European residential markets are steadily growing and drawing investors looking to diversify, according to panelists at Expo Real.

Although lacking the transparency and established institutions of U.S. hotspots, European residential markets are steadily growing and drawing investors looking to diversify. This has been one of the main starting points of discussion for this year’s residential investment briefing at Expo Real, Europe’s largest real estate and investment conference.

In terms of European investment opportunities, residential real estate falls within the ‘alternatives’ category, Mitsostergiou said, which excludes the three main asset classes—office, retail and industrial. Investors have increasingly turned to residential for portfolio diversification in the recent past, mainly due to low volatility, good fundamentals and stable NOI.

Activity in the European multifamily market is heavily clustered in a handful of areas. “In the past few years, the countries that have dominated residential investment have been mainly Germany, Sweden, U.K. and the Netherlands, and that’s partly because they have very well established institutionalized housing sectors. The investors, 70 percent of them, are also from only four countries,” Mitsostergiou pointed out.

Some of the main drivers might sound familiar to an observer from the U.S. Although Europeans traditionally have a strong preference for owning, the recent rise in housing prices has pushed many towards renting, boosting household creation in that sector. Factor in positive demographic trends, increased student mobility and a lack of sufficient quality inventory in some gateway cities, and you’ll get a market that now provides more opportunities that promise attractive returns. European residential investment, Mitsostergiou said, offers better yields than other asset classes, albeit cap rates are steadily compressing.

As evolving markets tend to do, a good number of European countries offer alternatives as potential next big tickets in the multifamily field. Considering economic factors, the supply and demand balance, demographic evolution, academic activity and other factors, Mitsostergiou explained that several secondary markets have a good chance of offering solid residential opportunities in the near future. The list includes small but dynamic markets such as Ireland, Austria and Norway.

Although the sector is rising, Europe still holds a couple of relevant downsides, Mitsostergiou said. When compared to the U.S., benchmarking has a long way to go as the sector is maturing and investors are feeling the need for a reliable performance index. Multifamily in Europe is less transparent than its North American counterpart and less mapped when compared to other asset classes.

Roberts began by reiterating diversification against the major “real estate food groups” as a major driver for residential investment in Europe, also emphasizing the fact that different niches within the field—such as regular market-rate, student housing or senior living—have different characteristics and shouldn’t necessarily be treated in bulk when discussing market conditions. 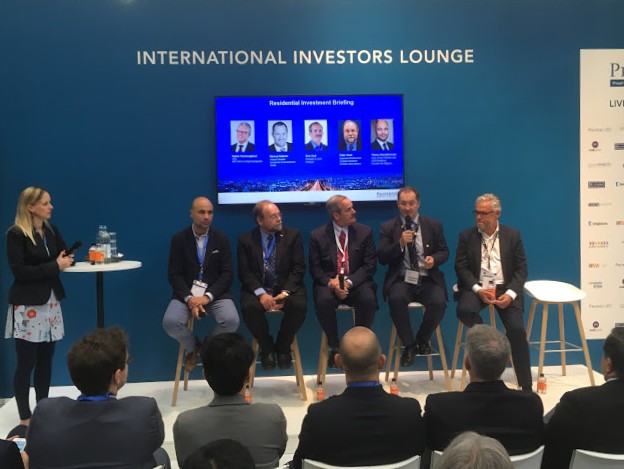 “Student housing, for example, came across as the fairly resilient asset class in 2008-2011 in the U.K., where we saw continued investment from private equity and from institutional investors. Occupancy was maintained at around 97-98 percent. This is across schemes of 400 or 500 units,” Roberts said.

Bringing the outsider’s perspective, Graf mentioned that although the U.S. residential market is more mature across all asset classes, European metros are moving in that direction and investor interest is growing. “We look at other markets across the pond and we see that coming. It’s been slow to come but part of the reason we launched a platform in Canada was that although it resembles the U.S. in many ways, the opportunity of that market was very similar to many European markets—a lot of opportunity,” he added.

Addressing marketing and business models, Nonnengässer returned to the link between markets on both sides of the Atlantic: “You see it not only in continental Europe. It comes from the U.S., it comes from the U.K., where you have brands which have been rolled out about five or 10 years ago … Those who have started in continental Europe follow this trend as well, as we do.”

The forum ended with discussions of transparency, benchmarking and available data in European markets. The panelists agreed, the three aspects constitute important tests for any maturing environment. “Institutional investors will drive that. They will absolutely insist on it, whether it’s through your property operating software that can pull all these analytics out of the system… It’s an absolute critical point and we’ve seen that as institutions have dominated the multifamily space in the U.S. The bar has been lifted quite high for us on information and you’ll have to have that,” Graf said.