Since the Great Recession, the U.S. has increasingly become a renter nation. Renters encompass more than one-third of total U.S. households, with 18.7 million households residing in buildings with five or more units, according to National Multifamily Housing Council data. 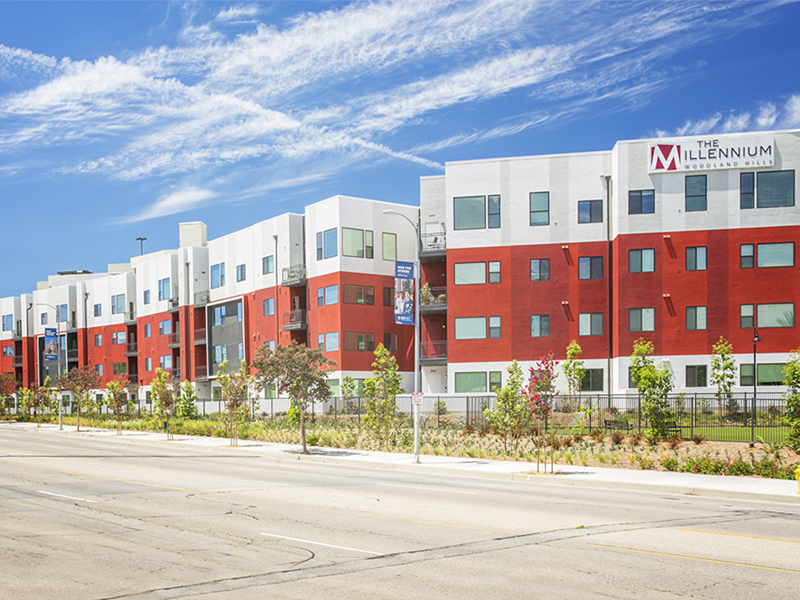 The Dinerstein Cos. completed The Millennium at Woodland Hills in 2015, achieving LEED Gold certification through energy conservation features such as drought-tolerant landscaping, ENERGY STAR appliances and programmable thermostats. It incorporates smart home technology allowing residents to control and program lighting and temperature settings to save energy and increase their comfort. Image courtesy of The Dinerstein Cos.

Since the Great Recession, the U.S. has increasingly become a renter nation. Renters encompass more than one-third of total U.S. households, with 18.7 million households residing in buildings with five or more units, according to National Multifamily Housing Council data. Growing rental demand has led to a development boom over the last eight years, providing much-needed multifamily housing stock across the country. However, new construction combined with a growing population also means a greater environmental impact. Not to mention the bulk of existing multifamily housing was built 30 to 40 years ago, when the energy code standards were just emerging. While today’s standards are stricter, some 40 percent of U.S. energy consumption still comes from buildings, with residential properties using more energy than commercial (22 percent vs. 18 percent), according to the U.S. Energy Information Administration.

Encouraging developers to invest in efficiency can be a challenge if they don’t have the proper knowledge or motivation.

“For a builder or developer who has never invested in energy efficiency before, there’s a challenge of learning what standards you should shoot for and what strategies you should implement,” noted Krista Egger, director of initiatives for Columbia, Md.-based Enterprise Community Partners.

To overcome this education barrier, government entities and utilities are increasingly creating programs to help multifamily owners identify and implement energy-efficiency improvements, while offering favorable incentives. As renters themselves become more energy conscious, owners are under further pressure to incorporate sustainability measures. Forward-thinking developers are making strides to improve their portfolios’ efficiency, but in order for energy efficiency to take hold industrywide, owners and managers need to better understand the benefits of green building.

For multifamily housing, energy costs typically account for 25 to 35 percent of operating costs, according to the U.S. Department of Energy (DOE). Any sensible owner would look for ways to reduce this expense, but embarking on a full-fledged efficiency-upgrade program could sound intimidating.

An easy first step is to start with the low-lying fruit, like installing low-flow water fixtures and more efficient lighting, said Don Brooks, director of sustainability for Houston-based development and management firm The Dinerstein Cos. “Those are just no brainers … that can have a significant impact on your overall utility usage.” For some older properties, upgrading to more efficient lighting alone can reduce utility costs 10 to 20 percent, he added.

Overall, making cost-effective energy upgrades is estimated not only to improve efficiency by 15 to 30 percent but also to result in savings of close to $3.4 billion annually for owners and residents, according to the American Council for an Energy-Efficient Economy (ACEEE).

In addition to providing cost savings, many upgrades have relatively short payback periods. While as recently as two or three years ago the cost and efficacy of LED lighting was in question, it is now “the next big wave of replacement,” with a relatively long lifespan and payback of less than two years, noted Tony Liou, president of Torrance, Calif.-based energy consulting services firm Partner Energy.

Of course, the ease of making these changes depends on whether the project is new or a retrofit, Egger said. While a new development offers a blank slate, retrofits require portions of the building to be removed to access and upgrade certain systems or repair them.

One strategy is for an owner to consider energy retrofitting when planning a larger capital improvement program, Liou suggested, adding that the incremental cost of implementing a more-efficient system is “negligible, and sometimes free if you look at utility incentives.” 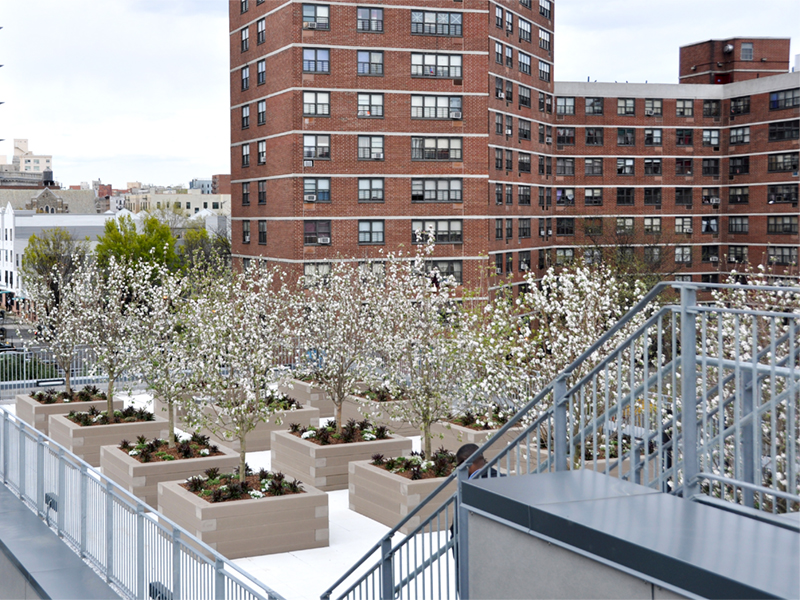 For owners concerned about the costs of making upgrades, there are numerous resources available to assist them. Especially in recent years, utility companies, federal programs and financing agencies have ramped up their offerings to encourage more energy-efficient development.

Utilities and related program administrators have increased annual spending on multifamily programs by at least $180 million since 2011, according to a February 2017 ACEEE report. These programs range from basic services—such as direct installation of no- or low-cost energy-efficiency measures, and financial incentives for purchasing and installing energy-efficient equipment—to more comprehensive services like retrofits, including insulation, air sealing and HVAC upgrades.

According to the ACEEE report, 38 out of the 51 metro areas it reviewed had at least one dedicated multifamily program offered by utilities, up from 30 metro areas in its 2013 report. Efforts from organizations like Energy Efficiency for All are working with several states to advocate for the creation of more of these incentive programs.

These programs are easier to create in places like California and cities like Austin and Denver because of greater government support. State and local policies that “push for green building” encourage utility companies to “push to incentivize you to be greener as well,” Brooks said.

The California Solar Initiative, for example, is a rebate program that partners with utility companies. Jonathan Rose Cos.’ Rose Smart Growth Investment Fund received a cash rebate to include a 15,000-kilowatt solar thermal rooftop system at its El Granada community in Berkeley, Calif. The Bay Area Multifamily Building Enhancements program also funded 50 percent of the energy conservation measures that the fund implemented, including a boiler retrofit. From 2013 to the third quarter of 2016, the fund reduced the property’s energy use by 9 percent and carbon output by 14 percent.

Increased financing opportunities have allowed energy-efficiency investment to take off in the affordable sector, Egger noted.

When Enterprise launched its Enterprise Green Communities certification program in 2004, only “the highest achievers in the affordable sector” thought about building efficiently, she said. Today, the sector has widely adopted energy efficiency, largely because owners are “mission driven.”

“They’re invested in making sure the properties they build are going to be affordable not only to rent upfront but affordable to operate over the long term … and making sure that these are healthy buildings, too,” she said.

Without the capital drive to invest in efficiency, market-rate owners had been slower to widely implement energy efficiency. Their most common motivation “was the upgrade cycle for equipment and systems,” Liou explained. Owners would likely only consider energy efficiency when looking to “refresh a property” and they’d often “do the minimum requirement possible to get their building running again for the appropriate use.” However, he noted, there’s been a “substantial uptick in demand from the market-rate side” as more green financing options become available.

The split incentive has also been an issue, as the majority of tenants pay for in-unit utilities, making it difficult for owners to benefit directly from efficiency improvements, Liou said.

To combat this, multifamily programs are beginning to offer incentives for in-unit and whole-building measures and communicate to owners the non-energy benefits of making efficiency improvements, such as increasing the value of the asset and reducing overall maintenance costs, the ACEEE report noted.

“I’m starting to see more developers and owners advertise the green or sustainable elements they’re incorporating … because they understand the new, educated renter, especially at the luxury level, wants to be more sustainable,” Brooks said.

However, he added, many owners aren’t taking the extra step of building to obtain green certification.

In an effort to differentiate itself, Dinerstein made a commitment in 2007 to build all of its multifamily housing to LEED Silver certification or better, and the firm has been able to build to LEED Gold or better in the last year and a half, he said.

In addition to giving the firm a competitive edge, advertising the savings from energy-efficiency features comes in handy when attracting buyers to its properties. 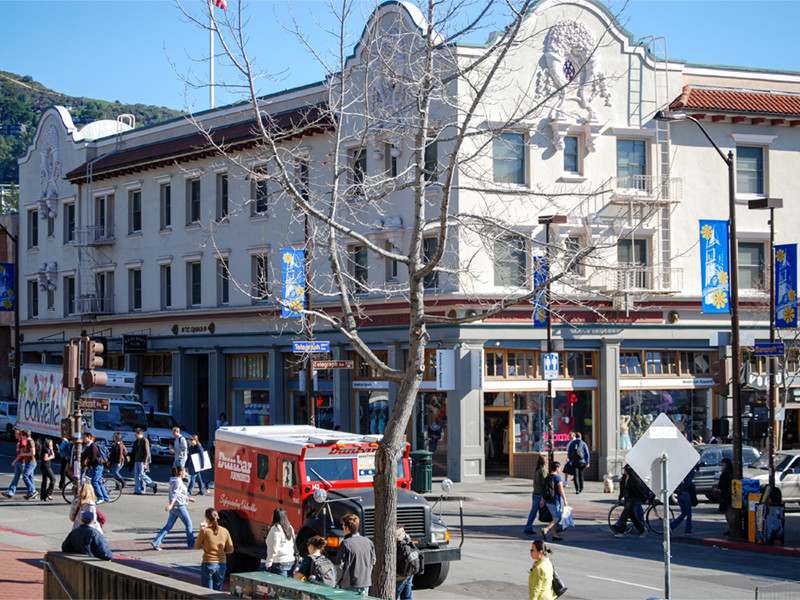 Jonathan Rose Cos.’ Rose Smart Growth Fund was able to implement energy conservation measures at El Granada in Berkeley, Calif., with the help of California and Bay Area financial programs. Courtesy of Jonathan Rose Cos.

While developing an energy-efficient building is the first step, Brooks emphasized the importance of having efficient operations in order to maintain a sustainable property. Training property managers on how to run high-performance equipment and educating residents through property events, energy guides and social media are some ways Dinerstein keeps its properties running efficiently.

“The last thing we want to see is a building that paid for top-of-the-line, highly efficient systems to be installed, but onsite staff has no idea how to maintain it,” Egger said. “It’s critical to pass along that information from the design to the construction to the operations stage to ensure you’re going to achieve the savings you’d hope for.”

For owners to get the most out of their investment, using benchmarking to monitor their building performance over time has also become an important next step, Egger added.

Jonathan Rose Cos. takes every project it builds or buys through the Enterprise Green Communities program, which comes with third-party benchmarking from BrightPower, firm President Jonathan Rose said. “We try to track the reductions in energy usage and cost, water usage and cost, and climate impact for every investment we make.”

To encourage wider adoption of benchmarking, local governments are announcing disclosure policies at a rapid pace, Egger said. Eleven local jurisdictions (largely major cities like New York, Chicago and D.C.) and California have multifamily benchmarking and transparency requirements, which has encouraged utilities to share whole-building performance data, according to the ACEEE report.

The Better Buildings Challenge was expanded in 2013 to include multifamily, asking owners and managers to commit to improving their buildings’ efficiency by 20 percent or more over 10 years, conduct an energy efficiency portfolio assessment and report their performance data.

While whole-building performance data has become more accessible, it is still a challenge for multifamily owners to accurately compare their performance to similar properties in their area due to the complex structure and diversity of the industry, Egger said.

“The resilience question will be tied into energy efficiency in a more actionable way in the future,” which will include incorporating more renewable energy sources like solar and beginning conversations with other owners about creating a “shared solar system,” Egger said. For example, since a multifamily property and a school reach their energy usage peaks at different times of day, they could both benefit from using the same system, reducing the upfront cost burden, she explained.

While these large-scale solutions are difficult to implement now, increased collaboration between stakeholders and the availability of financing will help move these projects forward.

“As efficiency standards get higher and higher,” Liou noted, there will be a greater call for energy generation, as well. Part of reaching that goal will be investing in the current U.S. building stock, which is “just aging across the board, so that drive to improve or reinvest in those assets will always be there, and efficiency will be a big piece of that.”

Originally appearing in the April 2017 issue of MHN.