The Motor City sets sight on a second act.

The first thing you learn in Detroit is that you don’t know anything about Detroit. Most Americans—even many Michigan residents—perceive the city as a crime-ridden, crumbling conundrum.

Spend a day or two in Detroit and you’ll likely come away with a different impression: this is a place that, as one lifelong resident put it, “has gone through hell, and now, very quietly, there are pockets of rebirth.” 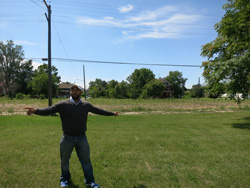 Adam Hollier stands by one of the urban prairies that Hantz Farms has planted with trees.

Rebirth, encore, renaissance—these are the kinds of words you hear a lot of when talking to passionate Detroiters. Their enthusiasm is infectious. The city’s transformation from a metropolis of 2 million to a city of 688,700 (and falling)—and what comes next—is a story that fascinates. Comebacks, after all, are one of America’s favorite plotlines.

Austin Black II has a problem, one that most residential real estate agents or brokers in America would envy. He needs more condos and lofts to sell, because buyers are beating down his door. From 2013 to 2014, Black’s business at City Living Detroit, a full-service residential brokerage specializing in the greater Downtown and Midtown neighborhoods, has jumped more than
25 percent.

“It would be higher if there was more inventory. The average sale price is up substantially over last year,” Black notes. In fact, the prices for the units he has sold—starting at $200,000 and going up to $600,000 —are virtually unheard of in still-struggling Detroit’s single-family home market.

Since the 2008-2010 economic slump, just one new for-sale condo project has come online in the coveted Midtown area, home to Wayne State University and Detroit Medical Center. Other housing projects under construction are rentals, and while rents are on the upswing, Black says his clients would prefer to buy.

“Pre-recession, most buyers were all young professionals, either right out of college or not too far out. That market has changed drastically to include young professionals, mid-career professionals, established executives and empty nesters. It’s a very diverse market now, more typical of what you see in other major cities,” Black says. He’s even seeing many locals moving back toward the city from the suburbs, lured by a low-maintenance multifamily lifestyle.

There are incentives to urban living for buyers and renters alike. Nine major Detroit employers participate in a program that provides a $20,000 forgivable down payment loan for a home purchase near the commercial core, or a rental subsidy paid directly to the landlord.

Adding to the future appeal of the neighborhoods Black sells is the ongoing construction of the M-1 RAIL, a 3.3-mile long circulating streetcar along Woodward Avenue that will begin to link the downtown core with the outlying suburbs. Considering the vast expanse of territory that makes up Detroit—the city is 149 square miles in size —it’s just a start to fixing a chronic transit problem. If you live or work in Detroit, locals say, a car or bike is the only way to efficiently get from place to place right now.

Jeanette Pierce grew up in Detroit in the suburbs and spent most of her 20’s living downtown. She loved the lifestyle so much that she turned her passion into a full time job: reputation management and education about what’s really going on in D-town. Today, she and her husband, a scientist, are homeowners in Lafayette Park, a downtown adjacent neighborhood that’s just a few blocks from the businesses, casinos, stadiums and hotels in the downtown core.

Jeanette calls Detroit “MY city” with the ferocity of a mother bear protecting her cub. She started her tours to show fellow locals that “we’re not martyrs” for choosing life outside of suburbia. Her business is now part of a foundation-funded non-profit, D:Hive, that introduces new corporate recruits to an ever-changing Detroit, provides resources for startups, and continues to educate locals.

There’s no shortage of inspired young people who want to move to Detroit and make a difference. “We have a really great self-selection of awesomeness. The great thing about Detroit is that it’s big enough to matter in the world, but now small enough that you can matter within it,” Jeanette says. But right now, newcomers may be having a hard time finding a place to live. The Downtown/Midtown apartment vacancy rate hovers around 2-4 percent, multiple sources confirmed.

Jeanette’s personal downtown living experience illustrates the hot market. She spent several years living in an apartment community once called Trolley Plaza, now owned by Village Green and rebranded as Detroit City Apartments. Over the last five years, the $750 she paid for a spacious two-bedroom unit with a balcony and view of downtown’s historic buildings has jumped to $1,400.

The situation is similar at Lafayette Towers, a 600-unit community near her new home. Rents there have come up 50 percent over the last few years—and with the exception of a few units under renovation, the towers are 100 percent occupied, according to fee manager Fourmidable Real Estate.

Detroit has historically been a single-family home city—with thousands of houses built quickly for auto industry workers. But today, Millennials moving in are more interested in a walkable urban lifestyle. The estimated demand for new apartment units in the downtown and Midtown neighborhoods is around 5,000, according to one developer. Only 2,000 units are in the construction pipeline.

Forward to the future

The M-1 project’s ongoing construction, despite snarling traffic around Downtown, is visible evidence that Detroit is beginning to address a major problem: lack of effective public transit and dependency on private vehicles. Unlike tearing down old houses, it’s a sign that new investment in the city is a reality.

“It will ignite tremendous new economic development and job creation and will provide a foundation for improved and expanded public transit throughout the region,” says Matthew Cullen, president and CEO of the project. Funding was achieved through private-public partnership, and the modern streetcar should be ready for passengers in 2016.

With forward momentum in downtown and in outlying suburban areas (see accompanying article), longtime Detroit residents like John Mogk, a professor at Wayne State University, are finally ready to declare that the city is started down the road to recovery.

“For the last 50 years, people have talked about turnaround, and it was evident to me and others who were close to it that it wasn’t happening,” Mogk says. “Now, there are little shoots of progress in a whole variety of places where things are starting to happen.” Detroit’s encore, it seems, is just beginning.