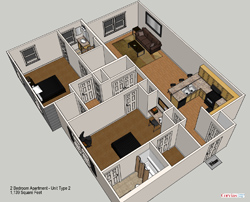 Completed in just 10 months, Phase One of Summerfield Square was built to welcome ACOM’s inaugural class. It is made up of three residential apartment buildings, each 30,864 square feet in size. The student housing features 117 bedrooms and a 3,000-square-foot clubhouse. Summerfield Square gives students an opportunity to enjoy one- or two-bedroom apartments, each one featuring a private bathroom and fully equipped kitchen.

When completed, Summerfield Square will include six apartment buildings, each featuring 24 apartments and 39 bedrooms.

Also benefiting ACOM students will be outside common areas, featuring a basketball court, meditation garden, pet area and playground for family use.

Getting the project completed in time for students to move in on Friday, July 26 was not without its hurdles. “From a timing standpoint, what we were faced with could be perceived as a real challenge,” Corvias Campus Living managing director Kurt Ehlers tells MHN. “We agreed to move forward in 2012, and at that time it left us with less than 10 months from the time we entered into the agreement to when students would be pulling up with their moving vans.”

Corvias benefited from its experience and a great collaboration in completing the project so expeditiously. “It’s understanding how to work in a true partnership, where your interests are aligned,” Ehlers says. “As soon as you have competing interests, it’s almost impossible to make the right decisions for the long haul. ACOM was open to listening, and to getting comfortable with the idea that our interests were aligned with theirs. Working with them, we were able to work through that constrained time schedule.”

Corvias was also able to leverage geographical efficiencies. Though Corvias is based in East Greenwich, R.I., “we consider ourselves a fairly local company in the Dothan, Ala. community,” Ehlers says. “Since 2005, we’ve operated the housing program for the [U.S.] Department of Defense at Fort Rucker in Dothan.”

In that eight-year period, he adds, Corvias has invested more than $300 million in the housing program at Fort Rucker. “We have had a real footprint, a real presence in the community, for some time,” Ehlers says.

Corvias Campus Living knows medical school programs can be tough. Providing the chance to live on campus, surrounded by their peers, offers distinct upsides to med students, Ehlers says. “Particularly at ACOM, students who live at Summerfield Square will be connected right into the school’s computer network. This will create a distinct advantage in recruitment for ACOM,” he concludes.