The property’s price more than doubled since it last traded a decade ago. 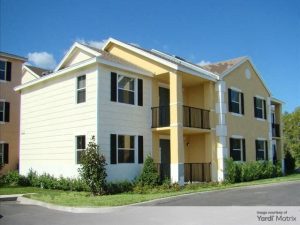 Cortland has bought the 379-unit Falcon Square at Independence in Winter Garden, Fla., for $116.8 million, according to Orange County records. JLL brokered the sale on behalf of the seller, Venterra Realty.

The property last traded in 2012, when the now-seller bought it for less than half its current price—$43 million.

Built in 2008, the community offers one- to three-bedroom units ranging from 751 to 1,369 square feet, Yardi Matrix data shows. Each unit has walk-in closets, breakfast bars and screened-in private balconies. Community amenities include a pool, two basketball courts, a dog park and a fitness center. A business center and detached garages are also available.

Located at 14600 Ave. of the Groves, the property is near Freeway 429, offering easy access to downtown Orlando. Universal Orlando is some 15 miles east of the property, while Disney’s Hollywood Studios is some 11 miles southeast.

Being in the Independence PUD—a 2,100-acre master-planned community—Falcon Square at Indepence is also close to several elementary and middle schools, which created strong investor interest, said JLL Managing Director Jay Ballard in a prepared statement. Ballard, along with Managing Director Ken DelVillar, led the JLL team that represented the seller.