Condos in Tallest Residential Tower Outside of Manhattan Selling Fast

Miami—Now more than 50 percent sold, the condo project Brickell Flatiron at 1001 South Miami Ave., which is a block from downtown’s Brickell Ave., is slated to begin construction later this fall. The 549-unit, 64-story development will also have the distinction of being among the tallest residential towers outside Manhattan when completed in 2018.

The FAA recently signed off on the building’s height. Altogether, Miami’s urban core is now home to 18 towers planned to rise in excess of 492 feet high, which is the threshold for skyscraper status.

The tower is the latest example of high rise development in Miami’s urban core, which is emerging as one of the country’s most densely populated neighborhoods as it builds upward. Downtown Miami’s population has more than doubled—from 40,000 to 80,000—since 2000, according to a recent study by the Miami Downtown Development Authority.

The property will include one- to five-bedroom units, including a small number of penthouse and duplex residences measuring up to 6,220 square feet. All of the units will be fitted with all-glass elliptical balconies, imported Italian finishes and German appliances. Preconstruction sales are currently underway, with prices averaging about $750 per square foot. 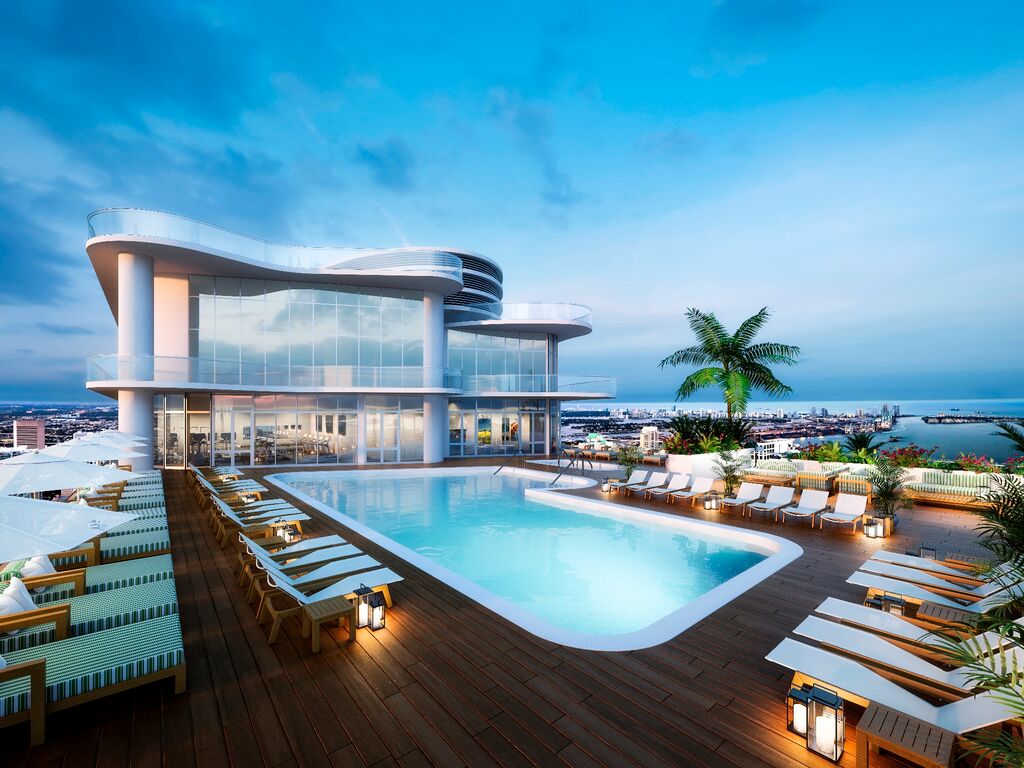 Common amenities include an 18th-floor pool (at the “Club Level”) designed specifically for lap swimming; a children’s pool and playroom area; a screening room with a theater-quality projection system and wireless tablet-based controls; private event and meeting space; a billiards and cigar room; and a wine room with climate-controlled lockers. The property will also include personal concierge services, with staff available on site to help residents with (among other things) beauty and salon appointments, dog walking services and restaurant reservations, grocery delivery and automotive care.

Developer CMC Group has also opened the tower’s rooftop up to the entire building, with plans for a Sky Spa that will include a pool, spa and fitness center. The Sky Spa will be 736 feet above street level, several floors above the tower’s penthouses, which are priced from $2 million and up.