A joint venture of Lendlease, The John Buck Co. and Intercontinental Real Estate Corp. broke ground on a 586-unit community on the former site of skin care manufacturer H2O Plus. 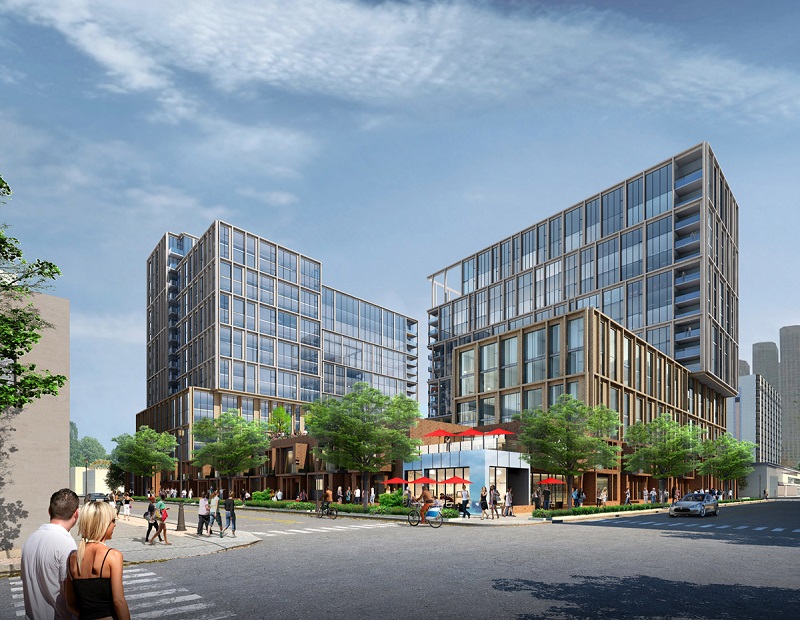 Lendlease, The John Buck Co. and Intercontinental Real Estate Corp. broke ground on a two-tower mixed-use development in Chicago’s West Loop. The upcoming apartments at 845 W. Madison Ave. will occupy the site that used to host skin care manufacturer H2O Plus and are slated for delivery mid-2020. The building designers, GREC Architects, are preparing an entirely new construction, although parts of the mosaic murals which used to adorne the H2O facility’s façade will be donated to nearby Skinner Park.

The community is going to provide 586 units—including 13 townhomes with private entrances along Peoria and Monroe streets—and approximately 10,000 square feet of retail space. The 17-story towers will be connected via a two-story podium which will host the retail stores and a parking with 278 available spaces. On top of the podium, GREC Architects designed an outdoor deck with a pool, lounge seating, fire pits, grilling stations and green spaces. Additional amenities are expected to include a fitness center, entertainment lounge, game room, communal chef’s kitchen, coworking space and a dog run area.

“The two towers will reflect the spirit of the neighborhood with two narratives but a single story. The interior of the north tower will embody an energetic, eclectic and rustic aesthetic while the south tower will feel established, refined and polished. The towers will play off the scale of the city while the townhomes will ground the development and enhance the pedestrian experience of the neighborhood,” said Greg Randall, managing principal of GREC Architects, in a prepared statement.

The property will be a few blocks away from the headquarters of Google and McDonald’s and steps from another residential tower under construction, Fifield’s 44-story tower at 727 W. Madison St. Residents will have access to several restaurants on the popular Randolph Street, Kennedy and Eisenhower expressways, Ogilvie Transportation Center, Union Station and several CTA bus lines.