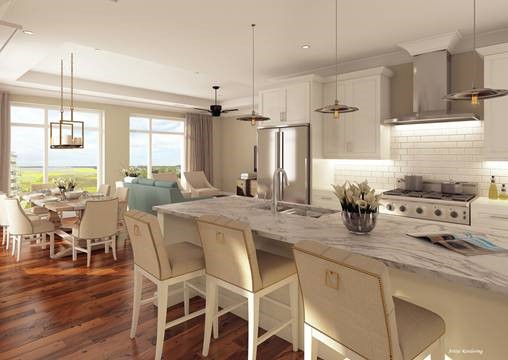 Charleston, S.C.—Tides IV, a Mt. Pleasant, S.C., luxury condominium from East West Partners, has now sold 32 of 54 residences for an average sales price of almost $1 million. The project is expected to be complete and open in early fall of this year.

The luxury condominium market has blossomed in many other cities, but Tides IV is the first such project in the Charleston market since 2007-08. East West Partners reports there are no towering skyscrapers in Charleston for a number of reasons, including geography and regulatory statutes, which have left the luxury condo market dormant.

The seven-story Tides IV, with its raised salt-marsh views and amenities, has proven to be the exception to the rule. It has become popular with buyers who appreciate Charleston’s history, but want the latest advancements in both modern living and convenience.

The location of Tides IV has also been a major selling point. The condominium community is minutes from both historic downtown Charleston and two area beaches.

“There’s a little history to it,” East West Partnership managing partner Miller Harper told MHN. “There were three very well-constructed condominium buildings along the waterfront in Mt. Pleasant before the recession. And they were called the Tides Community. Due to timing and more, 50 of the 120 residences remained unsold as the recession set in. Along with our partners, we got involved in repositioning those units in 2012 and 2013. We sold the final 50 units of the community, and found there was a lot of demand and significant pricing increases.”

“We saw there was a pent-up demand for this lifestyle,” he continued. “Since no condominiums have been completed since 2007-08, we acquired the site next to those three buildings along the waterfront in Mt. Pleasant and began building Tides IV.”

East West Partnership officials particularly liked the fact that in addition to Charleston residents seeing Tides IV as a primary residence, buyers from outside the area would be attracted to the development as vacation and retirement destinations. “It had all those drivers that attract us to what we call ‘urban resorts,’” Harper said.

Ground was broken on the project in February, 2015. Tides IV includes three nearly 3,000-square foot penthouses, as well as a mix of one- to three-bedroom condos extending in size from 1,200 to 2,400 square feet.

When East West Partnership was considering acquiring the site, the close proximity of Whole Foods, Trader Joe’s and a hospital system was among the site’s upsides. “In addition, this has great waterfront views, while being close to all those conveniences,” Harper said. “But it’s a more expensive place to build because we have to build on deep foundations.”

The 1.8-acre site cost about $30 a foot to acquire and the development costs were about $250 a foot. “It’s a thrill for us to deliver the first new luxury condominium project to this market,” Harper said. “Our general contractor has done a wonderful job of staying right on schedule, we’re delivering when we want and our purchasers are thrilled about the quality of the project.”