How this strategy improves the indoor environment and maximizes energy savings.

Multifamily residents are more focused than ever on the health and comfort of their interior environments.

That concern, heightened by COVID-19, has resulted in an increasing number of apartment projects to be designed and built to the Passive House standards promulgated by the Passive House Institute US, a non-profit organization committed to making high-performance passive construction the mainstream market standard.

“Tenants are seeking out these buildings now because they want to live in buildings that have good indoor air quality—and they’re willing to pay more money,” said Katrin Klingenberg, PHIUS executive director. “For a for-profit developer, if people are willing to pay even $50 more a month, that translates into direct value for your building.”

According to PHIUS, passive buildings are designed and built in accordance with the following five principles: Continuous insulation throughout the entire envelope without any thermal bridging, an airtight building envelope that prevents infiltration of outside air and loss of conditioned air, high-performance windows, balanced heat- and moisture-recovery ventilation, and use of a minimal space conditioning system.

Multifamily developers who seek PHIUS certification should expect a cost premium of approximately 0 to 3 percent over the standard Energy Star construction baseline. But the additional cost is returned via significant energy savings. PHIUS buildings perform 60 to 85 percent better than traditional ones in terms of energy consumption, according to PHIUS, making Passive House a viable option for affordable properties as well as luxury.

The project’s playful roofline denotes a bird in flight. The design evocative of a bird’s wings not only provides shade but inspired the team to rebrand the project “Finch”. Image courtesy of Robert Umenhofer 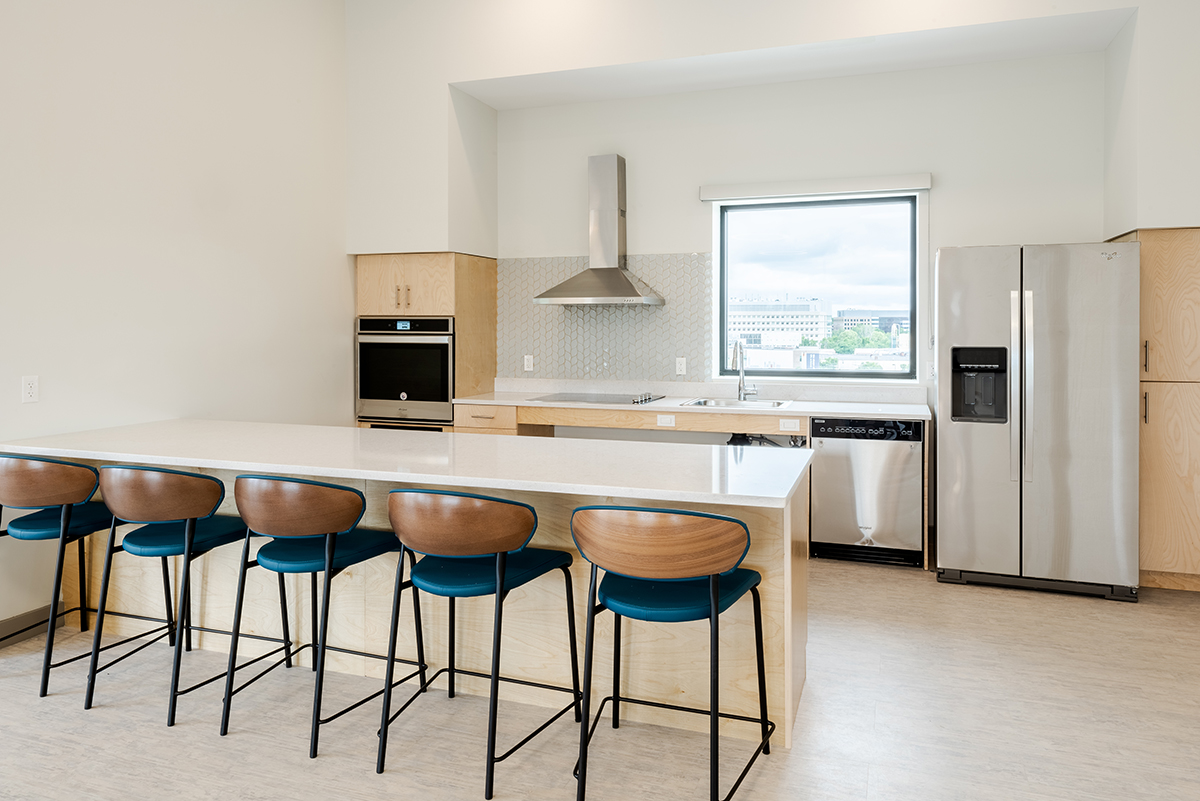 A community engagement coordinator will be on-site facilitating programs for all residents including healthy cooking classes, as well as a farmer’s market program and gardening. Image courtesy of Robert Umenhofer

HRI, which has completed net-zero projects and three new-construction developments that were LEED Platinum certified, likes to incorporate sustainability into its developments “to provide healthy housing for our tenants,” said Jane Carbone, HRI’s director of development.

Finch Cambridge was designed to reflect the wooded areas of the adjacent Fresh Pond Reservation through a treehouse design. Residents are encouraged to use the open stairwell and to take advantage of walking trails nearby. Amenities include a large multipurpose community room and kitchen, resident lounge, study rooms, a rooftop terrace and landscaped outdoor spaces.

HRI worked with NEI General Contracting and ICON Architecture on the $56.7 million development. Construction began in 2018, and the property was ready to welcome tenants in the summer of 2020. “We knew they were the right team,” said Carbone. “Both firms provide much-needed knowledge of Passive House and cutting-edge efficiency standards.” 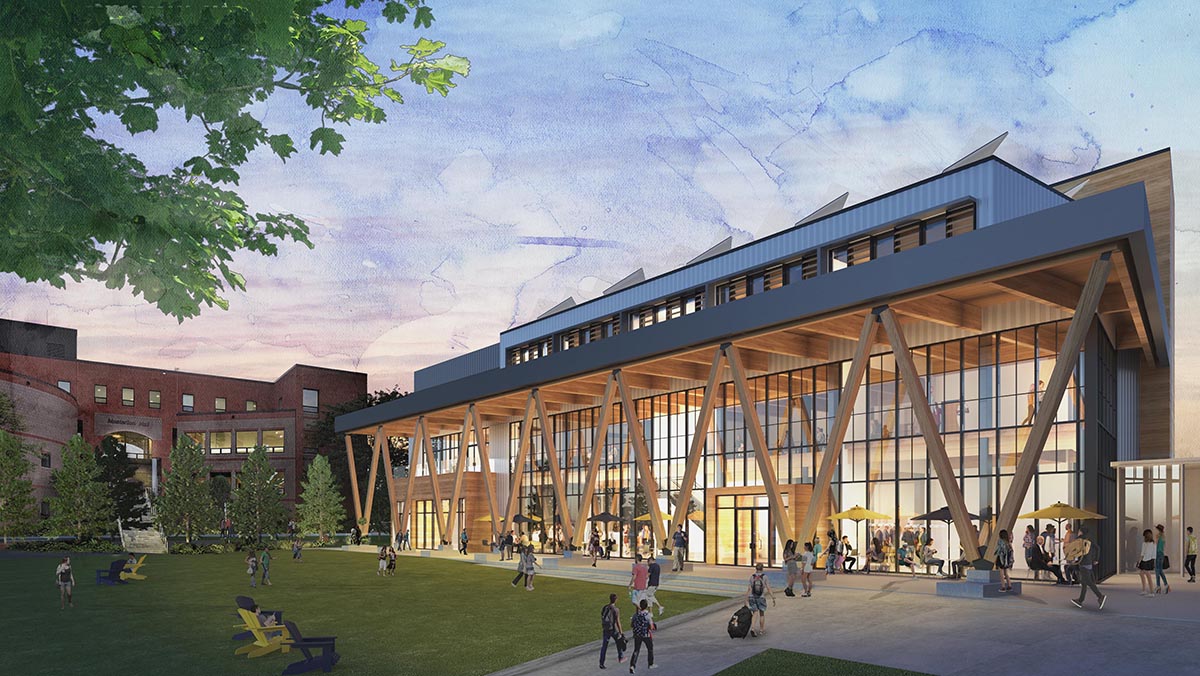 The Career and Student Success Center on the University of Southern Maine’s Portland campus has a sustainable design on the exterior, with cross-laminated timber framing and a large photovoltaic array on the roof. Designed for LEED Gold, the facility will anchor a new 1-acre greenspace with spaces for dining, career development and student connection and is adjacent to a new residence hall designed to Passive House standards. Image courtesy of Elkus Manfredi Architects

The ‘Cutting-Edge’ in Academic Buildings

The University of Southern Maine recently broke ground on the largest construction project in the school’s history—a $100 million Career & Student Success Center and the adjacent Portland Commons Residence Hall. Both projects are expected to be completed in June 2023. 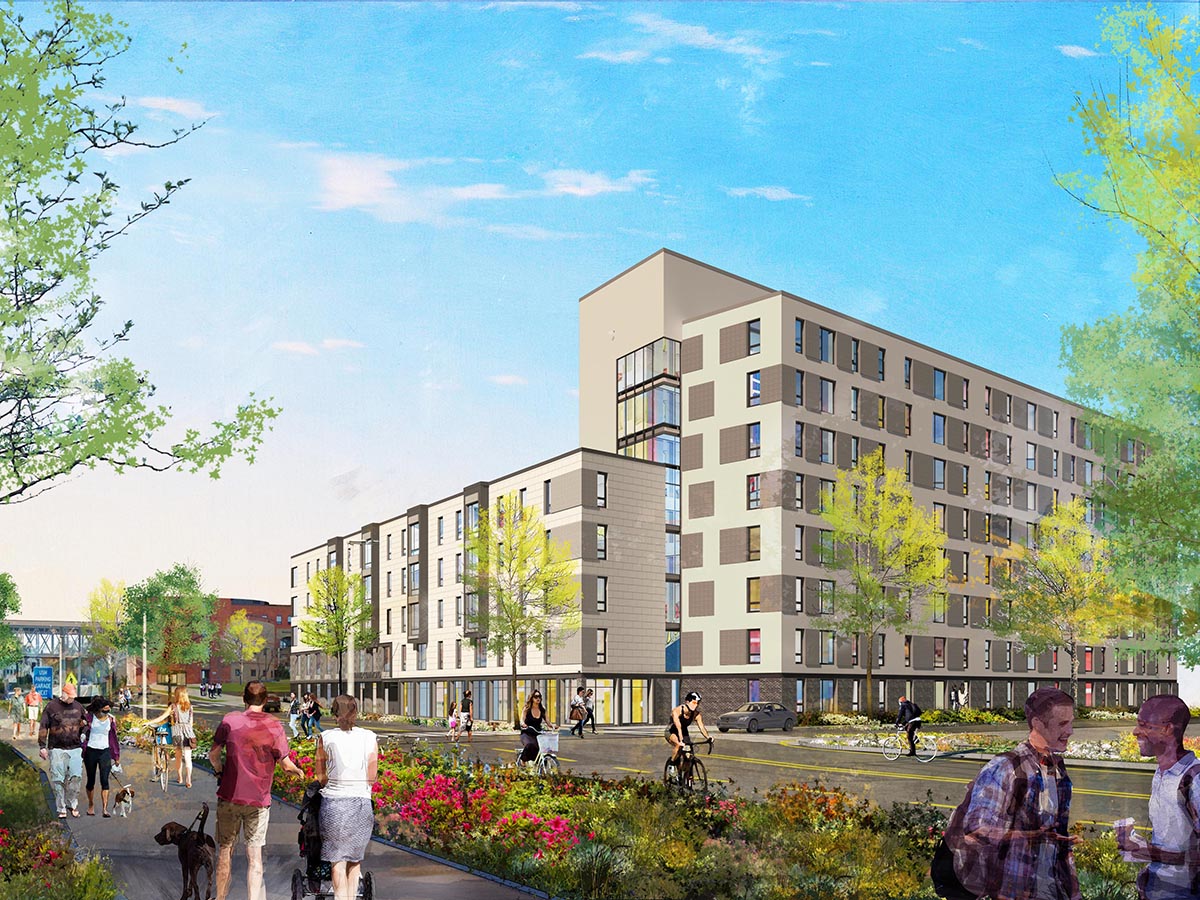 The 580-bed Portland Commons Residence Hall will be the first student housing on the University of Southern Maine’s Portland campus. Designed to Passive House certification, the 218,000-square-foot student residence is expected to use 50 percent less energy than a comparable structure built to code. Image courtesy of Elkus Manfredi Architects

The 218,000-square-foot student housing component is designed to Passive House standards and will use 50 percent less energy than a comparable structure built to code. It is the second-largest academic Passive House building and the seventh largest in the U.S. The adjacent CSSC is designed to LEED standards.

“We’ve designed a lot of buildings over the years to meet various energy-efficiency standards, but this is the highest standard we’ve ever aspired to,” said Jeff Jones, a principal of Capstone Development Partners, a national student-housing developer based in Birmingham, Ala., that specializes in on-campus, public-private partnerships. “This is cutting edge.”

The residence hall will have more insulation in the exterior envelope than a typical residential building, Jones said, and the HVAC system will be upgraded to improve indoor air quality. “There are substantial stringent installation policies, procedures and practices that we have to follow, and inspections throughout the construction process to verify that we are doing all we can to provide the energy efficiency that is the driver behind Passive House efficiency and indoor air quality,” he explained.

The residence hall will have 580 beds, a community kitchen, bike storage, laundry rooms and an outdoor courtyard. Jones said that the development team needed to balance the sustainability goal with quality and affordability to keep rents affordable for students.

“New construction is more and more expensive, particularly when you incorporate standards like Passive House,” he said. “The key to the success of this project was that everybody was committed both to the sustainability objective and also to the affordability objective and worked really hard to balance those sometimes-competing goals.” 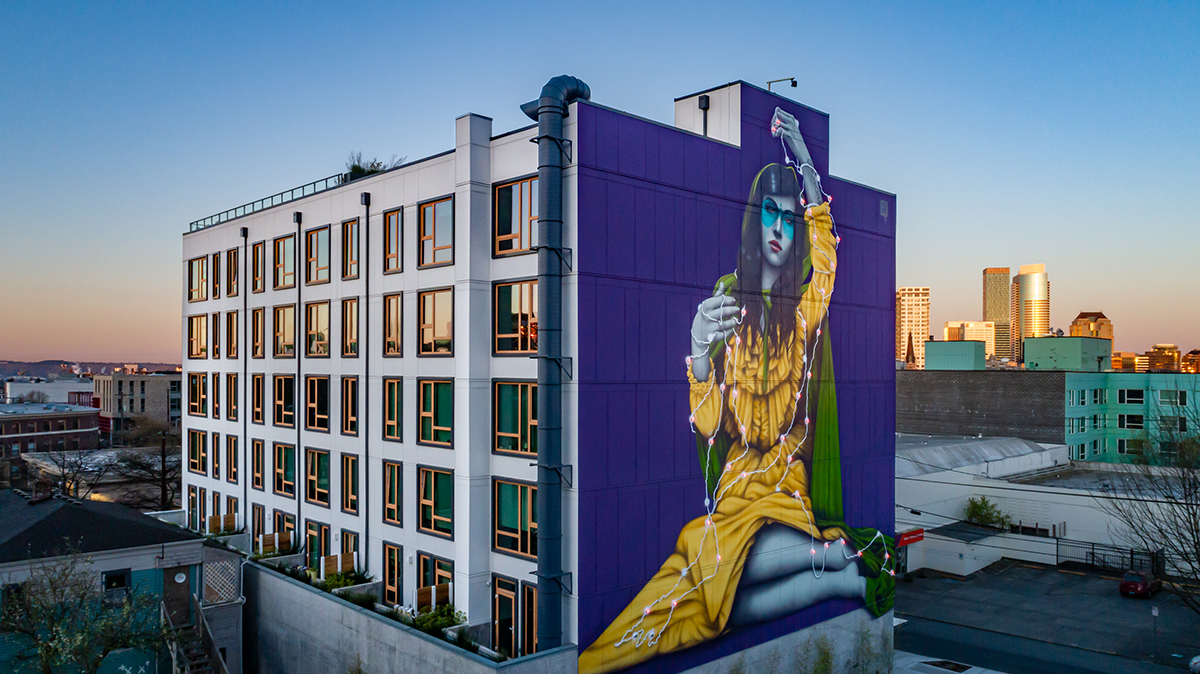 Luxury With an Emphasis on Health and Wellness 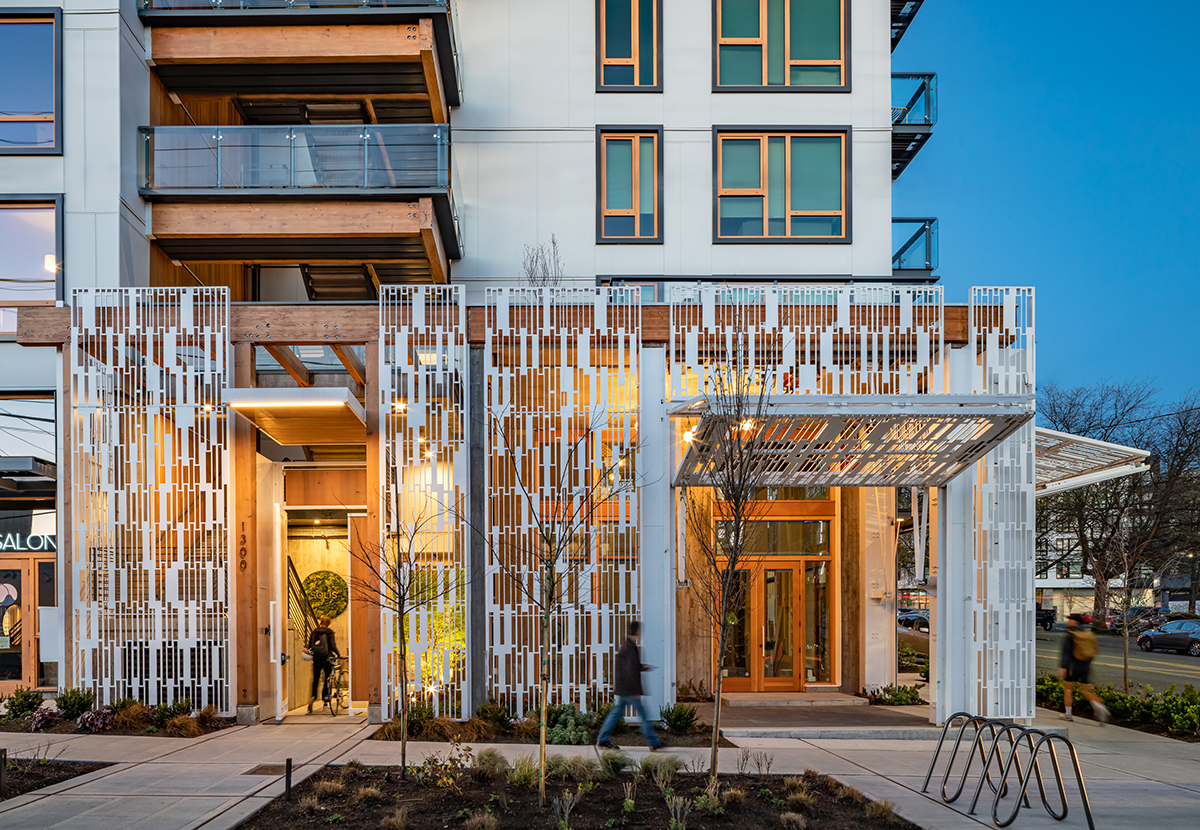 A striking, patterned screen “jewel box” completes the feature corner of the block with a boutique restaurant, while creating a one-of-a-kind residential entry gate. Image courtesy of Meghan Montgomery with Built Work Photography

“It’s a great way to not only reduce your carbon footprint but also to show the world that this is a profitable venture,” said Marc Coluccio, COO of Seattle-based SolTerra, which purchased the project for $4.5 million in 2018 and built it out for a total cost of $24.5 million.

Solis was developed by Cascade Built, a Seattle-based development and contracting firm, which sold the project but remained the general contractor. The design, which includes studios and one- and two-bedroom apartments, is based on Passive House principles to reduce energy use and operational costs and prioritize resident health and wellness. But it’s luxurious as well.

“The units have some of the nicest finishes of any apartment building I’ve ever been inside,” said Sloan Ritchie, president of Cascade Built. Interior features include engineered wood flooring, quartz countertops and modern cabinetry with matte black hardware, he added.

Common elements include a rooftop deck with views of Mount Rainier and the Seattle skyline, a fire pit and a dog run. There is ground-floor retail as well—a wine and chocolate shop, hair salon and French bakery and café.

Electric bills for the entire 45,000-square-foot building—apartments and retail—are $700 per month, he added.