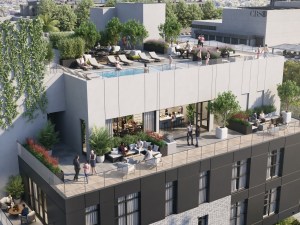 California Governor Gavin Newsom isn’t happy. His state has an acute shortage of housing and the measures local governments have submitted to address it only nibble at the margins. “… We are failing to meet the urgency of this moment,” he scolds, noting that “Everyone has to do better—cities, counties, and the state included.”

One of the measures Newsom signed into law last September may have the best potential to help solve the state’s affordable housing crunch with the least pushback from local governments and community leaders. Optimistically titled the Middle Class Housing Act, the legislation aims to create new housing units for low-income and working-class Californians by allowing new units to be built in under-used commercial sites and by streamlining the approval process.

There are other elements of the combined California Assembly (AB2011) and Senate (SB6) bills that address job creation, wage levels, and transit proximity, but its merged overarching goal is to fast-track 2 million new housing units in the golden state, where it can feel like you need to inherit or manage a gold mine to afford a home.

Prior to the bill’s passage, UrbanFootprint, a data intelligence platform, predicted the legislation “could produce 1.6 million to 2.4 million new homes, depending on market conditions, including up to 400,000 affordable units.”

How do multi-housing industry professionals see this legislation faring? Will it help break down the myriad barriers that inhibit affordable production?

“Conversions are important housing opportunities at a time when demand and property uses are evolving quickly, both at the building level and the property level,” remarked Christopher Ptomey, executive director of the Urban Land Institute’s Terwilliger Center for Housing. He sees this component of the legislation as a helpful approach to both meeting housing goals and mitigating delays and associated costs.

It will also be helpful for “overcoming public and political opposition to individual projects,” he added. (The state’s unpopular SB9, which enables homeowners to to split their single-family residential lots and build up to two housing units on each, was rebuffed by  241 cities from the League of California Cities and is likely a contributor to the underwhelming local response that Newsom complained about.)

Rob McRitchie, senior managing director in real estate and investment management in JLL’s Los Angeles office, sees the two-part legislative package as a mixed bag. “While they support new housing in areas that were otherwise off-limits by local zoning codes and allow a streamlined process (AB2011), they require you to use prevailing wages for labor, which could make most projects not feasible,” he said. “I think both bills will work great in areas that have above-average rents, which may allow you to justify higher labor costs, but I don’t expect to see this as a solution to an ever growing crisis.”

While he applauds the state legislature’s pro-housing efforts, McRitchie sees the latest measures working best in areas that can support high-rise development but is not sure it will overcome the powerful California Environmental Quality Act, which is often used to block or slow development. “We welcome new ideas that could assist in making development more streamlined, more efficient and with less regulation,” explained. “It will be important to address CEQA and its threat to development in order to ensure the ability to provide housing for all.”

Grubb Properties is another active California developer. “We are always tracking the latest policies at all levels of government,” reported Megan Watson, the firm’s director of development, who’s feeling positive about the common-sense progress coming from Sacramento. “Encouraging housing in infill areas, near transit, and with focus on affordability for the full income spectrum is exactly what we are about. We see these two bills as a major step in the right direction for the state.”

Watson sees the zoning changes to be a strength of the legislation. “Overriding existing zoning regulations in common sense areas where there is access to transit or other modalities of transportation other than the car, where there are likely job centers, given that it’s in commercial districts, and ultimately that its focus is on encouraging affordable and middle-income housing production,” she declared. “That is a tremendous feat that we’re happy to see.”

The biggest impact of the legislation, Watson expects, will be on cities surrounding the state’s three major metros: San Francisco Bay Area, Los Angeles and San Diego, which have already implemented comparable zoning practices. “What I suspect will happen is that the surrounding cities to these metros will feel the biggest impact, assuming their zoning still has commercial-only designations,” she said. “They have undersupplied housing needs that have caused unaffordability to skyrocket.”

Potentially, smaller firms will benefit from the legislation, noted Jeff Zbikowski, AIA, principal of Los Angeles-based JZA Architecture. “Historically, affordable housing has been limited to institutional developers and tax credit-seeking projects,” he commented. “However, it now makes financial sense to build these projects without the need of public funding, which is a huge benefit for the community and developers alike.”

Other real estate executives focused on the potential for the legislation to create new minority housing and development opportunities.  “We anticipate SB6 will create opportunities for minority homebuyers to come back into the cities they were displaced from due to rising costs and gentrification,” she predicted, Lydia Pope, president of the National Association of Real Estate Brokers, a professional organization focused on the needs of minority colleagues, clients and communities.

But there is a caveat. “Minority developers are critical at ensuring developments are built for the minority community and are affordable,” Pope said, noting these businesses often struggle to compete for limited tax credits.

Further, she said, the projects enabled by the legislation should advance housing equity and diversity recruitment by enabling public employees, like police, firemen and teachers, to afford to live in the communities where they work.

To ensure equity, Pope suggests the legislation include “specific language that gives priority and/or tax credit bonus points for minority developers that are located in the development’s jurisdiction, projects that have at least 25 percent minority participation at the developer’s level, developments that give purchasing priority to residents that have been displaced from the community they once lived in within seven years.”

Zbikowski is particularly pleased with the elimination of previous parking standards in the new law. “We are now able to restructure how our typical developments are laid out,” he shared. “This gives us more freedom while designing in high-density areas.” The architect does caution against property owners creating congestion issues or parking shortages in some neighborhoods.

He is glad to see the door opened for more would-be developers and landlords. “In many cases, though, admittedly not all, competition can help drive quality and encourage upkeep, which is always a concern with affordable housing,” he remarked.

“I think the burden is now upon the private developer and A+D community to think critically about what the best project might be and consider the potential downsides of the new legislation using a grass roots approach,” he added.

Watson anticipates other states adopting the same approach. “The housing shortage may be the most extreme in California, but it is a national problem,” she said. “Every market that we operate in will have to address these issues in some form or another (many have already in some fashion).” She cites New York, Washington D.C., Charlotte, Research Triangle [North Carolina], Atlanta, Denver and Dallas as housing-stressed markets.

That work is already underway at varying degrees though California is leading the way. “Several other states have taken action to address housing shortages, including Oregon, where single-family zoning was eliminated in most circumstances, and Massachusetts, where Chapter 40B streamlines permitting processes for subsidized projects affordable to lower-income residents,” he said.

McRitchie, on the other hand, is less bullish on a national expansion. “I don’t think there are any other states that have the regulation, legislation and the level of litigation quite like California,” he commented.

The potential benefits of the Middle Class Housing Act’s inclusion of unused commercial land for residential use include removing blighted properties, reviving downtown areas, increasing the local tax base and even possibly having developers clean  sites with pollution issues if the financial incentives support this.

“Recent California legislation should be helpful in addressing the state’s housing crisis, though the scale of the challenge requires a broad complement of strategies and investments.”

This is likely true for all 50 states.