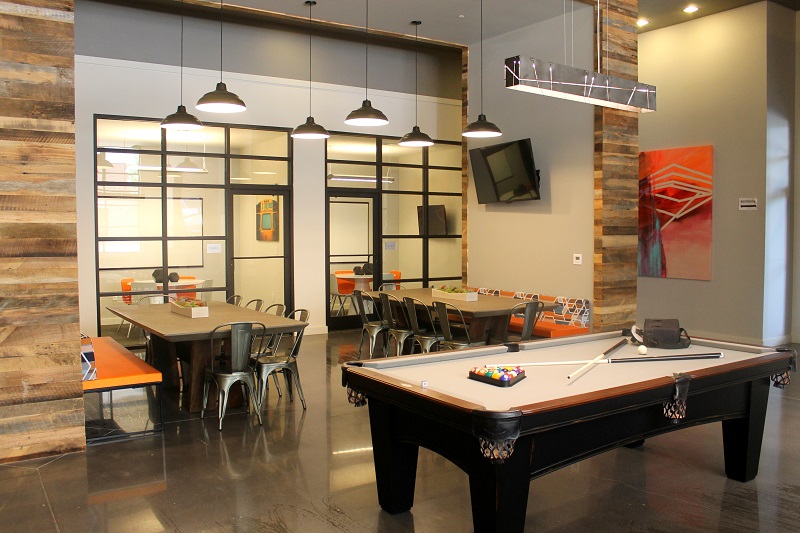 The entertainment area at The Knox includes a pool table, dining areas and a lounge area with a flat-screen TV

Knoxville, Tenn.—Campus Advantage and Pinecrest Partners have completed construction of The Knox, a 382-bed, 101-unit student housing community within walking distance of The University of Tennesee, Knoxville campus. Residents can start moving in August 13, with some early move-ins scheduled for the first week of August.

When MHN spoke to Campus Advantage President & CEO Mike Peter last March as the partnership began development of the community, he said the property’s appeal was its “obvious superior location.” He added that the location is just minutes from the university’s stadium, student center and the student-focused retail.

Also,” there was limited purpose-built student housing within walking distance of the university,” Christy Shorter, vice president of operations at Campus Advantage, told MHN. “The Knox offers a complete high-end living experience. UTK was a natural choice given macro market factors and an underserved market.”

Campus Advantage paid $3.4 million for the almost 1.7-acre site in January 2015 and the project cost $17 million to construct, the Knoxville News Sentinel reported. This is the first property the company owns in Tennessee, with its other 40-plus owned properties located mainly in Florida (six properties), Texas (six) and North Carolina (five).