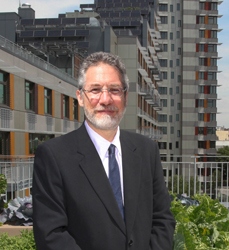 There are other developers interested in making affordable housing better, but Jonathan F.P. Rose has emerged as a true thought leader of this transformative movement. Vice Chair of Enterprise Community Partners, Rose’s business, public policy and not-for-profit work all focus on creating a more environmentally, socially and economically resilient world.

In 1989, Rose founded Jonathan Rose Companies LLC, a multi-disciplinary real estate development, planning, and investment firm which has successfully completed more than $1.5 billion of work. The company’s mission is to repair the fabric of communities. And, in 2005, the firm launched the nation’s first green transit-oriented acquisition and redevelopment fund, followed by green affordable housing and office transformation funds.

Rose’s work has been featured by CNN and The New York Times, and he was profiled by PBS for its series on sustainable development. His book on resilient cities, The Well Tempered City, will be published by Harper Collins in 2015. MHN Editorial Director Diana Mosher recently interviewed him about developing healthy and affordable mixed-use projects.

What are you working on now?

A project we just completed that’s a really good example of our work is Paseo Verde in Philadelphia. It’s literally touching the North Philly train station. All of our work is transit accessible. Paseo Verde is next to a major transit hub which is great. It’s in a low income neighborhood adjacent to Temple University. Temple is rapidly growing, illustrating a trend we’re seeing all across the United States which is the rapid growth of urban universities. They’re becoming the stabilizing or transforming forces in their communities. There’s been a shift away from urban universities being very inward looking. In the 21st century they’ve become much more outward-looking and connected to their neighborhoods. And that actually creates housing opportunities for developers, both in student housing and housing in general. This Paseo Verde project is a mixed-income development with about half affordable units and half market rate. It’s serving the Temple University population on the market-rate side, and the local community on the affordable side—and serving, really, as a bridge in that neighborhood.

Paseo Verde is extremely green. It’s not only a LEED Platinum building, but also it’s the first LEED Platinum Neighborhood design project in the United States. It has a lot of green features on the energy conservation side—using recycled materials and non-toxics—and Philadelphia has a big effort under way to reduce its storm water runoff. This is one of the first projects in the country that actually stores three inches of storm water around the roof.

The other thing we’ve been really focusing on in all of our projects is the health benefits of green buildings. Healthy buildings are very important for affordable housing in lower-income communities because health issues affect low-income people particularly, but it’s also a focus on the market-rate side because green building and healthy environments are very appealing to market-rate customers also.

A lot of green innovation seems to be coming out of affordable housing projects. Why are we seeing this trend across the country?

Nationally the greening of affordable housing has been led by a not-for-profit, Enterprise Community Partners. I happen to be on their board, and I helped them create this green initiative. About 10 years ago, Enterprise realized there were enormous economic, environmental and health benefits from green buildings. So, they wrote a green guideline called the Enterprise Green Community Guideline which is designed specifically for affordable, multifamily housing. It was more suited to multifamily than many of the LEED guidelines at the time.

Enterprise then worked with the cities so that now many cities such as Washington, D.C., New York, San Francisco that require affordable housing require that those they fund will be built to the Enterprise Green Community Guidelines. Enterprise also worked at the state level. In many parts of the country now, affordable housing development must be green. Enterprise has done a great deal to support that. They give out grants to help both for-profit and not-for-profit developers hire consultants to learn how to be green and get technical assistance. They’ve also done over a billion dollars worth of financing to help finance green building. And, they also did a cost study which shows that following their green guidelines only costs—depending on the building and the location—between zero and two percent more, which is not much on the capital costs side.

One of the things we’ve learned, by the way, is the most cost-effective green technology is insulation. One of the things we do with all our buildings is, after the facades are done, we go out with an infrared camera and scan them to see whether there are gaps in insulation or air leaks. It doesn’t cost any more and it leads to better, greener buildings. So we’ve learned from the affordable housing world a few simple and cost-effective technologies that can be applied to any building.

What are your thoughts about solar power and wind energy?

We put wind power on the roof of a building called Silver Gardens in Albuquerque. It was  a very long, laborious and difficult process, and I wouldn’t recommend it for individual buildings. I’m not sure it’s really cost effective and you’re very dependent on the variability of the wind. There are also a lot of structural requirements. I’m sure there are cases where it makes sense, but in general I don’t think it makes sense.

In terms of solar, the cost is continuously dropping. Until recently the use of solar was really dependent on the availability of federal tax credit incentives. Those certainly are important, but as the cost of solar continues to drop, it’s becoming pretty equal to the regular cost of power. One of the great things about solar is that if a developer doesn’t have the money to put solar into the budget, there are more and more companies happy to pay for it and then lease the solar to you at a fixed price which means that you can lock in your price of electricity today. In 20 years, when electricity costs have gone up, you’ll be paying a much lower price.

In every building we focus on sun shading, insulation, caulking and getting the most efficient boilers, etc. And then we’ll add solar if, in that particular market and those particular costs, it’s cost effective. So it’s something we look at in every case, but not something we do in every case.

What’s next for your company?

We’ve been talking today about multifamily, but a lot of our projects are mixed-use and so, for example, Paseo Verde in addition to having affordable and market-rate housing has a community health center, some social services office space, a pharmacy, and we’re in discussions to lease some retail space to a café. That’s a fairly typical mix for us and our buildings.

Next for us is to deepen our work on the health side. We have a wonderful project in Denver called Aria which is a partnership with two developers Sue Powers and Jerry Glick. Aria is focused on taking healthy living to the next level. We think it will be a LEED Platinum, and it will have an affordable housing component, a townhouse component, community gardens and a relationship with the Colorado Health Foundation. It will be full-spectrum healthy living.

It’s an amazing site. Again, it’s right across the street from Regis University, so that’s a theme we see emerging more and more in our work. Universities make great partners. They have the demographic in terms of population that we’re trying to capture, but also we’ve been more and more wanting to partner with universities that do research; trying to develop evidence for what are the best practices in energy efficiency. Another trend we’re focusing on is behavior—how do we shift resident behavior to be greener which saves energy and builds community.

Our company is also increasingly transitioning to mixed-income projects. Interestingly, affordable housing has a lot of challenges in that you have very complicated financing to put together, but there are no marketing issues; it’s usually very easy to lease the units. Market-rate development requires a much more astute sense of the market and amenities, and you’ve really got to design to compete. So that’s a skill that we have to integrate into our projects. And we’re growing our amenity packages, focusing on beautiful green gardens and green roofs, exercise amenities, and amenities that promote healthy live social networks [since] a sense of community actually enhances people’s sense of wellbeing.

Another thing we’re focusing on, since we believe in affordable housing, as we move into market rate, is the micro unit. The smaller, more affordable but unsubsidized unit. Our philosophy is that the micro unit should come with a macro community- in terms of shared social amenities.

Are you keeping an eye on what’s happening in other parts of the world? Any trends in particular?

Yes, what I’m finding interesting is the community redevelopment happening in South America. In Brazil, Chile and Columbia as the middle class is growing, you’re seeing the traditional slums being upgraded and all kinds of interesting new ideas for housing the emerging lower middle class. One idea that comes out of Chile is called “Elemental.” It provides people with a basic core that’s a living room, dining room, kitchen and bathroom, but its structure is designed so over time people can add more and more rooms vertically. As they make more money, they can add another room to their house. This has been done in the past horizontally, but now we’re seeing it done vertically. It’s not so much a model for the U.S., but it’s an important model for the rest of the developing world.