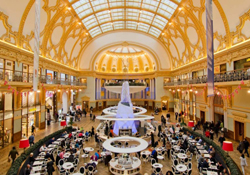 London, United Kingdom & Gouda, The Netherlands—U.S. private equity giant Blackstone has completed the takeover of Netherlands-based Multi Corporation, an owner, manager and (re)developer of high quality shopping centers across Europe. The transaction ranks as one the largest acquisitions of distressed commercial property in Europe since the onset of the credit crisis.

Multi currently owns or manages 56 malls in 13 European countries, including Turkey where it is the largest owner and manager of shopping centers. More than 330 million visitors spend an estimated 3.2 billion euro (about $4.35 billion) annually in Multi’s more than 5,200 stores, restaurants and attractions.

Blackstone has been working on the takeover of the Dutch developer for more than a year. In August Bloomberg reported that in preparation of Multi’s acquisition, Blackstone had amassed more than 90 percent of the developer’s 900 million euro ($1.2 billion) of corporate debt and a similar share of its equity. The private equity group won the approval of the European Commission and Turkish antitrust authorities to move forward with the purchase in late July.

“We are excited to welcome the Multi team into the Blackstone family. Our acquisition has significantly strengthened Multi’s financial position, and its portfolio includes some of the highest quality retail real estate in Europe. The Multi team has an outstanding track record of bringing retail centers to life and has achieved excellent results in creating spaces that make it exciting to shop, attracting both consumers and the world’s most desirable retailers. Blackstone and Multi together look forward to future growth and expansion opportunities in European retail,” Ken Caplan, head of European Real Estate at Blackstone, says.

“We are delighted to become part of Blackstone, whose position in the real estate market gives Multi the opportunity to progress its success story. Blackstone is one of the world’s premier real estate investors, focused on creating value through hands-on management and targeted investment,” adds Dick van Well, Multi’s chairman of the Management Board.

Since 1982, Multi’s projects, which regularly act as the engine for revitalizing a city or region, have received accolades for their innovative nature, architectural quality, sustainability and profound sensitivity to local environments.

Blackstone’s recent purchases in Europe include the acquisition of the Franciacorta Outlet Village in the province of Brescia in Italy. Aberdeen Asset Management sold the property for €126 million (approximately $171 million).