Over the last six months, the average rent for an apartment has decreased by 4 percent or about $40 to an average of $961 per month

Pittsburgh–Over the last six months, the average rent for an apartment has decreased by 4 percent or about $40 to an average of $961 per month, according to RentJungle, a website that like Google crawls all over the web for every apartment listing and then organizes it on a results page.

The site has a unique set of data from which it draws these results. “We launched the site in May 2009 and have since observed over 8 million unique advertisements for apartments. We have this data saved in our systems and thought why not make use of it,” Jon Pastor, CEO of RenJungle, tells MHN.

“Despite these decreases, we are seeing some encouraging signs in the rental market,” says Pastor. “Looking at just January this year, rent nationwide is up 1 percent over December, which is a reversal in the overall six-month trend.”

Rentjungle.com co-founder Rick Ferris, says, “Difficulties in the real estate market didn’t push as many people into apartments as the industry would have expected. Increases in families renting instead of buying were offset by existing renters taking on roommates or moving back with parents.”

The trend for 2010 cannot be predicted yet. “I have only looked at the January numbers so it’s hard to say if rents are going up in 2010, but if you compare it to December, you could say they have gone up,” Pastor explains. 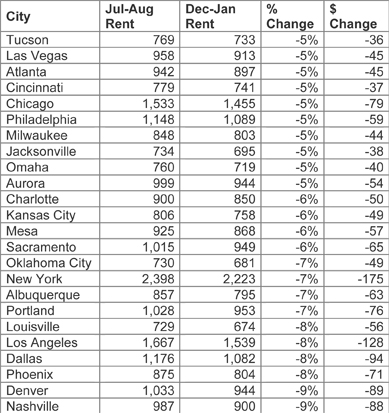