The apartment sector might well be on the path to recovery 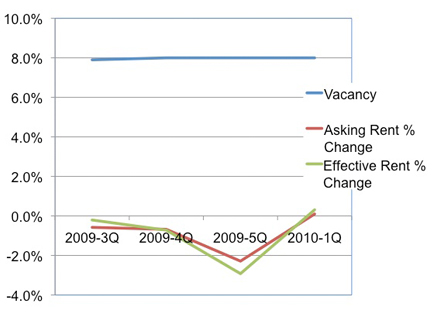 New York–The apartment sector might well be on the path to recovery. Well, in quite a few markets, anyway. National vacancies remained flat and net absorption was surprisingly strong in the first quarter of 2010, according to the latest report by Reis Inc.

“In addition, both asking and effective rents posted positive gains, the first time that we’ve recorded an increase after five quarters of record declines,” Kyle O. McLaughlin, senior analyst at the economics department of Reis Inc., tells MHN. “Although one quarter’s results shouldn’t be extrapolated into a trend, this quarter may indeed mark the turning point for recovery in the apartment sector. This is consistent with our outlook that rental apartments will recover first (versus office, retail and other commercial sectors), as the economy and labor markets emerge from the recession,” McLaughlin explains.

Reis Research Director, Dr Victor Calanog, explains, “The faster pace of effective rent increases versus asking rents imply that concession packages are no longer increasing and may in fact be tightening.”

For the quarter, effective rents rose in 60 out of 79 markets tracked by Reis, with 10 markets, including Miami, Ventura County, Tucson, Memphis and Houston, seeing a gain of at least 1 percent.

“We remain of the belief that this is going to be a slow recovery. Although first quarter results were uncommonly robust, it does not mean every single measure of performance was positive. Newly completed properties came online more than half-empty: over 22,000 units of new apartment buildings opened their doors in the first quarter at an average vacancy rate of 52.8%,” says Dr Victor Calanog.

Vacancy levels rose in 30 out of 79 markets, even if national vacancies remained flat.

Similarly, the outlook for SoCal apartment markets is mixed this year with rents declining up to 3.5 percent in Los Angeles and Orange counties, staying flat in Riverside and San Bernardino Counties, but inching upwards thanks to a better employment outlook in San Diego County, according to the latest Casden Real Estate Economics Forecast from the University of Southern California (USC) Lusk Center for Real Estate.

“Overall, Southern California will not see sustained increases in rents until the greater economic health of the region improves, but renters in San Diego may experience the kind of slight increase that comes when jobs return and housing is still too costly for renters to become buyers,” says Tracey Seslen, Ph.D., co-author of this year’s Casden Multifamily Market Forecast. The future health of the Southern California multifamily market continues to be shaped by jobs, housing prices, the “shadow” market of rental homes and condos, and new construction, Seslen explains.