Brunswick Estates is getting a major renovation. 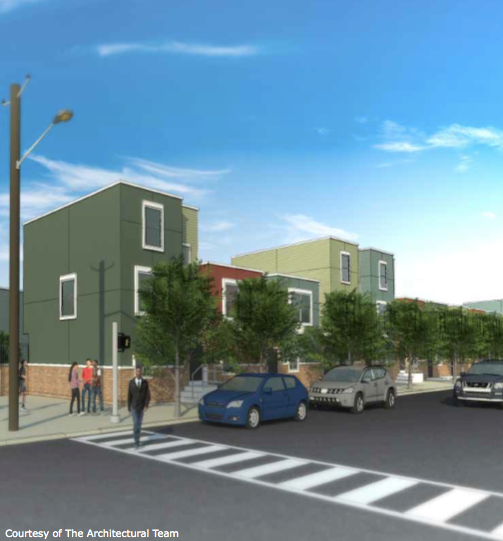 Jersey City, N.J.—The Architectural Team has been announced as the architect for a major renovation of a 14-building, 131-unit affordable housing community called Brunswick Estates in Jersey City, N.J.

Part of a critical new initiative to expand affordable housing options in Jersey City by its mayor Steven M. Fulop, the renovation will address a more than three-decade-old community designed by acclaimed architect Don M. Hisaka.

The groundbreaking was held recently and was attended by Mayor Fulop, the architects and the development team.

Built in 1984, Brunswick Estates no longer meets today’s building code standards, has deteriorated from years of use and suffered damage during Hurricane Sandy.

“The exterior’s outdated and declining appearance will be revamped to provide a more inviting outward impression, juxtaposed to the immense amount of hardscape currently adjacent to the structure and in the surrounding neighborhood,” he said. “One the biggest challenges in updating the exterior lies in replacing the windows while keeping the exterior clapboard and stucco.”

The goal is to reimagine the buildings such that they can be successfully improved to meet the dynamic needs of the residents, and provide a positive and transformative asset to the community, Podesky said. “In order to provide residents with quality, affordable housing, the campus requires modernization and a reassessment of the residents’ needs. The stark appearance of the development’s exterior will be improved by increasing the planting areas and green space, eliminating and consolidating existing walkways and hardscape and repainting all buildings with an updated and more lively color palette. In order to keep the existing exterior materials, the windows will be removed in a manner that doesn’t disturb the surrounding structure and siding. The new windows will have a frame that accommodates the existing conditions post-removal and will be sized properly to avoid large gaps and possible air and water infiltration. The community building, which is currently a corduroy concrete façade, will be re-cladded for a more inviting and residential appearance. Additionally, improvements will be made to interior finishes. Energy efficient upgrades will be made throughout the 137,600-square-foot campus.”

The upgrades, Podesky added, will include replacement of existing windows with new energy-efficient windows; installation of Energy Star rated appliances, lighting and equipment; implementation of low-flow plumbing fixtures; and altering of accessible units to comply with current ADA codes.