The latest financing from this debt fund was provided to HHHunt Corp. for a luxury acquisition. 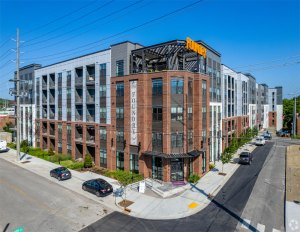 HHHunt acquired the property, previously known as Alta Foundry, at 640 21st Ave. N. in Nashville’s Medical District from Wood Partners for $86.6 million in a deal brokered by Newmark. The five-story property is nearly 80 percent occupied. The asset, which has a mix of studios, one- and two-bedroom floorplans, is located about 2 miles from downtown Nashville.

The three-year loan has options for two single-year extensions. It was issued through ACRE’s debt fund, ACRE Credit I, which has raised $509 million of equity and has closed and committed to providing more than $2 billion in loans across more than 50 transactions. Roger Edwards of JLL served as broker for the deal.

The fund supports the acquisition, lease-up, redevelopment and recapitalization of multifamily assets in growing secondary markets across the United States such as Nashville; Miami and Orlando, Fla.; Denver; Dallas; Durham, N.C.; and Charleston, S.C.

In June, ACRE finalized a $58.5 million bridge loan through ACRE Credit I with Passive Investing toward the purchase of Braxton Music City, a 236-unit luxury multifamily community in Nashville. The three-year agreement also includes options for two single-year extensions. It was the second loan issued to Passive Investing since ACRE Credit I’s launch in August 2020. The first was a $15.3 million loan for a property in North Carolina.

Sam Browne, vice president of ACRE, said in a prepared statement Nashville has proven to be a resilient market that continues to perform well in terms of occupancy levels and new product delivery.

The Nashville multifamily market has maintained a solid performance this year, with total sales volume surpassing $2.2 billion through July, according to a recent Yardi Matrix report. The metro’s construction pipeline also remained robust—20,070 units were underway as of this summer.

In October, ACRE closed a $52.7 million loan from ACRE Credit I to a joint venture between Graycliff Capital Partners and Buligo Capital Partners for the purchase of Johnstown Plaza, a newly built, 252-unit, Class A multifamily property in Johnstown, Colo. The joint venture had previously received a $29.5 million loan from ACRE Credit I in December 2021 for acquisition of Retreat at Weatherville in Weatherville, N.C.

During the summer, StepStone Group, a global private markets investment solutions and advisory firm, invested $300 million as part of a of a multi-pronged capital commitment to ACRE in a new strategic partnership that includes a portfolio recapitalization and plans to invest in multifamily properties across the U.S. The commitment from StepStone, a leading pension fund allocator and one of the world’s largest institutional consultancies, was broad-based and underpinned by recapitalization of a 1,500-unit multifamily portfolio from an earlier ACRE fund. It also included a joint venture focused on multifamily development opportunities across the risk spectrum, such as value-add acquisitions, lease-up and ground-up development across the Sun Belt, Midwest and Texas, and a primary fund investment.