Los Angeles, San Francisco and San Diego hold the top spots for LEED-certified multifamily properties in California through the past 12 months.

Green building is no longer a novelty. USGBC’s Leadership in Energy and Environmental Design rating system has been around for more than two decades and is globally recognized as a symbol of sustainability achievement. While LEED certification positively impacts the health and well-being of people, as well as the planet, it’s a valuable feature for investors, as it translates to faster lease-up rates and higher resale value.

In the U.S., California holds the top position among the states with the largest number of multifamily properties that earned a LEED certification. Using Yardi Matrix data, we’ve detailed a few notable projects that were completed in the past 12 months and hold or are pursuing such certification. The list only features communities with at least 50 multifamily units, in reverse chronological order according to their listed completion date. 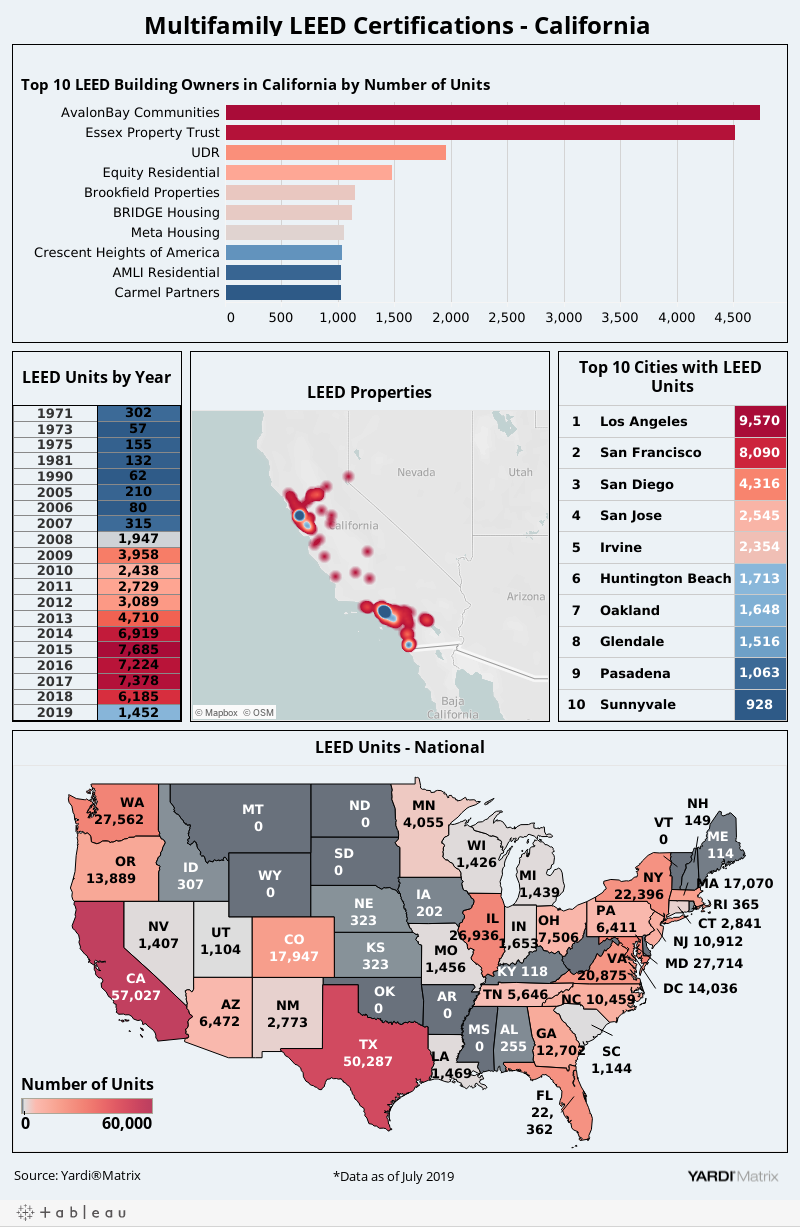 Occupying less than an acre at 1607 North Hobart Blvd. in L.A.’s East Hollywood submarket, Coronel Apartments is a fully affordable 54-unit community, available to households earning at or below 60 percent of the area’s median income; of these, six units are reserved for extremely low-income households earning at or below 30 percent of AMI. The unit mix comprises one- to three-bedroom floorplans with high ceilings and private balconies/patios.

Coronel Apartments is a perfect example of urban infill practice—Killefer Flammang Architects incorporated an existing 1920s pueblo-style house into the design, completely renovated to provide two housing units. Behind it, two four-story new construction apartment buildings add the remaining 52 units. HCHC and KFA have integrated into the community an array of sustainable features including solar thermal water heating, drought-tolerant landscaping and energy-efficient lighting and appliances. The project is also within walking distance of a number of public transportation options which will help it achieve the LEED Platinum certification it is pursuing.

Spread across more than 3 acres at 22744 Eastpark Drive in Yorba Linda, Calif, this National Community Renaissance asset is also fully affordable, catering to households making 30 to 60 percent of AMI. The 54-unit project is the second phase of the bigger Oakcrest development, which opened its first phase—Oakcrest Terrace—in 2017. Both properties earned LEED Platinum certification in December 2018 with a score of 91 points.

Oakcrest Heights was built with financial support from nine different lenders, including Citibank, the National Community Renaissance of California and Redevelopment Agency of the City of Yorba Linda. The financing of this project was complicated when National CORE’s private-sector partner pulled out of the deal in 2017. Combined, the development received more than $43 million in construction loans.

The 104-unit fully affordable community in Camarillo, Calif. is reserved for seniors. It is spread across more than 4 acres at 551 Camino Tierra Santa Camarillo and was LEED designed to begin with. A $17 million construction loan from Citibank was originated by California Public Finance Authority.

The property was LEED Gold certified in June 2019 with a score of 78 points. To earn the green certification, Springville Senior had 75 percent of construction waste diverted from landfill and used low-emitting VOC paint, carpets, adhesives and sealants. It is equipped with Energy Star appliances and low-flow, water-saving fixtures, which lower water consumption by 30 percent. In addition, the community has enhanced insulation and energy-efficient low-E windows, as well as an enhanced air filtration system.

Equity Residential’s 449-unit at 855 Brannan St. in San Francisco holds a LEED Platinum certification with a score of 92.5 points. Designed by David Baker Architects, the property is centered on a large courtyard with a redwood grove in its center. Two landscaped public mid-block passages break up the large scale and create connections, while the frontage offers access to 16,000 square feet of neighborhood-serving retail. The architect used facades with weathering and galvanized steel to reference the industrial history of the area. Wood was salvaged and restored from the site’s previous use, a former train depot.

The unit mix consists of studios, live-work apartments and one- to three-bedroom floorplans ranging from 466 to 1,450 square feet. The development comprises an affordable component, with 55 units reserved for lower-income households.