According to the company's first Senior Housing Investor Survey and Trend Report, the sector is expected to have a steady occupancy rate and increases in rent growth.

Senior housing is growing strong with investment interest, according to JLL’s inaugural Senior Housing Investor Survey and Trend Report, with the first wave of Baby Boomers hitting age 72 and more than 10,000 a day turning 65. The survey included around 250 participants who specialize in senior housing and care space, including 28 percent operators, 23 percent developers and 19 percent lenders. 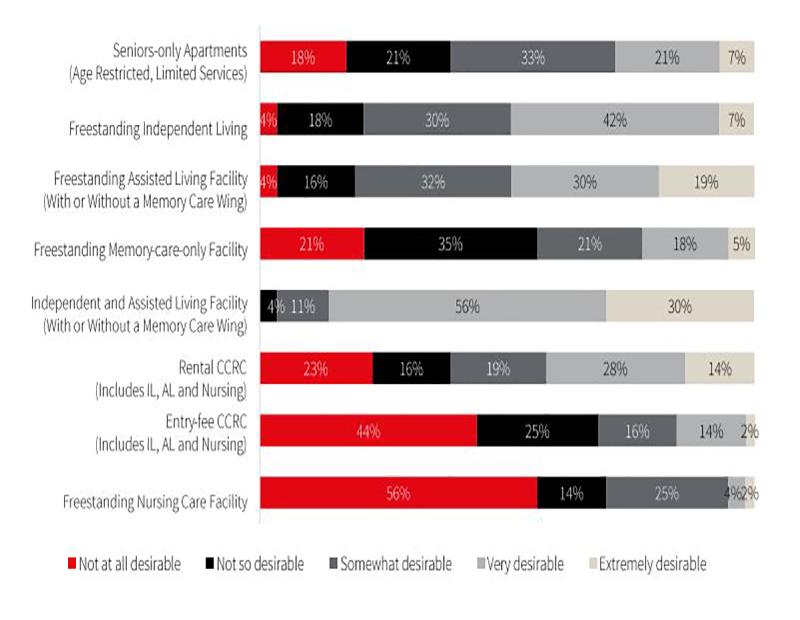 Occupancy for the senior housing sector reached 88.8 percent at the end of 2017, a slight decrease from the previous year, although higher than its cyclical low of 87 percent in the first quarter of 2010. Senior housing ranks third among 24 commercial and multifamily subsectors for best investment and development prospects in 2018, also ranking first among seven residential property types.

Demand is growing, but the increase in new supply may create some challenges for occupancy in 2018. Out of the total respondents, 30 percent said that the independent and assisted living facilities would be most favorable, while 56 percent ranked nursing care investment as the least desirable for the sector. Although seen as equally favorable by survey participants, the occupancy rate of assisted living facilities has fallen by 220 basis points to 86.5 percent, while the rate for independent living properties rose by 190 basis points to 90.6 percent in 2017.

At the end of 2016, rent growth hit a cyclical high of 3.7 percent, but decelerated by the four quarter of 2017. Year-over-year growth was a 2.6 percent, staying in line with the average senior housing growth pace since 2006. Despite new supply coming online for 2018, most respondents anticipate a rise in rents over the next 12 months, with independent living, assisted living and memory care having the greatest increase in revenue. On the other hand, participants noted that skilled nursing facilities will have the lowest amount of revenue growth, with expenses set to grow twice the average rate.

Transaction volume for senior housing was expected to slow in 2017 to $14.1 billion, with a weak fourth quarter in deals closed. Overall, the number of transactions dropped by 17 percent, despite several large portfolio deals, which in recent years accounted for 20 percent of overall closed transactions. Private equity and institutional investors from the United States and around the world have been focused on senior housing properties, noted the report, but this was balanced out by a deceleration of acquisitions by senior housing REITs. 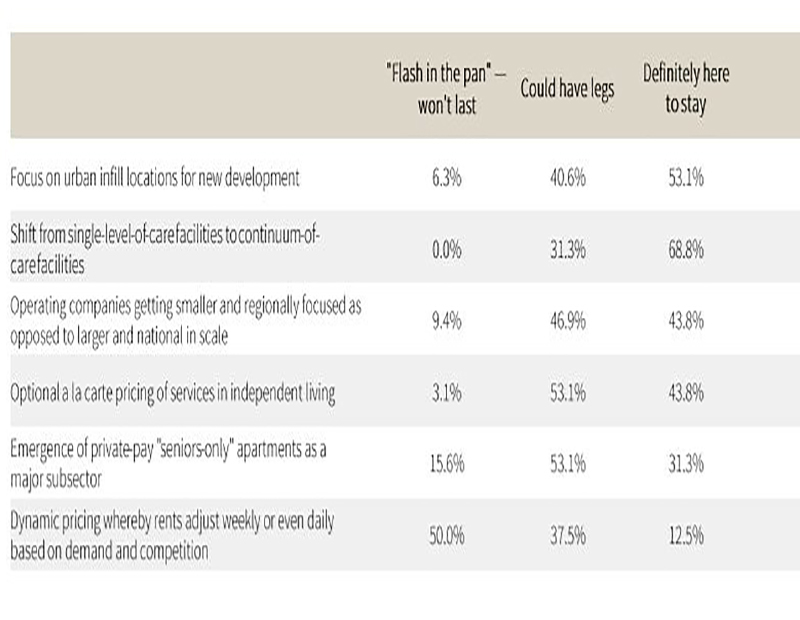 When asked about the greatest risk factors within senior housing, 56 percent of participants said difficulties in attracting and retaining qualified staff within a community and 53 percent noted rising labor costs for facility staff. Following that was overbuilding and market saturation at 44 percent, which comes off the heels of 2017 ending with a slower pace in construction starts for both independent and assisted living. Since 2014, the report shows that 79,000 units were added to inventory mostly in major markets, with one-third of those occurring in the eight metro areas of Dallas, Chicago, Houston, Atlanta, Minneapolis, Boston, Phoenix and New York. Among the topics not a risk to senior housing were difficulty obtaining equity and debt, as well as increased interest rates.

With risk taking comes new trends, and there are several being focused on in the senior housing sector. Respondents are most positive about the staying power of shifting from single-level-of-care facilities to continuum-of-care facilities at 68.8 percent and the focus on urban infill locations for new development at 53.1 percent. The trend most likely to fade, according to the report, is dynamic pricing in communities, which is where rents are adjusted weekly or daily based on demand and competition. Half of participants see that as a trend in senior housing that won’t last.