Wood Partners has broken ground on a 281-unit apartment community in the Pearl District of Portland, Ore. 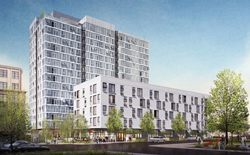 The development, designed by Boora Architects, will include two buildings: a 63-unit, five-story low rise and a 218-unit, 16-story high rise. Residents of the buildings will have access to a rooftop deck with views of Mount Hood, two clubhouses and a ground-floor plaza. Anderson Construction is the general contractor.

The building site is bound on the north edge by Pettygrove Ave., a designated “green” street intended to connect Fields Park to green spaces west of the neighborhood. Portland’s two streetcar lines connect the site with downtown Portland and the South Waterfront. The low rise will be completed by the second quarter of 2015 and the high rise by year-end 2015, according to Wood Partners.

“Since Portland has higher than average barriers-to-entry, and since many firms don’t have feet on the ground, we decided to strategically partner with members of Hoyt Street Partners [on the project],” Wood Partners vice president of development for the Northwest region Steve Yoon tells MHN. “Hoyt understands the ins and outs of the market extremely well.”

In the early 20th century, the Pearl District was a major Portland industrial and transportation hub, featuring rail yards, warehouses and factories. By the 1950s, many industrial activities had relocated elsewhere as transportation patterns shifted from water and rail to road and air transit. Artists and small businesses took advantage of the low rents of the post-industrial era.

The Pearl District as is exists now began in the early 1980s, with efforts to convert warehouses and rail yards into mixed-use development. The district’s redevelopment gained even more momentum in the 1990s, as multifamily residential buildings, offices, and a range of retail shops were developed. The district has a Walk Score of 97 out of 100, making it a “walker’s paradise.”