Work has started on 12th & Olive, a mixed-use development in the southern section of downtown Los Angeles (also called the South Park neighborhood). 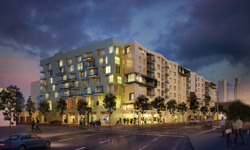 Los Angeles—Work has started on 12th & Olive, a mixed-use development in the southern section of downtown Los Angeles (also called the South Park neighborhood). The property is being developed by the Wolff Co. and designed by L.A.-based TCA Architects, with completion slated for mid-2016.

The development will include 293 apartment units, as well as about 17,300 square feet of retail space on the ground floor. There will also be 7,000 square feet of amenity space. The building will feature 24/7 on-site valet and concierge services.

The southern section of downtown L.A. has seen considerable infill development since the early 2000s, after spending decades as an industrial area. These days the neighborhood is known as home to the L.A. Convention Center, the Grammy Museum and Staples Center, among other facilities; it’s also the location of the first condo developments in California to win LEED Gold, the Luma and Elleven residences (in 2007).

Overall, demand for apartments is strong in greater L.A., with an estimated 94,900 jobs being created this year in the metro area, compared with 74,800 in 2013. According to investment specialist Marcus & Millichap, L.A. apartment vacancies will end the year at 4.3 percent, up from 3.9 percent at the end of last year. The company also forecasts that average effective rents will rise 1.2 percent this year.

The developer of 12th & Olive tapped Bernards as the project GC. Bernards is a specialist in urban residential construction, having recently completed a mixed-use project at Wilshire Blvd. and La Brea Ave. in LA. It’s currently at work on One Santa Fe, a TOD in the downtown LA Arts District.