What Do you Know About Social Media?

The key to social media is to have a strategy

New York–When Paragon Properties, operator of more than 5,800 apartment units throughout Michigan, decided to go to a social media expert, traffic to their website was well below average and physical traffic was dwindling in the midst of the worst economy the state has seen in decades. And while many managers may have buckled under pressure, Paragon decided to do something different to draw renters to their communities.

“Social media was very important to us which is why we went to the experts,” Justin Dunckel, vice president of Paragon Properties, tells MHN. About a year ago, Paragon hired The Urbane Way, a company that does social media consulting exclusively for multifamily communities. Since the campaign launched, visits to Paragon’s Web site have increased 161 percent. In that time period, Paragon has also seen a 10 percent increase in physical traffic, an 8 to 10 percent increase in resident retention. The company has also managed to reduce expenses.

The campaign, which is being led by Eric Brown, founder of The Urbane Way, included enhancement of the site from an SEO (Search Engine Optimization) standpoint, creation of a resident portal/social site (Paragon Patio) and blog, as well as Facebook and Twitter profiles. “Paragon Patio is essentially an internal Facebook,” explains Dunckel.

While Paragon continues to engage in traditional marketing, the company is tipping the scale more toward social media marketing.

Eric Brown approves. He refers to social media as outreach on steroids. “You reach a much broader range of people. Traditional marketing is sort of like taking a bull horn and shouting at a large group of people. You may get to a small group of people, but with social media, you are reaching smaller groups that are likeminded, at least in the products they like. I think the traffic quality through social media is better and the closing ratio for rentals is much higher.”

Basically, he says, if your social media campaign or strategy is not delivering more rentals to you, it’s just a hobby. “The only reason to do this is to get more rentals and increase retention. The purist social media folks get hung up on conversations and connecting people etc. and it is all that but the bottom line is we need more rentals,” says Brown.

The key here is to have a complete strategy. So a property manager might have a Facebook page and a Twitter account and many other social networking tools, but eventually it’s about connecting the dots and having an overall strategy, Brown adds.

According to Kirsten Osolind, president of RE:INVENTION Marketing, a marketing and PR firm, which has several clients in the multifamily space, there is a movement happening in the sector. “It’s not just apartment communities and companies that are testing the waters. Service providers are bringing helpful tools like online bill pay and roommate relationship building tips to renters via blogs, Twitter, and YouTube channels,” says Osolind.

According to Twitder (an online directory of Twitter users), there are at least 96 apartment communities on Twitter, many of which also have blogs. Other initiatives, like RentJungle’s apartment search and sharing Facebook application that allows renters and landlords to discuss apartments without leaving the Facebook site, are mushrooming across the multifamily landscape. The message, even if it’s not intended, is that social media is no longer an option but a must-do for businesses hoping to thrive.

But Ryan Slack, CEO of GreenPearl Events, is not all that much on board with social media and its applications in the multifamily space. “Social media is not very helpful in connecting business to business, so when you are trying to reach other people in the industry, Facebook and Twitter are not the right approach. They can even cheapen your brand. The problem with it is that you end up reaching a lot of people you don’t want to reach. If you have a group, you end up having a lot of people who are poaching. From that perspective I find social media to be a hassle,” says Slack.

Even in the space where social media can be effective (in connecting apartment communities to residents and prospective renters, according to Slack) he finds it to be a problem. “Managers and owners have to go wherever their residents or potential residents are—the latest watering hole on the Internet—but when it becomes the place to go to, promotional activities kind of take over that space,”

However, Slack does not deny social media’s usefulness to managers and owners in making those connections and in creating an environment where residents could share stories.

“Most importantly, the strategy practiced by multifamily managers and owners should be that of defense and listening. They need go into the market and hire young savvy people or create groups who can listen in on what’s being said about their properties. Social media outreach should be thought through, and people doing this should be aware of issues such as privacy, controlling access to various group, fair housing policies etc. It’s all about preserving the integrity of what you are doing,” says Slack.

For developers, social media can be a good place on which to create buzz around their project and post updates, photos, etc.

In the condo sales arena too, social media has assumed a role of importance. Alan Mark, The Mark Co.’s founder and president uses it for sales and marketing of his condos. The company, a residential real estate sales and marketing, market research and product design firm,  has been using Facebook and Twitter for two years.

“While using social media, Gen Y buyers are the main target for us and to a large extent Gen X too,” says Mark. The company is very careful in its approach. They don’t update any of the accounts everyday because Mark believes people get annoyed of being bombarded with messages.

Of course, all these messages could be falling on deaf ears, so it’s crucial to measure the response to social media efforts by asking the right questions. The Mark Co., for example, specifically asks buyers at the time of closing where they first heard of the condo. “We have definitely had buyers directly through Facebook,” he says.

Mark’s philosophy on social media is similar to Brown’s and Dunckel’s. “You can’t say I am only going to do this. It has to be a combination of different things. Social media is a great vehicle/tool but there has to be a strategy.” When it comes to negative remarks on The Mark Co.’s Facebook or Twitter pages, they have a meeting about it and decide whether it is worth it to take the comment down or to respond to it. “If it’s a real issue that people are complaining about, one should of course try to resolve it,” says Mark.

Here are some innovative ways apartment complexes and companies can use social media to build their online reputation: 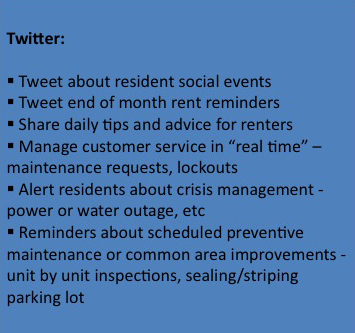 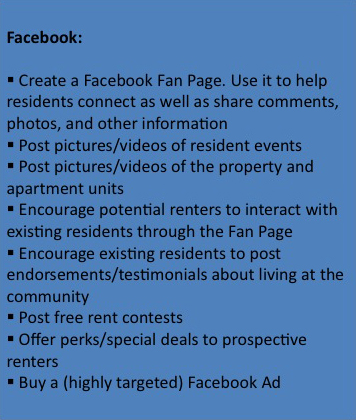 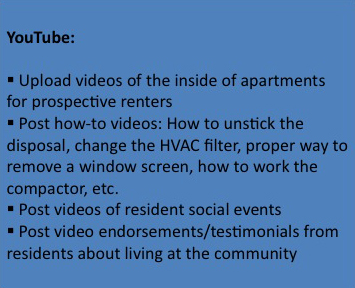 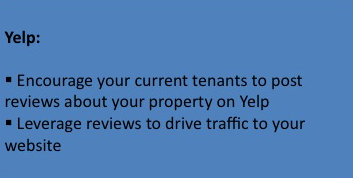