Named for its abundance of planned amenities, the Trove will be a 401-unit community in Arlington. 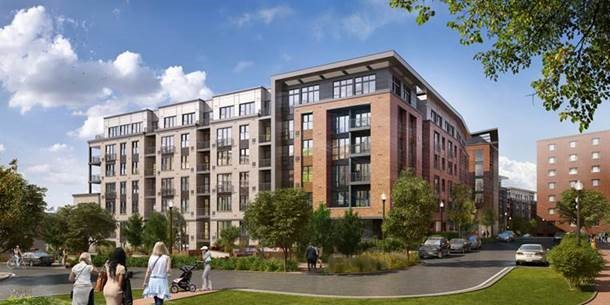 Two years ago, Washington REIT acquired The Wellington, three buildings constructed in 1961 on a 14-acre site, with a total of 711 apartments. After the sale, Washington REIT began an extensive renovation program, which is still underway.

“We call it The Trove because it will be a treasure trove of desirable features that will set it apart from other new apartments in the Columbia Pike neighborhood,” Nicole Morrill, Washington REIT’s senior director of development, told MHN. “In addition to offering abundant and unique amenities, the Trove will also appeal to renters because it will provide a location that is both convenient and accessible yet also a bit quieter than that of competing apartments given its perch overlooking the Army Navy Country Club.”

When completed in 2019, the property will include three new seven-story buildings and will consist of studios to three-bedroom units, all built to LEED Silver certification. Some apartments will enjoy views of the Army Navy Club golf course on one side, and city vistas above the tree line on the other side. Within sight are the sleek new Air Force Memorial, the Washington Monument and the US Capitol dome.

The Trove will feature stellar amenities including a rooftop deck, a pool, cabanas, amphitheater-style decking, fire pits, grills, large screens for movie nights and communal dining tables. There will also be a luxurious club room with a fireplace, gourmet kitchen, multiple TVs, pool table and a variety of areas for seating and dining.

Additionally, residents have access to a double-height fitness center that opens up onto an interior courtyard, providing both interior and exterior fitness space. There will also be a large bike maintenance and storage room with numerous repair stations, as well as pet grooming facilities. A publicly accessible pocket park with a bocce court and ample seating areas will be created within the community, along with new sidewalks and roads.

“Most of the rental apartments in this submarket were built decades ago. The newer communities delivered over the past decade lack the amenities that the Trove will provide,” Morrill said. “This submarket continues to grow and the location continues to be an attractive one due to proximity to jobs, transportation thoroughfares, and entertainment options.”

The new construction is taking place on the former site of extensive surface parking lots. All three new buildings will wrap around structured parking.

“Washington REIT is pursuing a value-add strategy for our investors in the mixed-use, retail, multifamily, and office sectors,” Morrill said. “Washington REIT’s development projects not only increase shareholder value, but they are adding value to the communities where they are located as well.  The Trove is an excellent example of how we are implementing this vision.”