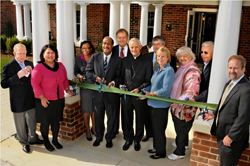 The 86-unit property was made possible through a partnership with the Montgomery County Department of Housing and Community Affairs, the Housing Opportunities Commission of Montgomery County and Capital One, N.A.

“Victory Housing’s mission is to build, acquire, renovate, manage and operate affordable housing and to provide related services for low- to moderate-income seniors,” Jim Brown, Victory Housing’s president, tells MHN. “Victory Court meets this mission by providing affordable housing in a safe, home-like atmosphere that is designed for their comfort.”

“Victory Court is appealing to seniors because of the home-like atmosphere and the amenities offered, such as a library, multi-purpose room with pantry, community/TV room, billiards room, arts & crafts room, exercise room, wellness center and a courtyard with patio and gazebo,” Brown says. “In addition, the units are well-appointed with washers and dryers, and microwaves.”

The building is also designed with an eye towards bringing residents together for social activities.

Victory Court is the first such housing ever built on Montgomery County-owned land in the City of Rockville.

According to Brown, based on the 2000 Census, as well as 2011 estimates, data shows that older adult households are increasing at a significantly higher rate than that of all households in the Victory Court market area and the trend is expected to continue.

Victory Housing Inc. currently owns 28 communities comprising 1,911 apartments for seniors and families in Maryland and the District of Columbia.