Cushman & Wakefield's latest retail research report points to urban development as one of the key drivers behind Miami's emergence as a retail giant.

Miami—The weather isn’t the only thing heating up in Miami. Cushman & Wakefield‘s recently released white paper, Miami Retail: Reinventing Itself, discusses the 305’s steady rise as a retail giant across the globe and examines the key factors driving the city’s success on the retail scene, including the strong development and growth of its urban core. 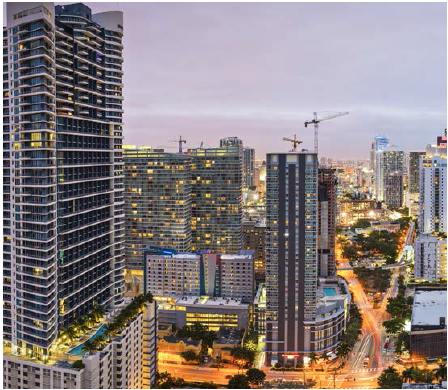 Over the past 15 years, the population in the city’s mainland core markets has expanded by a massive 93.1 percent as the number of households within these trade areas has more than doubled. Urban revitalization has been a major trend, with developers adding more than 37,000 new multifamily housing units (including both condominiums and apartments) in Miami-Dade county between third-quarter 2006 and third-quarter 2015, according to the report, which was authored by Cushman & Wakefield Vice President of Retail Research for the Americas Garrick Brown in support of the South Florida retail brokerage team of Senior Director Greg Masin, Associate Director Frank Begrowicz and Associate Andrea Vigil.

It goes on to say that this growth will only intensify as Cushman & Wakefield continues tracking about 24,000 multifamily units currently under construction in the county and an additional 30,000 units in various stages of proposal. This is the highest level of multifamily development that the market has seen since the late 1980s boom, and the county’s occupancy rate is at a healthy 97.1 percent.

This urban growth has been accompanied by an increase in the affluence of the population as well. The number of lower- and middle-class households in Miami-Dade County fell slightly from 2009 to 2014, according to the latest United States Census Bureau data, while the number of high-income households grew exponentially.

Millennials and empty nesters (mostly baby boomers) have also driven Miami’s population growth trends and demand for urban multifamily product, the report said. The 25- to 34-year-old age bracket contributed the strongest growth in Miami-Dade County from 2007 to 2012 with a 20.7 percent growth rate and accounting for roughly 80,000 new residents. The 55- to 64-year-old age demographic increased by 14.1 percent (38,000 new residents) and the 18- to 24-year-old bracket grew by 7.8 percent (19,000 new residents). These two demographics are attracted to cities like Miami because they look for 24/7 cities that offer live/work/play environments, the report said.

The multifamily housing demand is evident in Miami with the county’s apartment vacancy at just 2.9 percent as of third-quarter 2015, down from 3.2 percent at mid-2015. Average asking rent per unit has also increased in the county, standing at $1,219 per month. Although it is submarket specific, overall asking rates have increased by 28.2 percent despite the fact that more than 15,300 new rental units have delivered over the past five years, the report said. Cushman & Wakefield expects a slight uptick in vacancy levels as a result of new product coming to the county, but that rent prices won’t go down. Increasing rental rate growth combined with strong residential development and tight vacancy have combined to create this retail development boom.

“Miami’s retail scene is more vibrant and diverse than ever,” said Masin. “It’s being driven by an incredible demographic profile and rock-solid market fundamentals. It’s like nothing we’ve seen before and we’re very bullish on the future of retail in Miami.”