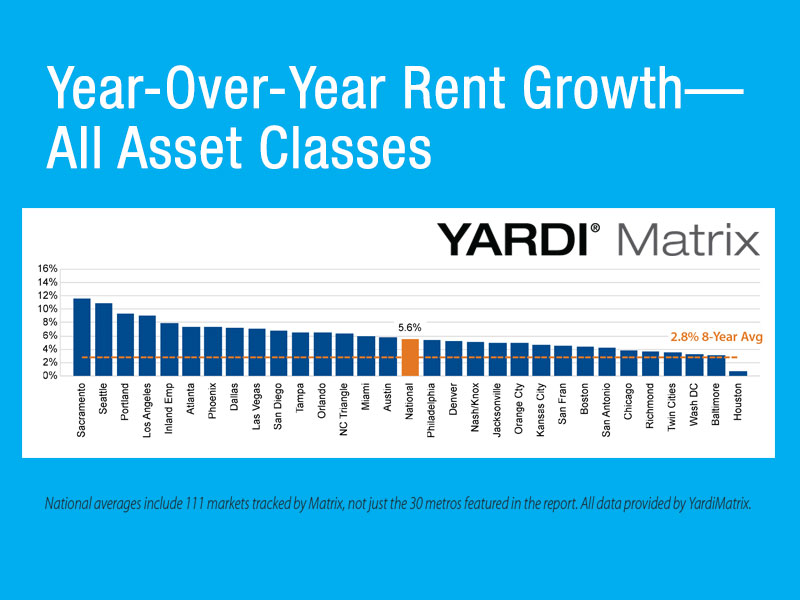 As the media is abuzz with talk of Brexit’s impact on the U.S., the multifamily industry is questioning whether Britain’s vote to leave the European Union will affect this currently booming market. In Yardi Matrix’s monthly report, the topic of Brexit was addressed along with the usual recap of market trends and rent growth. “We foresee little immediate impact on the U.S. multifamily market, largely because the United States is a relatively small trading partner,” the report stated, “but the real danger is the potential that the process of splitting the European Union could create upheaval in global financial markets.”

The report contends that since less than 4 percent of U.S. goods end up in the U.K., it is unlikely that reduced demand from Britain would have a major impact on the U.S. GDP. As the report adds, “For one thing, it’s hard to say when changes in policy might take effect. Britain has as long as two years to negotiate terms of its withdrawal, and there are indications that new leadership may want to drag that out.”

For now at least, the market is looking healthy and stable. June marks the third straight month of double-digit gains with U.S. apartment rents rising another $10, according to Yardi Matrix’s monthly survey. While moderation has been anticipated all year, it didn’t come in June, with its 0.9 percent increase to an all-time high of $1,213. However, despite clearly strong rent gains, year-over-year rent growth fell 30 basis points in June, indicating moderation on the horizon.

Year-to-date rents have increased 4.2 percent, almost reaching Yardi Matrix’s full-year forecast estimate. The report adds that seasonally, the second quarter apartment rent figure is usually above average, so while it’s possible that most of 2016’s rent gains are in the rearview, it’s also possible that rent growth will continue to increase. As demand is remaining high, occupancies of stabilized properties are level or even improving in some areas as more supply is created.

The trailing 12-month figures, which compare the change in average rent to that of the preceding one-year period, reflected a 6.2 percent increase in June, a number that has stayed mostly consistent since May. Rents fell 10 basis points on a trailing twelve-month basis, due to a slight dip in Lifestyle rents from 5.8 percent to 5.9 percent. The Renter-by-Necessity segment remained unchanged at 6.5 percent.

As for top metros, the West Coast continues to exceed the national average with strong performance in Portland, Sacramento, Seattle, San Francisco, Los Angeles, the Inland Empire and San Diego. Southern star performers Atlanta, Orlando and Tampa are all counted amongst the top 10 metros. While the report says it is “too soon to tell,” recent strength in the North and East among Lifestyle properties could spur a shift.