Top Markets for Multifamily Construction in 2020 – Part I

COVID-19’s impact on multifamily development varies widely by location. In the first of two parts, we draw on Yardi Matrix data to identify the sixth through 10th most active markets nationwide.

Multifamily fundamentals have taken a hit due to the COVID-19 pandemic, not just in declining asking rents, but also in dwindling construction trends. While multifamily development fared better in some parts of the country, other areas saw the construction sector take some dents. Using Yardi Matrix data, we’ve looked at the top 10 markets with the highest number of units that have started construction between January and May 2020, and compared them with the same period in 2019.

Six of the top 10 metros saw the number of multifamily developments and units drop significantly. West Houston fared the worst, with its new inventory dropping by more than 3,000 units compared to January 2019 through May 2019. Still, health-care crisis notwithstanding, the country’s housing woes haven’t relented. Four of the markets show an increased volume of units that broke ground in the first five months of 2020. Below, we’ve analyzed the lower five entries of our top 10 list. 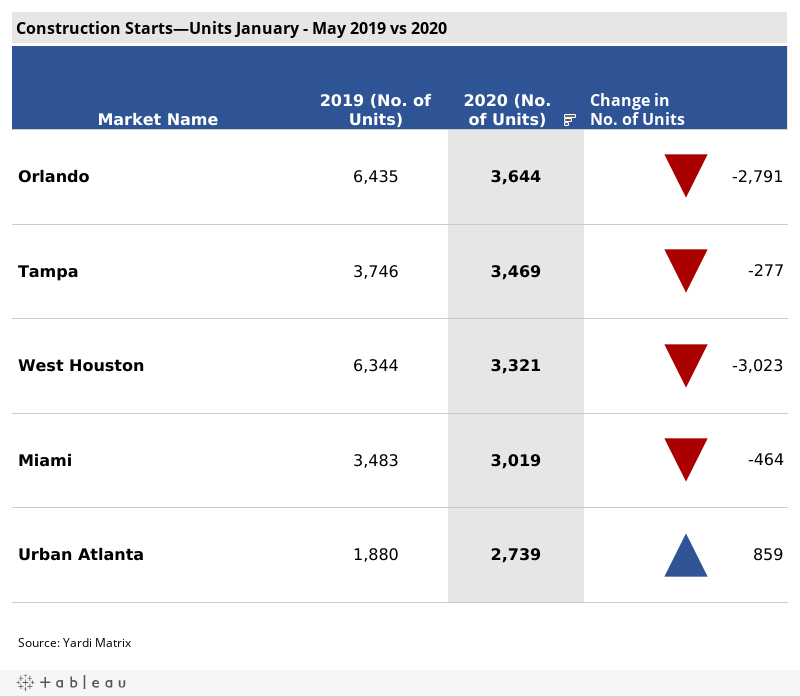 Overall, in June 2020, the market had more than 15,000 units in 57 projects under construction, 9,600 of which were slated for completion by year’s end. In 2019, Atlanta marked a 1.2 percent year-over-year demographic expansion, well above the 0.3 percent national rate. The metro’s rapidly rising population maintains its robust demand for housing. The development boom of recent years has continued, sustained by Mayor Keisha Lance Bottoms, who deemed the sector an essential service following the COVID-19 outbreak.

Between January and May 2020, 2,739 units in 10 properties broke ground in Urban Atlanta, while, during the same period last year, only 1,880 units in seven communities started construction. The Midtown West/Centennial Place submarket had five new projects breaking ground during this period, for a combined 1,516 units.

The largest project to break ground so far in 2020 is located on a 12-acre site in an Opportunity Zone at 485 John St. NW. Herndon Square, owned by Hunt Cos., is a mixed-use development with 36,500 square feet of retail space, and will be built in five phases. Upon its 2027 completion, the $166 million project will consist of market-rate units, affordable housing, senior housing and several townhomes.

With an economy heavily dependent on tourism, Miami’s multifamily market faces a challenging year ahead, as one-third of its labor force is in high-risk sectors impacted by the pandemic. In addition, a consistent portion of the multifamily and condos inventory caters to foreign occupants, and demand from this group has also decreased considerably as a result of the virus. Still, multifamily development had more than 19,500 units in 66 properties underway in June, of which about half are estimated to come online by the end of the year. Like the rest of the country, the health crisis is expected to cause delays across all property types currently under development.

In the first five months of 2020, 3,019 units in 13 properties broke ground in the metro, 464 fewer than in the same time frame last year. Development activity slowed considerably following the outbreak, even though construction was deemed an essential service in Florida. In April and May only three new properties broke ground.

READ ALSO: Building in the Time of COVID-19

Development was most intense in the Little Havana submarket, with three new developments breaking ground for a combined 570 units. The largest multifamily asset that started construction this year is the second phase of Link at Douglas Station, a 36-story, 421-unit tower complemented by 17,000 square feet of retail space, located at 3060 SW 37th Court in the Coconut Grove area. The project is being built by Adler Group in partnership with 13th Floor Investments, with the help of a $47 million construction loan issued by TD Bank, and is slated for completion in 2022.

COVID-19 and the global oil crisis have pushed oil prices to an 18-year low, and the impact on the energy sector has had a ripple effect throughout the metro. In June, there were more than 19,000 units under construction, and more than half have a completion date set for 2020. However, even though construction was deemed essential following the outbreak, delays will likely occur as, in addition to disruptions in the supply chain, many developers had temporarily closed their doors.

Between January and May 2020, 3,321 units in 11 properties broke ground in West Houston—a 3,023-unit drop relative to the same time last year. February marked the best month for multifamily developments—construction started on seven projects, totaling 2,063 new units to be delivered in the metro.

West End/Downtown had the bulk of the assets that broke ground in 2020, with 1,956 units in six properties underway. The submarket also holds some of the largest projects under construction, including the 304-unit Alta River Oaks, a Wood Partners asset situated at 3636 W. Dallas St., anticipated to come online by the end of 2020.

Tampa had nearly 12,000 units in 51 properties under construction, as of June. Roughly 4,000 units of these are slated for completion by the end of the year.

In 2020 through May, 3,469 units in 15 properties started construction, just 277 units below last year’s volume during the same period. January marked the best month of the year in construction starts, with 1,406 units in six properties. During this time, developers showed interest in several submarkets, with Hyde Park/Davis Island, Lakeland Highlands, Gulfport/Lealman and Dade City each with two new developments underway. In Downtown Tampa/Ybor City, three developments totaling 812 units broke ground in the first five months of the year.

The largest new project is located in one of Hyde Park/Davis Island’s Opportunity Zones—1011 East Cumberland—a 388-unit, 23-story property with 13,000 square feet of retail space. The Strategic Property Partners asset is anticipated to be completed by mid-2022.

The health crisis is already leaving its mark across the metro’s economy. Travel restrictions and stay-at-home orders isolated the metro, and Walt Disney World and Universal Orlando furloughed, laid off and reduced paychecks of tens of thousands of employees. This has spilled over into the multifamily market’s rent growth, down 0.4 percent year-over-year through April, marking the steepest decline among major U.S. metros.

On the development side, the metro had more than 18,000 units underway in June, 3,644 of which broke ground between January and May 2020 in 12 communities. By the end of the year, some 9,500 units are anticipated to come online.

The new developments are spread across the metro, with each of the 12 projects underway located in a different submarket. Notable projects include the 368-unit, 11-story Orange and Robinson, an MAA asset located at 336 N. Orange Ave. and slated for completion in 2021.

Yardi Matrix covers all multifamily properties of 50-plus units across 133 markets in the United States. This ranking reflects deliveries within that sample group.