Top CEOs Weigh In on 2018 Prospects 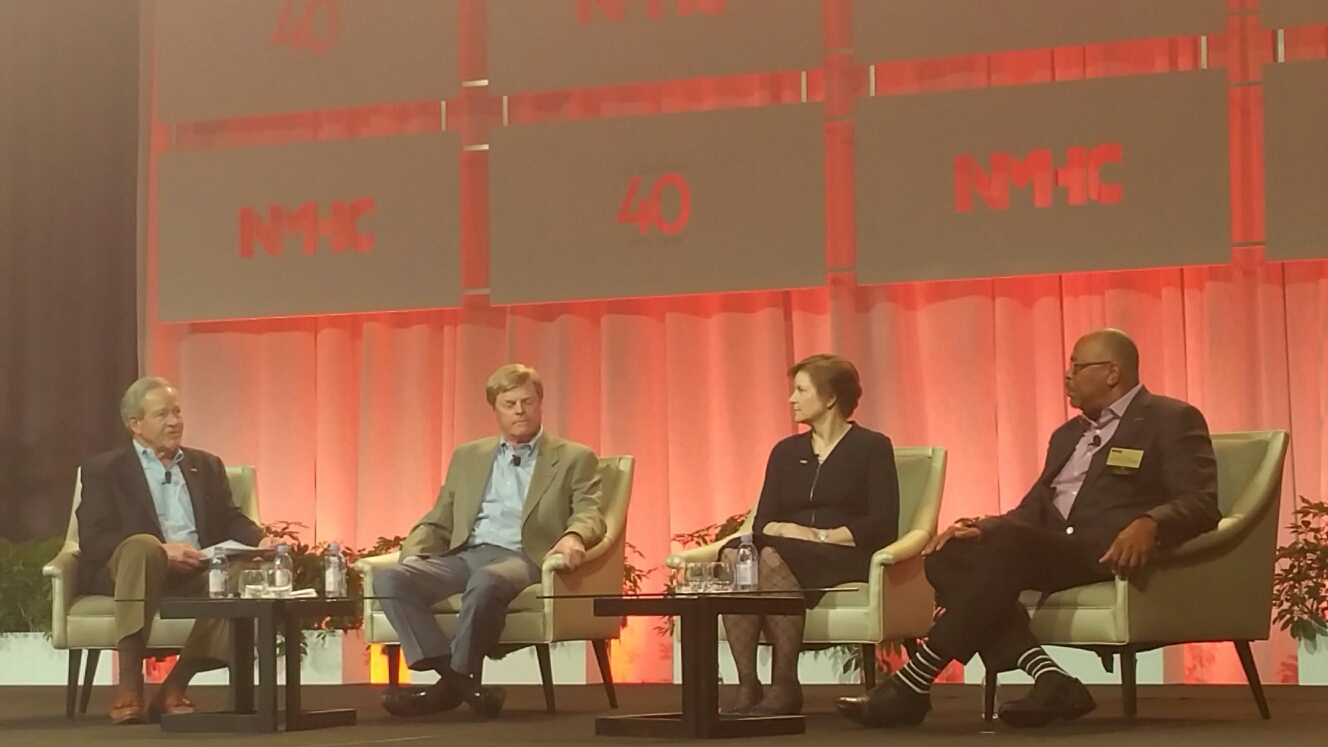 What’s ahead in 2018? The multifamily industry is focused on that question, and three of the industry’s top CEOs tackled it on Tuesday at the National Multifamily Housing Council’s annual Apartment Strategies Outlook Conference in Orlando.

In a wide-ranging conversation with NMHC President Doug Bibby, the organization’s past, present and future chairmen offered a complex forecast. Among the highlights: plenty of runway and investor interest, moderating rent growth in some markets, formidable operational challenges and potential trouble spots.

Bob DeWitt, president & CEO of GID and NMHC’s current chairman, suggested that he would welcome a moderating trend in development. “I think tapping the brakes is appropriate,” he said. Robust demand will absorb the product currently in the pipeline, but, he added, “I wouldn’t be unhappy to see less new product” come on line in 2018. Rent growth is moderating in core urban markets, noted Gables Residential President & CEO Sue Ansel, who will succeed DeWitt as NMHC chairman.

“The one thing I tell my team constantly is the last seven years have been the golden years of making money” in the multifamily sector, said Daryl Carter, founder & CEO of Avanath Capital Management. He said he tells the Avanath team that those golden years may be behind us, and that they will have to work harder to make the most of opportunities.

One economic indicator Carter said that he will watch closely is area median incomes. The company-wide wage increase announced on Jan. 11 by Walmart will boost area median incomes widely because of the size of the giant retailer’s workforce. As a result, Carter noted, “We see an ability in our affordable properties to raise rents.”

The CEOs identified operations challenges, as well. DeWitt cited the need to find and retain property managers. Ansel specified maintenance workers, especially because of the increasingly complicated systems that characterize today’s communities. High on Carter’s wish list is “the ability to capture real-time data on a real-time basis.” That would enable operators to quickly detect issues like a drop in occupancy, he explained.

In one segment, Bibby asked the panel to identify the number-one misconception about the sector, particularly among the offshore investment partners who are demonstrating increasing interest in multifamily assets. DeWitt cited an inadequate grasp of the difficulty related to quickly pivoting from one investment strategy another. Ansel pointed to overestimation of the importance of Millennials and an underestimation of the importance of Baby Boomers.

Avanath recently enlisted its first offshore partner, an investor from the Netherlands, and he offered a different perspective. In at least one respect, some investors from Western Europe have a leg up on their domestic counterparts. “They actually get the need for affordable workforce housing (better) than most investors here in the U.S.”

On the regulatory front, DeWitt raised a red flag about California’s proposal to allow municipalities to impose rent control, which he called potentially “the biggest existential threat to the industry.” If successful, California’s move could easily spread to other high cost-of-living states, like New York, New Jersey, Massachusetts, Illinois and Oregon, he warned.