Despite the vast majority of recently delivered communities being classified as luxury rentals, many of the biggest projects underway contain significant affordable components.

With more than 50,000 jobs added to the D.C. economy since June 2017, population growth has continued to soar. As the population expands, multifamily projects have taken off—about 60,000 units were delivered in the market since 2014.

While the overwhelming majority of recent deliveries have been in the upscale segment, a growing number of affordable units are making their way into the pipeline—of the approximately 100 communities underway, more than one third have an affordable component, per Yardi Matrix data. Washington’s Barry Farms/Saint Elizabeths is currently the hottest submarket for development, with more than 4,000 units underway, according to the data provider. The Brentwood/Trinidad/Woodridge submarket has 2,600 units under construction, the second largest contributor to the metro’s robust rental pipeline.

The list below highlights the 10 largest communities underway in the Washington, D.C. metro area. 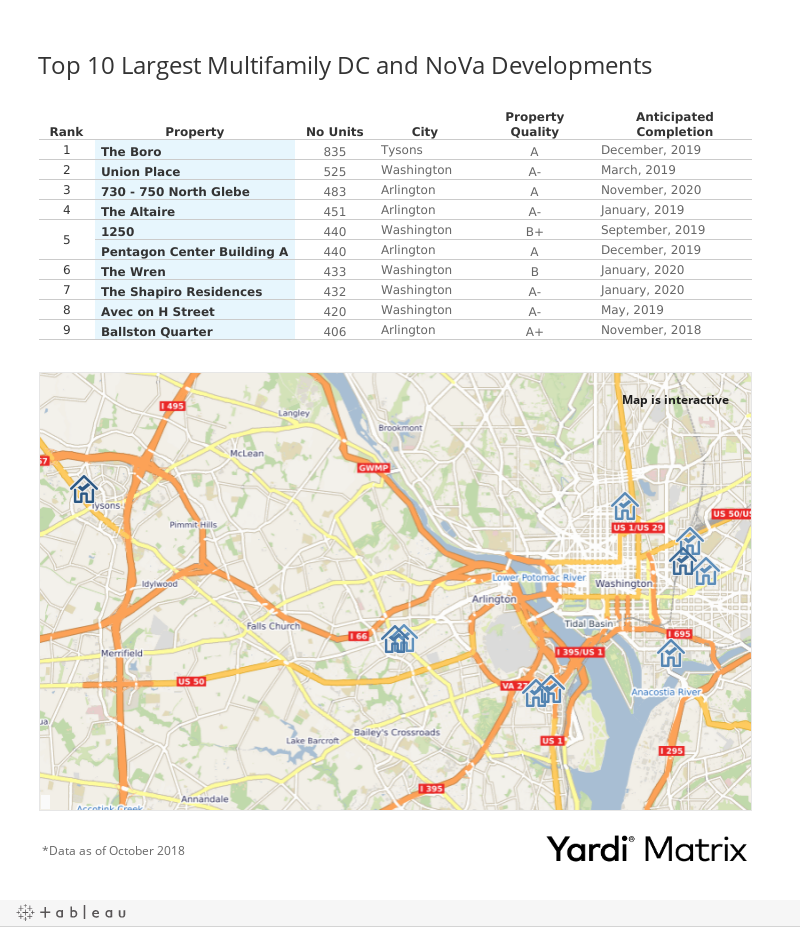 Forest City Enterprises’ Ballston Quarter is a large, mixed-use redevelopment of the Ballston Common Mall, slated to feature 406 multifamily units in addition to significant retail and office space. The 22-story residential tower began construction in late 2017, and the project is anticipated to deliver later this year.

The development site at 4238 Wilson Blvd. in the Ballston/East Falls Church/Seven Corners submarket is positioned just south of the Ballston-MU Metro station and 1 mile from Interstate 66. Plans for the community call for a range of amenities, including a fitness center, a business center and nearly 300 underground parking spaces.

Rappaport and WC Smith broke ground on the 420-unit Avec on H Street in October 2017. The mixed-use development will include 44,000 square feet of street-level retail and 40 affordable apartments upon completion in May 2019.

Located a mile from Union Station, at 901 H St. in the city’s Brentwood/Trinidad/Woodridge submarket, the eight-story building’s project site is positioned in the heart of an important retail corridor. The development will feature a rooftop swimming pool, and 430 subterranean parking spaces. A D.C. Streetcar station and several bus routes operate in the near vicinity.

7. The Shapiro Residences in Washington, D.C.

Under development by a joint venture between EDENS and Trammell Crow Residential, the 432-unit partially affordable Shapiro Residences kicked off construction in mid-2016, with an expected completion in early 2019. The lower floor is an adaptive reuse of a former warehouse, with a restored façade.

Positioned at 1270 Fourth St. in Washington D.C.’s Brentwood/Trinidad/Woodridge submarket, the 1.1-acre site is just south of U.S. Route 50 and within half a mile of Gallaudet University. The 11-story building will be served by public bus routes and a nearby station on the Metro’s Red Line.

A partnership between MRP Realty, Ellis Development Group and JBG Smith Properties is constructing The Wren, a 433-unit partially affordable community in Washington’s Brookland/South Petworth submarket. The 10-story project broke ground in December 2017, and completion is slated for 2020.

Located at 965 Florida Ave. N.W., the development is designed to achieve LEED Silver certification. Whole Foods has plans to open a 43,406-square-foot grocery store at the ground floor, with additional retail units available for lease. Community amenities will include a rooftop pool deck, a two-story fitness center, a clubroom and 343 parking spaces.

Jair Lynch Development and MacFarlane Partners joined forces to build 1250, a 440-unit market-rate community in D.C.’s Barry Farms/Saint Elizabeth submarket. While site excavation work started in 2007, the site remained dormant for nearly a decade, with construction beginning in early 2017. The developers anticipate the property will open its doors in late 2019.

Positioned on a 0.6-acre site at 1250 Half St. S.E., the community’s two 10-story buildings will rise near Nationals Park. Approximately 60,000 square feet of retail space, marketed by KLNB, will occupy the first two floors. The Navy Yard Metro station, two blocks away, connects the development to the rest of the city.

5. Building A of the Pentagon Centre in Arlington, Va.

As the first luxury multifamily component of the $164.5 million mixed-use Pentagon Centre redevelopment project in Arlington, the 440-unit, 26-story Building A is slated to open by the end of 2019. The first phase of the larger development includes more than 360,000 square feet of retail, according to plans filed with the city, with 29,094 square feet at the base of the residential tower.

The construction site is situated at the intersection of South Hayes Street and 12th Street South, next to the Pentagon City Metro station. Floorplans for the community’s studio, one-, two- and three-bedroom units range in size from 442 to 1,632 square feet.

4. The Altaire in Arlington, Va.

The Altaire, LCOR’s 451-unit partially affordable development at 400 Army Navy Drive in Arlington, is rising at the former site of the Paperclip Building, an office mid-rise built in 1967 and demolished two years ago. Construction of the two 20-story buildings—slated to open in early 2019—was funded by Wells Fargo in 2016.

The community will contain a mix of studio, one-, two- and three-bedroom apartments, with floorplans between 522 and 3,028 square feet. The structures are designed to achieve LEED Gold certification, and planned on-site amenities include a penthouse lounge, complimentary Wi-Fi, a fitness center and a sky lounge.

Saul Center’s 483-unit 750 N. Glebe Road development in the Ballston/East Falls Church/Seven Corners submarket is underway as of July, with completion estimated in 2020. Targeting LEED Gold certification, the 12-story community will sit atop more than 60,000 square feet of street-level retail.

The development is positioned amidst a number of major employers, including Accenture, the Defense Advanced Research Projects Agency, the Office of Naval Research and Capterra. The location is a 5 minute walk from the Ballston-MU Metro station.

The property, rising at 200 K St. N.E., will contain approximately 16,400 square feet of street-level retail, and community amenities will include a fitness center, swimming pool, clubhouse and children’s playroom.

The largest multifamily property underway in the D.C. metro area, The Boro is an 835-unit mixed-use luxury community in Tysons, Va. Under development by a joint venture between Rockefeller Group and Meridian Group, the project is designed for LEED Gold certification and is expected to wrap up late next year.

The 3.7-acre development, located at the intersection of Westpark Drive and Leesburg Pike, comprises four structures, with the highest, 31-story tower offering views of Downtown Washington. On-site amenities include a 27th-floor club room and fitness lounge, a rooftop swimming pool and structured parking. The property will be a short walk from the Greensboro Metro station and a variety of shopping and dining options.