The metro has come a long way in addressing its affordable housing problem, with more than 2,000 units delivered during the last four quarters.

Denver’s rampant rate of deliveries has resulted in quick dilution of stock, moderating demand and dampening overall rent growth in the Mile High City of late—at 1.9% year-over-year as of August, per Yardi Matrix data. With the bulk of incoming inventory focused on upscale properties that can net higher yields for developers, affordable options have generally lagged. Since 2016, when the city allocated $150 million in funding for low-income housing—an amount which was recently doubled—officials have been working to attract investments in this segment. As a direct result, incoming affordable inventory is on the rise.

According to Yardi Matrix, there were 15 fully affordable properties completed in the Denver metropolitan area during the past 12 months, adding approximately 2,000 units to the existing stock. The largest communities range in size between 100 to 240 units. 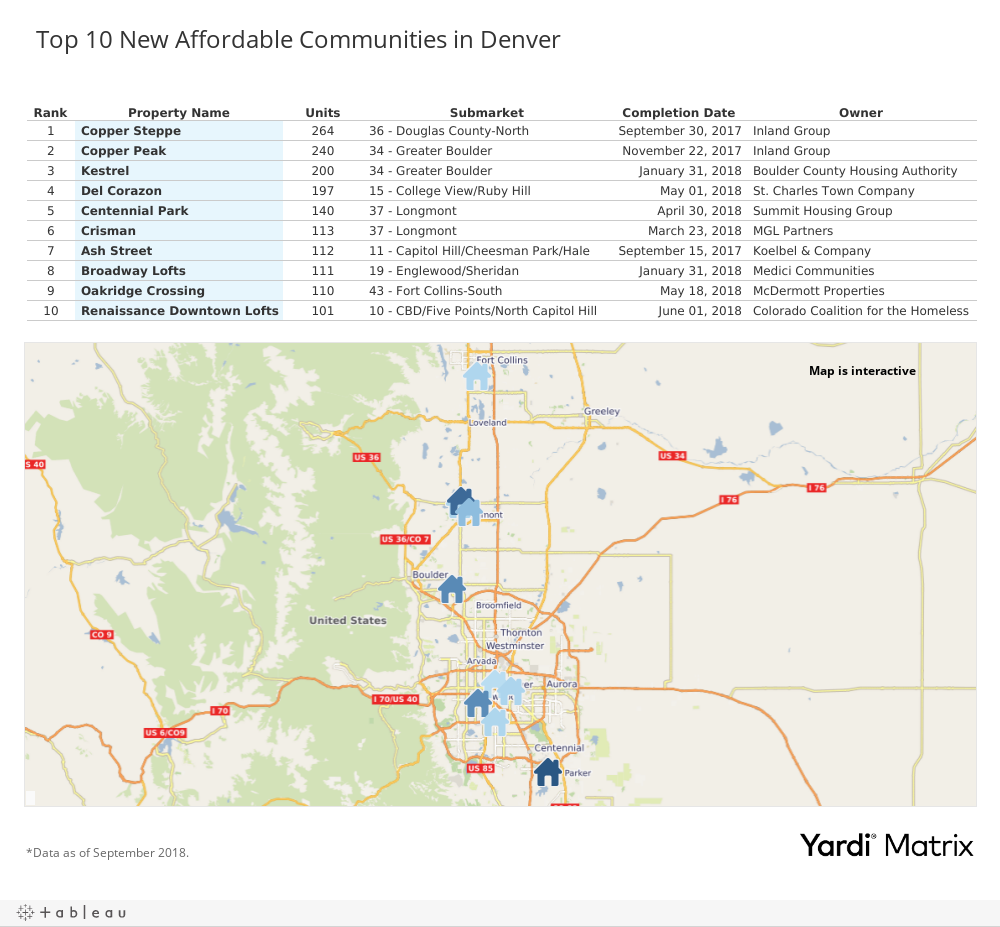 Located at 2075 N. Broadway in the city’s CBD, the community offers 101 one- and two-bedroom units ranging between 460 to 800 square feet. The owner, Colorado Coalition for the Homeless, broke ground on the property in the summer of 2016 with the help of a $12.5 million secured from Wells Fargo Bank. Part of the loan was refinanced last year. All units are furnished and feature above-standard ceiling heights and high-speed internet access. Electricity is partially covered by a solar electrical system integrated within the property. Public transportation is available less than two blocks away from the property. Amenities offered at Renaissance include a business center, community room, laundry facilities and covered parking on the property’s first floor.

This 110-unit community was recently completed at 4786 McMurry Ave. in the Fort Collins-South submarket. McDermott Properties and Brinkman Partners broke ground on the property in 2017, after securing three loans totaling $25.3 million. The originators were Colorado Housing and Finance Authority Multifamily Revenue Bonds ($16.2 million), Boston Capital ($7.4 million) and State of Colorado ($1.7 million). 85 of the units feature one-bedroom floorplans, while the rest have two bedrooms. The community includes 5,000 square feet of retail space at the first floor, a fitness center, business room, community room and three laundry facilities. Oakridge is age-restricted—for seniors age 62 and older—and is managed by CompCap Management.

Medici Communities started building Broadway Lofts in 2016, financing it through a variety of private and public funds. The 111-unit property is located at 3401 S. Broadway St. in the Englewood/Sheridan submarket and provides high-quality amenities and features, including washers and dryers in each unit, a rooftop terrace, business center and fitness center. In addition to the residential component, the asset features 11,000 square feet of retail space on the first floor. The Swedish Medical Center and Craig Hospital are located only a few blocks away.

When the Ash Street community opened last summer, it marked the earlier completion of Mayor Michael Hancock’s five-year affordable housing program. The 112-unit property is located at 1170 Ash St. in the Capitol Hill/Cheesman Park/Hale submarket and offers one-, two-and three-bedroom layouts. Units at the community are made available for households earning up to 60 percent of the area income. Koelbel & Co. built the community in a joint venture with Mile High Development with $19.5 million financing from public partners including the Denver Office of Economic Development, Colorado Housing and Finance Authority and the Colorado Division of Housing. The community is located 2 miles away from the Denver Botanical Gardens.

The 114-unit development at 750 Crisman Drive in Longmont, Co., was designed to replace some of the affordable housing lost in the 2013 floods. Solvera and Colorado Housing & Finance Authority were the sponsors of the project, with MGL Partners being the owner of the three-building property. The community provides one- and two-bedroom apartments, a fitness center, a club house with free Wi-Fi, a covered parking and business center and is located less than 3 miles from the City of Longmont Roosevelt Park.

Located at 1205 Pace St. in Longmont, Colo., the 140-unit community is located between the City of Longmont Roosevelt Park and Union Reservoir Nature Area. Its construction was financed via public and private loans totaling $40.5 million. Of that, $15.5 million was issued by Colorado Housing and Finance Authority while the rest was secured by JPMorgan Chase. Summit Housing Group is the landlord of the property with Highland Property Management as manager. Centennial park residents can choose among one-, two-, three- and four-bedroom apartments ranging from 900 to 1,350 square feet. Washers and dryers are available in all units.

A St. Charles Town Co. project, Del Corazon broke ground in the fall of 2016 on two parcels located at 4351 on both sides of Morrison Road. The community encompasses 197 one-, two- and three-bedroom units equipped with washers and dryers, a fitness center, business center, club house and playground. The landlord worked with Denver Botanical Gardens to add vegetable gardens, a plaza at the intersection of Ohio and Morrison Road and a futsal soccer court for the residents. The project is also Energy Star certified having several sustainable elements included. The architecture has Latino culture influences.

The Kestrel community, a Boulder County Housing Authority development, is located at 1890 Kaylix Ave. in Louisville, Colo. It encompasses 200 one-, two- and three-bedroom units, available for both families and senior residents, a community room, playground and 350 parking spaces. Last year, the project received the Denver Regional Council of Governments award for incorporating a number of sustainable and modern elements such as geothermal heating and cooling as well as low-energy use appliances into all 18 buildings. In addition, each resident receives a bus pass for free transportation as well as assistance for procuring food and health coverage.

Named after the mountains located in the nearby area, the 240-unit Copper Peak community is one of the largest affordable projects completed in Denver during the last four quarters. The owner, Inland Group, secured a $26.5 million loan in 2015 in order to break ground on the 10-building property which the company delivered in 2017. Located at 2770 Copper Peak Lane in Longmont, Colo., the community offers one-, two- and three-bedroom apartments and a number of high-end amenities which include a fitness center, playground, business center, club house, swimming pool and covered parking. Units have above-standard ceiling heights, microwaves, washers and dryers and balconies or private patios.

The largest affordable community completed in the Denver metro area during the last 12 months is Copper Steppe. The luxurious, 264-unit property is also an Inland Group asset, having been built around the same time as its sibling, Copper Peak, this time in a partnership with Douglas County Housing. The latter originated the $35 million construction loan from Citibank. due in 2048. The community is located at 10405 Vienna St. in Parker.

The ranking was based on information provided by real estate database Yardi Matrix and highlights the largest affordable communities completed in the Denver metro area during the past 12 months.